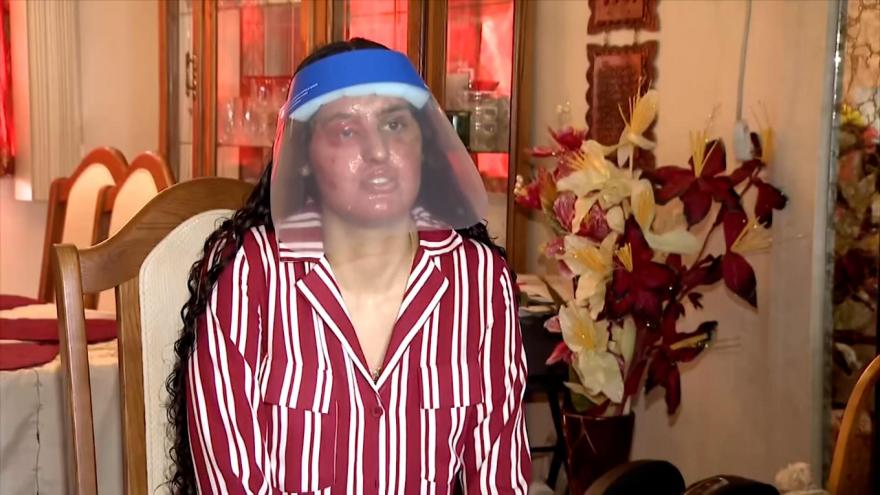 Nafiah Ikram was hospitalized for three weeks after someone threw a cup of acid in her face last month.

(CNN) -- A New York woman who was attacked in her driveway is hoping for answers, as police try to hunt down the man who threw a cup of acid in her face.

Nafiah Ikram, 21, was in the driveway of her Elmont home on March 17, when a man approached her from behind and threw a dark-colored substance in her face, according to the Nassau County Police Department.

Ikram, a student at Hofstra University, told CNN affiliate WCBS that she had just gotten home from work when she was attacked.

"I started to cry and, like, I was panicking. I was like, 'Dad, someone threw something in my face!' And he was like, 'Oh my God, it's acid,'" Ikram said.

She was rushed to the hospital and treated for serious injuries to her eye and throat and burns on her arms, the affiliate reported.

"She was in the hospital for three weeks, and she's still not able to eat properly," her father Sheikh Ikram told WCBS. "She can't see anything good. Only one eye is working."

"I can just see colors, but that's it," Ikram said to WCBS.

A surveillance camera captured video of the attack, but the suspect is hard to see. Ikram told WCBS that she didn't recognize the attacker and he didn't say anything to her. The family told WCBS that they don't believe it was a hate crime.

Nassau County Police Department told CNN that officials are looking for a man, who is approximately 6'2" tall, with a skinny build. He was wearing a black hooded sweatshirt and gloves, police said in a statement.

Police said in a tweet that they believe the suspect drove away in a red Nissan Altima. Officials are asking anyone with any information to contact Crime Stoppers

The attack has led to an outpouring of support for Ikram.

"Top Chef" host Padma Lakshmi, who said she's known the family for a decade, urged people to share any information they might have with police.

"We want to find the people that did this terrible, heinous crime to her and we need your help," she said in a video on Instagram. "This is the nightmare of any parent to have this happen to your child."

She also encouraged people to contribute to a GoFundMe account to help pay for Ikram's continuing care. The campaign has raised more than $366,000, but organizers said her medical costs are expected to be astronomical.

"Nafiah has stayed incredibly strong throughout this horrific event," the GoFundMe description reads. "Nafiah's only wish is that the attacker is caught so that she can feel safe in her own home.

Nassau County Police said they are offering a $10,000 reward for information leading to an arrest.

"My whole life changed in a matter of five minutes," Ikram told WCBS. "We don't realize what we have until it's gone."