Lollapalooza mandated vaccines or a negative Covid test. Officials say there's no sign it was a superspreader event 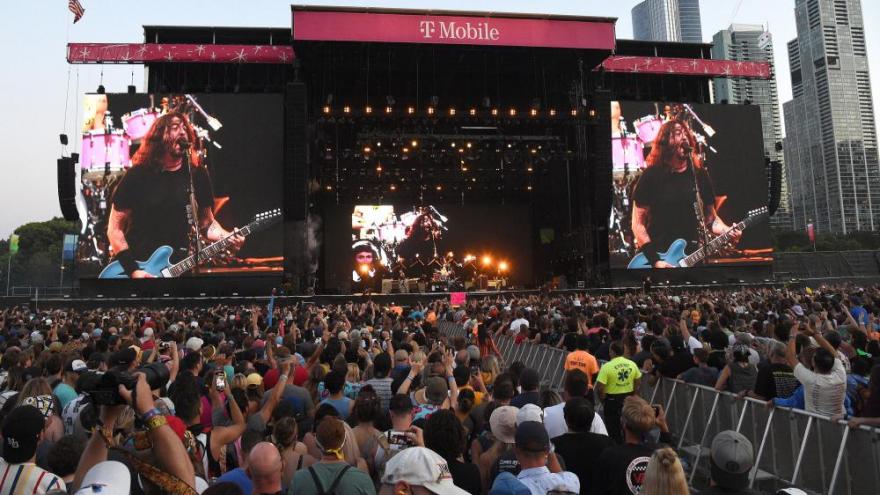 Foo Fighters performs on stage during Lollapalooza 2021 at Grant Park on August 1, 2021, in Chicago, Illinois.

(CNN) -- There is no indication two weeks after Lollapalooza that the music festival contributed to a spike in Covid-19 infections, a Chicago health official said Thursday, despite attracting an estimated 385,000 attendees.

"There's no evidence at this point of a superspreader event, and there's no evidence of substantial impact to Chicago's Covid epidemiology," Chicago Health Commissioner Dr. Allison Arwady said at a news conference.

Among several hundred thousand festivalgoers, officials have identified only 203 cases of Covid-19 about two weeks after the festival, according to Arwady. Of those, 58 are Chicago residents. Another 138 are Illinois residents and seven are from other states.

"We would have seen a surge if we were going to see a surge at this point, by my estimation," she said.

Amid climbing Covid-19 cases across the country, there were concerns Chicago's famed four-day music festival could contribute to a rise in infections when it kicked off late last month, even with the variety of mitigation strategies organizers put in place, including required proof of vaccination or a recent negative Covid-19 test.

Officials believe 90% of attendees were vaccinated, Arwady said, though she said the health department has used a figure of 88%, calling that a "conservative estimate."

"And as of yesterday we had no hospitalizations or deaths reported," she said, though officials are continuing to check.

Prior to the festival's start, event organizers announced they would require proof of full vaccination or a negative Covid-19 test result from the last 72 hours to enter. And the Chicago Department of Public Health had a list of states and territories added to the city's travel advisory, recommending that unvaccinated people coming from those states obtain a negative test 72 hours prior to their arrival in Chicago or quarantine for 10 days upon their arrival.

Arwady said she anticipated about 200 cases before the start of the festival, adding, "Clearly, with hundreds of thousands of people attending Lollapalooza, we would expect to see some cases."

Of those who tested positive, 71% were not Chicago residents, she said, and 79% were under the age of 30. Arwady said 17% also reported their presence in other high risk locations where they could have been potentially exposed, like visiting bars and traveling from out of state.

Any person diagnosed with Covid-19 during or after attending Lollapalooza is included in this analysis, Arwady noted, so the transmissions may or may not have been from the festival itself.

Additionally, health officials conducted a survey of attendees, which found younger attendees were more likely to say that attending the festival was "an incentive for them to be vaccinated," Arwady said. The survey also asked if whether the requirement that attendees show proof of vaccination or a negative test made attendees feel safer: 76% said yes, 11% said no and 13% said it didn't matter, Arwady told reporters.

Officials are glad to see other music festivals following suit, she added, pointing to Milwaukee's Summerfest and Bonnaroo in Tennessee, which have announced they will require proof of vaccination or a negative test within the last 72 hours.

"(We) felt strongly that if we were pulling folks together, this needed to be part of the event," Arwady said of the requirements. "I think having some additional data, knowing that it is driving vaccination rates for younger people, and that generally it does make people feel -- at least some people -- more likely to attend, I think is helping to drive what I think is a best practice in this space."

Chicago Mayor Lori Lightfoot responded to the news on Twitter, writing, "In Chicago, we can be open AND be careful," though the acknowledged officials are still tracking cases connected to the festival.

"Hat tip to all of our Lolla and city partners for prioritizing COVID safety," Lightfoot said.