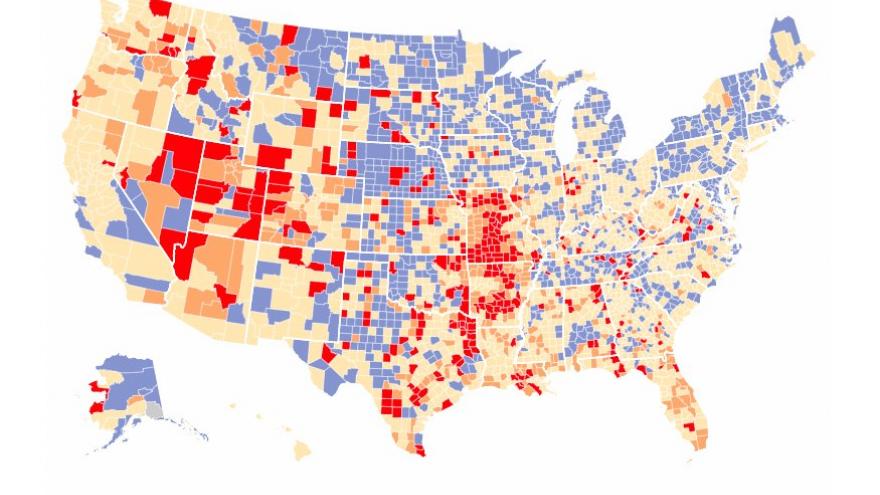 (CNN) -- Local officials are sounding the alarm over an increase in Covid-19 infections just as the nation prepares to celebrate a Fourth of July holiday that many hoped would mark the start of the resumption of normal life.

In Arkansas, which has one of the lowest vaccination rates in the nation, cases are surging, officials said. In Los Angeles County, where the vaccination rate is slightly above the national average, officials warned about a possible new wave of infections, especially given the rapid spread of the Delta variant.

"We are now going in the wrong direction yet again with Covid-19 infections here in the state of Arkansas," said Dr. Cam Patterson, chancellor at the University of Arkansas for Medical Sciences, during the state's weekly briefing Tuesday.

"With July 4th holiday coming up and eventually kids going back to school, we have to be concerned that this would be a trend that could continue. And if it does, it would appear that we may be in the beginning of the third surge of Covid-19 here in the state of Arkansas," he said.

More than 90% of active virus cases are people who have not been vaccinated, Gov. Asa Hutchinson said during the briefing.

"The vaccine, as well as continued practicing of social distancing and masking when that is necessary, are our pathways out of a third surge of Covid-19," Patterson said.

"Looking state by state and county by county, it is clear that communities where people remain unvaccinated are communities that remain vulnerable," Dr. Rochelle Walensky, head of the US Centers for Disease Control and Prevention, said Thursday. "This is all true as we monitor the continued spread of the hyper-transmissible Delta variant."

The threat of another wave can be triggered by the 4 million people who have yet to get vaccinated, she warned.

"We have enough risk and enough unvaccinated people for Delta to pose a threat to our recovery and masking up now, could help prevent a resurgence in transmission," Ferrer said, pushing back against criticism about guidance to resume mask-wearing indoors.

The county is one of the first areas in the US to revisit its mask recommendation after California lifted most of its Covid-19 restrictions last month. The new, voluntary mask guidance is needed until health officials can "better understand how and to who the Delta variant is spreading," the county's department of public health said.

Delta variant will make it harder to reach herd immunity

Two-thirds of adults in the US have received at least one dose of the vaccine as of Thursday, CDC data shows. Over the past week, an average of 661,795 people became fully vaccinated daily.

But even as vaccinations continue, the Delta variant could make it harder for the US to reach herd immunity, Assistant Health and Human Services Secretary Dr. Rachel Levine told CNN Friday.

"We don't exactly know what the herd immunity percentage would be for Covid-19. It would be different for the Delta variant, and higher, because it is more transmissible," Levine told CNN's Ana Cabrera.

The Delta variant, first seen in India, has now spread to all 50 states, and has accounted for more than 26% of cases as of June 19, according to the CDC's calculations.

People who are vaccinated are protected against the variant, Levine added, underscoring the fact that vaccinated individuals are "extremely unlikely to get sick" and that it would be "virtually impossible for them to require hospitalizations."

"For people who are unvaccinated, the Delta variant poses a threat," she said. "So in areas that have low vaccination rates, those communities and counties and states are vulnerable."

4th of July celebrations are OK. But first: Be careful and get vaccinated

Dr. Anthony Fauci offered a glimmer of good news ahead of the holiday: Americans can celebrate with the proper precautions, he said.

"That is, if you were vaccinated, you have a high degree of protection. If you are not, you should wear a mask, and you should think very seriously about getting vaccinated," said Fauci, who heads the National Institute of Allergy and Infectious Diseases.

"It's an appropriate time to step back and celebrate the progress we've made," Zients said during a briefing.

The holiday means that more people will be on the move.

In Chicago, Friday is expected to be the busiest day of travel at O'Hare and Midway International Airports since the beginning of the pandemic, according to the city's Department of Aviation. More than 220,000 passengers are expected to pass through O'Hare and 41,000 passengers at Midway on Friday, the department said in a statement.

Georgia's Hartsfield-Jackson Atlanta International Airport is also expected to see its busiest travel surges since the pandemic began, an airport spokesperson told CNN. During the period from Wednesday through Monday, the airport expects over 1.7 million passengers.

Johnson & Johnson said its one-shot coronavirus vaccine provides immunity that lasts at least eight months, and it appears to provide protection against the Delta variant.

"Current data for the eight months studied so far show that the single-shot Johnson & Johnson COVID-19 vaccine generates a strong neutralizing antibody response that does not wane; rather, we observe an improvement over time," Dr. Mathai Mammen, head of research and development at J&J's Janssen vaccine arm, said in a statement.

The company said one dose elicits both a lasting antibody response and generates immune cells called T-cells that can last for that time period.

Further, the company said additional data from its study of the Covid-19 vaccine will be made available in the coming months.

And for those who received a J&J shot, Fauci said clinical data currently do not show a need to administer booster doses.

Fauci added that the decision to boost may depend on local conditions and could be determined on a local level.

"But you should only be making a formal recommendation based on clinical data," Fauci said.