Liz Cheney, No. 3 House Republican, to vote to impeach Trump 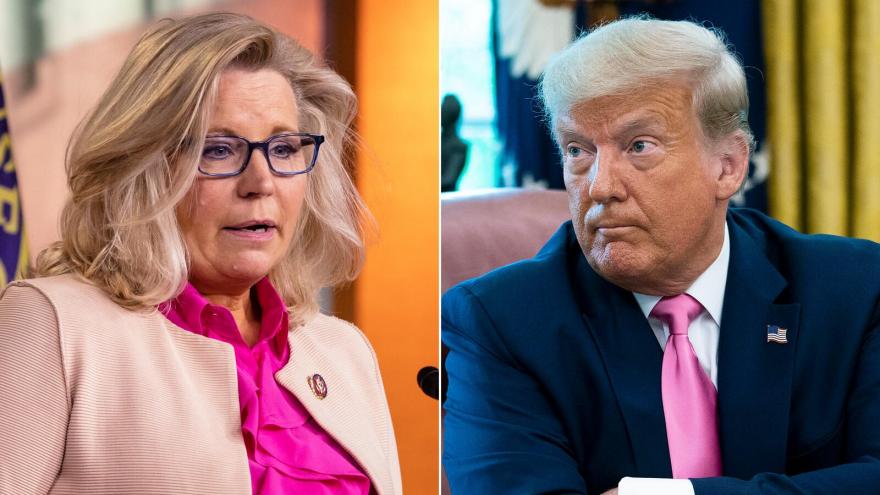 (CNN) -- Wyoming Republican Rep. Liz Cheney, the party's third-ranking House leader, announced on Tuesday that she will vote to impeach President Donald Trump, becoming the highest-ranking official from her party to support charging and removing him from office following the Trump-incited riot at the Capitol last week.

In a statement, Cheney, a staunch conservative, said Trump was responsible for the death and destruction that day.

"The President of the United States summoned this mob, assembled the mob, and lit the flame of this attack. Everything that followed was his doing. None of this would have happened without the President," said Cheney. "The President could have immediately and forcefully intervened to stop the violence. He did not."

"There has never been a greater betrayal by a President of the United States of his office and his oath to the Constitution," she added. "I will vote to impeach the President."

The House plans to vote on one article of impeachment Wednesday charging Trump with "incitement of insurrection," as it races toward making him the first President in history to be impeached twice. Cheney has said that the vote should be driven by one's conscience.

Unlike the other two top leaders in her conference -- House Republican Leader Kevin McCarthy and House Republican Whip Steve Scalise -- Cheney opposed Trump's efforts to overturn the election, and voted to certify the results last week.

The Republican Party has been torn by Trump's reluctance to concede the election and take responsibility for his role in inciting the attack on the Capitol.

Arizona Republican Rep. Andy Biggs, the chair of the fiercely pro-Trump Freedom Caucus, said Cheney should resign from her leadership position as conference chair for coming out in support of impeaching Trump.

But other Republicans looking toward the future of the party after Trump are infuriated by McCarthy's decision to go along with the President's deluded and dangerous effort to stay in power. Both McCarthy and Scalise oppose impeaching Trump, saying it would further divide the country.

McCarthy's staff asked for a call Tuesday with McCarthy to ask him to explain his actions, "and he couldn't be bothered to join the call," according to a person close to the matter. Senior advisers to McCarthy, who are paying careful attention to his potential 2022 run for Speaker if the GOP wins back the House, released details of a recent call with House Republicans in which he insisted that Trump supporters, rather than Antifa, stormed the Capitol.

But that has done little to quell their concern that McCarthy has been tarnished by his defense of the President. On the eve of the impeachment vote, senior advisers are trying to keep some staff from quitting.

A McCarthy spokesman responded, "This is completely inaccurate." The spokesman said that that McCarthy's office held a staff call while the House GOP leader "was on the road" and he "was never intended" to participate on the call.

"It's been a tough week but today's call reaffirmed the bonds and commitment we have to our important work," said the spokesman.

The House GOP leader ignored questions Tuesday evening on whether Trump was responsible for the riot, walking into the chamber in silence.

Senate Majority Leader Mitch McConnell has indicated that he believes impeaching Trump will make it easier to get rid of the President and Trumpism from the Republican Party, according to a source with knowledge of the matter. McConnell has made no commitments on whether he will vote to convict Trump during a Senate impeachment trial.

Cheney, the daughter of former Vice President Dick Cheney, has broken with Trump in the past, including on various foreign policy issues and by supporting Dr. Anthony Fauci, the nation's leading infectious disease expert, during the coronavirus pandemic.

When asked about Cheney's decision to impeach the President, House Speaker Nancy Pelosi responded, "Good for her to be honoring the oath of office."