Living on a 🙏: What our emoji usage says about life in isolation 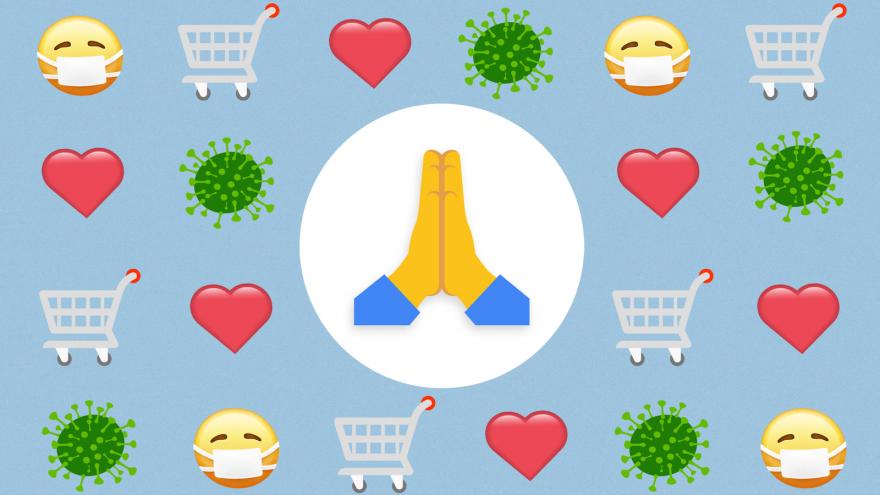 (CNN) -- At a time when in-person conversations are harder to come by, many people are choosing to express their thoughts about ? with a practical mix of ? and ?. But perhaps no emoji has come to embody the hopes and fears of this unthinkable moment as much as ?.

The folded hands emoji has popped up in more tweets than ever before to help express our feelings about seemingly every aspect of a health crisis that can sometimes defy words. It's used to give thanks to frontline workers, send prayers to loved ones and express gratitude for finding toilet paper on supermarket shelves.

The emoji, sometimes called prayer hands, was used 25% more often in April than in August, the last time that particular character was analyzed by Emojipedia, which tracks trends and frequency of emoji use on Twitter. That spike made it the eighth most popular emoji for the month -- and cemented its position as a visual emblem for how we feel during the pandemic.

As coronavirus cases ticked up and and lockdowns spread around the world, the way we communicate evolved quickly. Water-cooler conversations were replaced by Slack chats. Happy hours and birthday parties now unfold on Zoom. Phone calls made a comeback. And people are increasingly relying on emoji to express their thoughts and gestures to an audience they can no longer see in person.

"The way emoji is being used to describe the pandemic is basically body language for the digital age," Vyvan Evans, author of "The Emoji Code: The Linguistics Behind Smiley Faces and Scaredy Cats," told CNN Business. "We use language to convey ideas, but part of the meaning is missing and the words are nuanced like tone of voice and expressions."

Nearly one in five tweets now include an emoji, up from about one in six tweets during same time last year, according to Emojipedia. Icons such as the face with a medical mask, the microbe and a bar of soap have also spiked in messages specifically associated with the coronavirus. Usage of the ✈️ emoji and ⚾ are down, as people stay inside their homes more.

On other platforms, there has been an even greater spike. Google told CNN Business that emoji usage on its Gboard keyboard app for Android increased by more than 60% between January and March. (Apple did not respond to a request for comment about recent emoji usage on iOS.)

Yet, some things haven't changed. Emojipedia found the most popular emoji remains the tears of joy face, which was named as word of the year in 2015 by the Oxford Dictionary. Although the company can't track private communications, such as in text messages or chat apps like WhatsApp, Emojipedia chief emoji officer (yes, that's a real position) Jeremy Burge said the correlation is typically quite similar.

The shifting popularity of various emoji highlights what preoccupies us during the Covid-19 pandemic: less focus on traveling to exotic destinations than visiting the local grocery store, a preoccupation with all things medical and, perhaps, a capacity for crying tears of joy during a time of such loss. At the same time, our usage may highlight the lack of pandemic-specific emoji currently available to users.

Last month, the Unicode Consortium -- the non-profit that oversees emoji standards and is responsible for new releases -- announced it is pushing back the release of next year's emoji lineup due to the pandemic, potentially limiting a new crop of emoji that could help people represent the realities of living during a health crisis. (A collection of emoji is still on track to be released in the second quarter of this year, including a people hugging emoji that shows two characters embracing -- a decision made before social distancing became a way of life.)

At least one company, Facebook, has opted to release its own unofficial emoji to meet the moment. A Facebook spokesperson called its new "care emoji," with a smiling face holding a heart, "a way for people to share their support with one another during this unprecedented time."

In the absence of more new coronavirus emoji, some have gotten creative with how they've been sharing existing emoji during the pandemic. In Spain, for example, the pairing of the microbe emoji with the crown emoji -- "crown" translates to "la corona" in the Spanish language -- has gained traction; some people even named Spotify playlists and YouTube videos after the combination.

Others are turning to options like the folded hands emoji, which first appeared on smartphones in the US in 2012. Long before the pandemic, it had been used to represent many things, from a high five and a Namaste icon to a token of gratitude or prayer. Kim Kardashian used it in a tweet after landing on the cover of Vogue in 2014, and the NBA's Phoenix Suns account celebrated "National High Five Day" last year with its help.

An early version of the folded hands emoji on Apple's iOS platform featured a light emanating from the fingers, which could imply either two hands clapping in celebration or a halo-like symbol of prayer. On Android, it once featured a character in a pose commonly associated with Western Christian prayer.

Angela Guzman, a former Apple intern who was one of the early emoji designers for iOS, said the best approach to emoji design is to create visual symbols with versatility to evolve with people and the times they live in.

"A word that we used five years ago may mean something else today -- the same is true of emojis," said Guzman, who now runs digital coaching startup Tijiko. "For this reason, when designing an emoji, current trends can play a role in its creation. But she added it's important "not to add too many embellishments that will not last with the test of time."

The Unicode Consortium did not respond to a request for comment on whether it could add Covid-19-specific emoji to a future lineup. But Burge of Emojipedia said it'd be an unlikely move, echoing Guzman's point.

"Unicode looks for emoji to show long-lasting impact," he said. "Guidelines suggest that temporary trends or fads are to be overlooked; any new emoji that can show a sustained interest for a long period of time is more likely to be approved."

Either way, we'll almost certainly be relying on emoji like ? to describe how we feel for the duration of the pandemic.