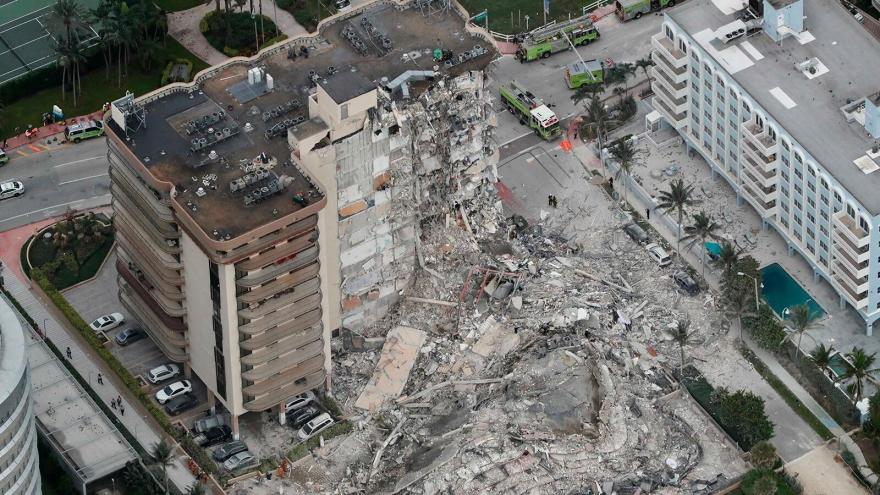 (CNN) -- Out walking his dog after midnight, Nicholas Balboa felt the ground shake.

Plumes of dust and debris soon billowed all around as a massive section of a condo complex in Surfside, Florida, crashed to the ground Thursday.

No one could have survived, Balboa recalled thinking.

As people gathered at the front of the building, he and another man walked along the beach to the back.

"It was eerie, like quiet, still," he told CNN. "It was almost out of a horror movie."

Balboa and the man followed the sound. Then, Balboa spotted something: fingers, little ones, wriggling from beneath the mountain of chunked concrete and twisted metal.

"Finally, I got close enough to hear him, and he said, 'Can you see my hand?'" Balboa said. "He was sticking his hand up .... through the debris. And I could see his hand and his fingers wiggling."

Balboa flashed the light on his phone to signal for help, and a police officer came over, he said. More rescuers eventually arrived.

The boy, who was under a mattress and bed frame, was pulled out, he said -- one of at least 37 people rescued by late Thursday; at least one person had been confirmed dead; 99 people were unaccounted for.

"He was obviously sleeping," Balbao said. "I can only imagine how many people were in their apartments either sleeping or watching TV or just whatever, just living their lives. Unbeknownst to them the building was about to break away."

A scene of hope from the predawn destruction also was captured on video, though it wasn't immediately clear if it was the same boy's rescue.

As firefighters in yellow or red hard hats climbed around the vast litter field, a rescuer reached an arm under what looked like a collapsed wall, its reinforced metal bars spiking skyward, footage captured by ReliableNewsMedia shows.

Guided by comrades' flashlights, the helper grabbed onto and guided a person in a dark shirt and pajama pants out into the night.

The survivor slowly leaned over, lying down over a rescuer's right shoulder and draping their legs over that bigger person's chest, the ReliableNewsMedia video shows. Then, the survivor rolled down onto a white stretcher and helped the rescue team secure orange straps.

The team carried the person away as an alarm sounded a flat horn in bursts of three.