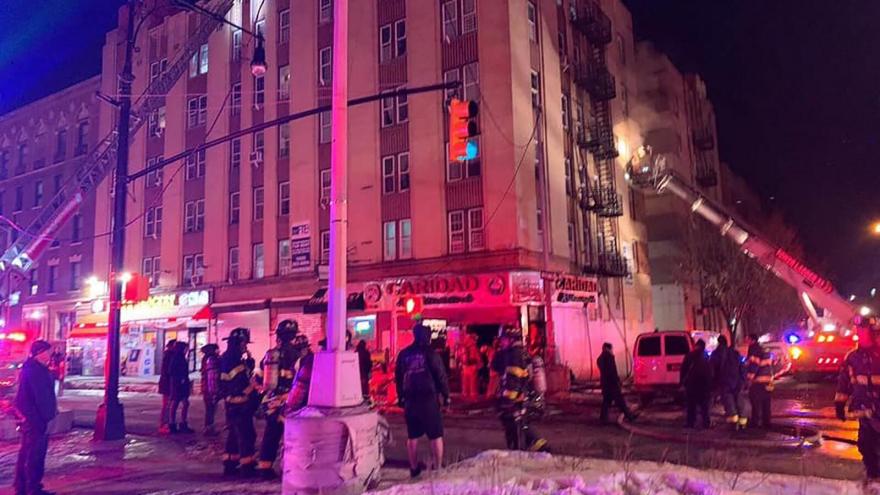 A four-alarm fire broke out at an apartment building in the Bronx early Saturday morning when the lithium-ion battery of an electric bike or scooter combusted on its own, according to the FDNY.

(CNN) -- A lithium-ion battery in an electric bike or scooter self-combusted in a Bronx apartment building, sparking a four-alarm fire early Saturday morning, according to the Fire Department of New York (FDNY).

The FDNY were alerted to flames at 2230 Grand Concourse just after 2 a.m. and the fire was extinguished about three hours later, with one firefighter sustaining minor injuries, an FDNY spokesperson told CNN Saturday.

New York City Fire Marshals determined the initial flames were caused by a lithium-ion battery that burst into flames in a restaurant on the ground floor of the building, according to the FDNY.

The fire then spread vertically through voids in the building and went up through the structure's internal framework spreading to apartments on the top floor where the blaze caused fire, smoke and water damage, the spokesperson explained.

"[It's] unclear on the make and model of the device, but they had several devices in there," the spokesperson said of the two-wheeler that caused the conflagration. "The important part is that it was the lithium-ion battery that caused it while charging an electronic device."

More than 100 fires were caused by e-bikes in 2021, resulting in 79 injuries and four deaths, according to the FDNY.

In response to the rising number of fires caused by e-bikes -- which the FDNY asserts is a cause it had never seen until 2021-- the FDNY has created safety videos and podcasts instructing the public on proper lithium-ion battery handling and has shared safe-practice guidelines for charging rechargeable batteries used in e-bikes.

The FDNY said the fire in the Bronx is still under investigation.