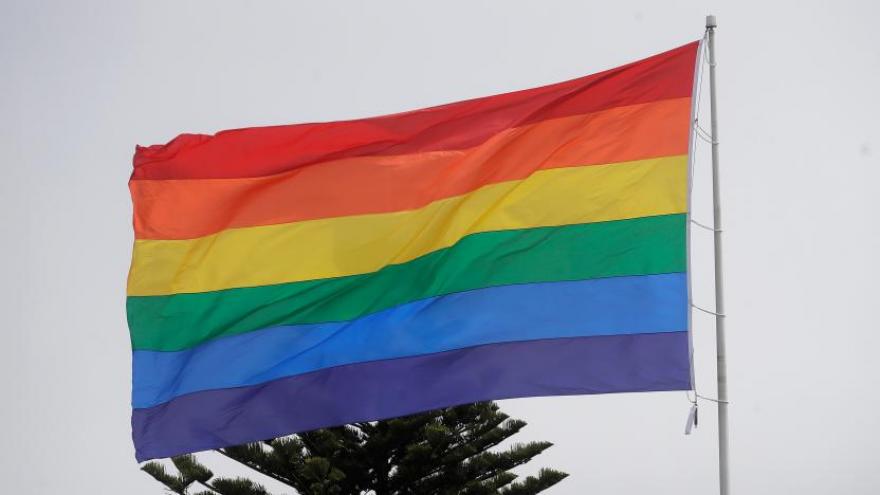 A rainbow flag flies over the Castro District in San Francisco in 2020.

(CNN) -- Fifty-five years ago this month, a group of transgender women in the Tenderloin neighborhood of San Francisco fought back against police as they arrested patrons at Compton's Cafeteria, a go-to hangout for temporarily avoiding the harshest harassment, discrimination and physical violence they faced on the streets. While the ultimate reason for their arrests is unknown, police frequently arrested those who dressed in clothing "opposite" to their sex, which was a crime at the time.

This historic act of transgender resistance to the police, which happened three years before the Stonewall riots in 1969, was almost lost to history until Susan Stryker, an academic focused on LGBTQ issues, found a mention of the event in historical archives related to New York City's 1972 Pride March memorializing Stonewall.

"The police tried to arrest one of the queens and they threw coffee in the cop's face," Stryker, who is currently the Barbara Lee distinguished chair in Women's Leadership at Mills College, told CNN. In that era, trans feminine women who dressed in what was considered women's clothing were called drag queens or queens, she said.

"People were throwing plates, cutlery and sugar shakers at the cops, and they smashed out the windows at the cafeteria," she continued.

Although the event, which was later named the Compton Cafeteria riots, is not as widely known as Stonewall, Stryker characterized it as "a precursor to a bigger earthquake."

"There were probably a couple hundreds of people fighting and it's remembered as one of the early significant trans/queer resistance movements," she said.

Fifty-five years later, parts of the LGBTQ community are reckoning with the fact that these histories like the Compton Cafeteria riot were previously overlooked, while debating ways to better reflect inclusivity. Lately, this has resulted in more conversations throughout the country about which version of the Pride flag the LGBTQ community should use.

In late June, the Castro Lesbian, Gay, Bisexual, Transgender, and Queer Cultural District (CQCD) in San Francisco voted to recommend to the Castro Merchants, the business association that has jurisdiction over the flagpoles, that it replace the original Pride flag in Harvey Milk Plaza with a new version of the flag that's more inclusive of Black, brown, and transgender members of the LGBTQ community.

The CQCD Advisory Board voted 7 to 2 to recommend the change of the commonly recognized rainbow flag, also known as the Gilbert Baker design with the Progress Pride Flag. This new version includes black, brown, light blue, white and pink stripes, in addition to the original colors of the Pride flag, to recognize and include Black, brown and transgender members of the LGBTQ community.

After the June vote, the CQCD announced in late July that it would conduct a community survey via its social media platforms as well as via a print survey in which community members could share their thoughts on the current flag. The group said on its Facebook page that responses to the survey would be gathered and presented at a larger community forum in September.

The Castro Merchants will ultimately make the decision on whether a change should be made. There is no deadline set by CQCD or the Merchants for when the matter should be resolved.

While the Castro District is unique in that it is a well-recognized neighborhood and cultural district, LGBTQ communities in other parts of the country are also reconsidering what flags they use.

In 2017, Philadelphia unveiled a new version of its Pride flag, which features the black and brown stripes in addition to the traditional rainbow.

The LGBT Community Center in New York City currently displays a hybrid version of the Gilbert Baker flag outside its office. In addition to rainbow colors, it includes black and brown stripes, as well as the organization's name.

A spokesperson for the center said in a statement that it does fly a few different flags that get swapped out on the building "to express solidarity, expand inclusivity, and communicate acceptance" depending on the occasion. The organization is also considering if it should make modifications to its current flag or add more outside, but said that displaying a flag is "just one of the ways we can visibly acknowledge and celebrate the colorful plurality of our community."

The debate over a new flag

The debate over an updated flag comes as the LGBTQ community grapples with its treatment of Black, brown and transgender individuals, who historians and advocates say have heavily contributed to the movement but whose work is often overlooked or erased from LGBTQ history.

Eric Stanley, an associate professor in the Department of Gender and Women's Studies at the University of California, Berkeley, told CNN that these overlooked groups have played a crucial role in the fight for LGBTQ civil rights.

"As is well documented, Black, brown and Indigenous people have been central in every part of trans/queer liberation movements," Stanley said, while also referencing the Compton's Cafeteria riot as an example.

"[I]t was mostly low-income street queens, again many of them Black and brown, who fought the cops in the streets outside the Stonewall Inn three years later," they continued, adding that most White lesbian and gay activists at the time condemned any type of fighting back against police in favor of a more "respectable" image. But many of these transgender women knew that no matter how respectable they were, police would still be violent against them, Stanley said.

Joss Greene, an early career fellow in sociology at Columbia University focusing on transgender history, expanded on the idea that the fight for equality erased those who didn't fit into the ideas of what it meant to be a respectable LGBTQ person, either literally or structurally.

"Some argue that the mainstream gay movement since the 1970s has become more politically reformist and assimilationist," Greene said. "Rather than challenging norms and laws around gender and sexuality, the gay movement has argued that gay people are 'just like everyone else' and should have the same rights. The problem with creating this kind of hierarchy of respectability is that it empowers the most privileged gay and lesbian people at the expense of members of the queer community who are still seen as 'deviant,' like trans people."

"Recognizing the organizing legacy of trans women of color is important, not only as an act of honoring people's contributions, but because it provides us with models and lessons for activism today," he continued.

Those opposed to the flag change in San Francisco argue that removing the original Pride flag is a form of erasure and disregards the wishes of Gilbert Baker.

"While I previously believed the flag that flies at Harvey Milk Plaza to be a functional municipal standard bearing stanchion, based on the extensive research of my esteemed colleague, U. Sacred Mitchell, I have nuanced my position on the flag at that location in light of its intention and historicity," CQCD board member Stephen Torres said in a statement submitted for the meeting notes. "I now feel that this product of the work and activism of Gilbert Baker should be able to fly in perpetuity in accordance with the late artist's dying wishes."

The Castro Merchants suggested to the advisory board that a second flagpole be installed, saying in a statement that "we believe the creation of an alternative space would best reflect our two sincere beliefs: symbols can change over time yet queer history matters."

The issue will be discussed further by the advisory board with more community input in September.

A number of Black, brown, and transgender members of the LGBTQ community as well as organizations nationally are in support of making a general shift to the Progress Pride Flag, saying that they believe it to be key to liberation for the community.

"Queer liberation includes all of us which means we have to honor Black, brown, and trans identities in all queer liberation works," Rhode Island state Sen. Tiara Mack told CNN, adding that it would be valuable to add intersex representation as well.

Representatives for the Transgender District in San Francisco, a legally recognized area by the city that includes the site where the Compton's Cafeteria riot took place, said the last two years of protests against racism and inequality indicate symbols change meaning over time.

"As a result, the intentions of the flag created by Baker are no longer valid -- what is in fact valid, is the impact that the interpretation of the flag has on groups of people who faced abandonment from the broader LGBT community and continued to remain entrenched in disenfranchisement," the organization said in a statement.

"The adoption of this flag shows recognition and pays homage to the true roots of our LGBTQIA+ Rights Movement," the Black and Latino LGBTQ Coalition similarly stated. "It is a reminder that we are stronger together and a celebration of our diversity."

One small step for LGBTQ rights

While many support the Progress Pride Flag, some in the LGBTQ community believe that using it more widely will be just one small step in fighting for queer liberation.

"If we are going to get free we need a radically different vision for trans liberation and ways of organizing that do not mimic corporate culture with just a rainbow makeover," Stanley told CNN.

"I don't actually care about the flag, I'm more interested in land back, free housing and health care for trans people, the abolition of prisons/ICE, and reparations than a flag, even if it has a multicultural makeover."

Meanwhile, Stryker said she appreciates "the gesture of inclusion and the shift" represented by the new flag.

"The older version of the rainbow flag is a symbol of a diverse community of sexually and gender diverse people," she said. "If there's a feeling of exclusion and there's a gesture that signals the inclusion of people that feel marginalized that's a good thing."

"Will changing the colors of the flag change the quality of life for people who are experiencing oppression?" she continued. "If the goal is justice, the number of colors on a flag will not necessarily equate to justice."