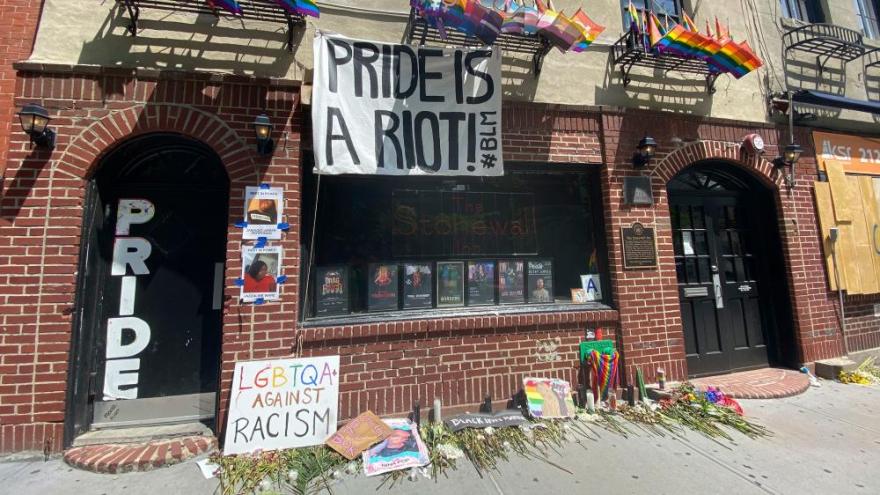 Historic Stonewall Inn Celebrates Pride and Honors Black Lives Matter in New York City on June 6, 2020. As Americans take to the streets to protest against racism, police brutality and the marginalization of minorities in the aftermath of George Floyd's death, the LGBTQ community is focusing its Pride Month programming on elevating black voices.

(CNN) -- As Americans take to the streets to protest against racism, police brutality and the marginalization of minorities in the aftermath of George Floyd's death, the LGBTQ community is focusing its Pride Month programming on elevating black voices.

Some groups are holding protest marches in solidarity with the Black Lives Matter cause.

"LGBTQIA communities in predominantly white cities are very fragmented and there is a lot of racism that takes place -- intentional or not, it's felt. So to have a march like this take place in Austin, is historic in my eyes," Sheldon Darnell, co-founder and president of Austin Black Pride and a co-organizer of the march, told CNN.

"The organizers and 1,500 marchers who participated in this demonstration are declaring their support for my black body," Darnell said.

"It's one thing to post on social media or show solidarity in private but to see all of the beings in real life, in real time was special."

Protesting police brutality and demands for equality were at the heart of the Stonewall riots, which propelled the LGBTQ rights movement in the US in 1969. Darnell emphasized the role of black trans activists like Marsha P. Johnson and Sylvia Rivera, who were at the forefront of that fight.

"It's important to take Pride back to its roots of standing up for injustices and inequalities," he said.

In Los Angeles, LA Pride previously canceled all in-person events because of the coronavirus pandemic, a precaution taken by many Pride festivals around the country this year. On Wednesday, the organizers announced they would hold a march in solidarity with Black Lives Matter on June 14 in the Hollywood area.

The event has since drawn criticism by local black LGBTQ activists like Ashlee Marie Preston, previously a board member for LA Pride, who in a Facebook video specified there was no coordination between local Black Lives Matter chapter and LA Pride.

"Instead of making an attempt to co-opt the moment and cash in on a branding opportunity, they should have reached out to BLM to support actions that BLM is already organizing — or at least included more community black leadership," Preston told CNN.

"There's this notion that BLM and LGBTQ culture are worlds apart, but BLM was founded by black queer women. The LGBTQ community needs a crash course on intersectionality and the opportunity we have to build a cross-cultural coalition that satisfies our collective interests" she said.

RELATED: It's Pride Month. Here's what you need to know

Christopher Street West, the non-profit that organizes LA Pride, has drawn further criticism by the larger LGBTQ community in Los Angeles for reportedly requesting the LAPD's collaboration for the march.

"This isn't the first time black LGBTQ leaders and community members have asked CSW to be more intentional about keeping Pride safe by eliminating its heavy police and sheriff presence," Preston told CNN.

Yazmin Monet Watkins-Vieux, an organizer with Black Lives Matter Los Angeles, told CNN that the presence of police at the LA Pride has been a long-standing concern within the community, that their involvement makes Pride "an inherently unsafe space for black folks."

According to Watkins-Vieux, efforts to show support for Black Lives Matter need to not only take a stance against working with police departments, but also amplify two specific demands from the movement: defunding the police to reinvest in communities, and prosecuting cops who have killed black people.

"It's really critical for anyone saying they are organizing on behalf of black lives, and specifically saying Black Lives Matter," Watkins-Vieux told CNN.

"The community is demanding that if you are to show up in solidarity for us, it looks like including these demands," she added.

A statement posted on LA Pride's website on Sunday acknowledges "missteps in our rush to create the June 14th solidarity march," and apologizes for the initial lack of collaboration with black activists.

"In that haste, we overlooked the direct police involvement that permitting involves. We understand that clearly goes against the demands for systemic police reform," the statement reads.

LA Pride referred CNN to another statement published on Monday, announcing they will no longer be involved in organizing the June 14 event, which is now called the All Black Lives Matter march, but they are "in full support."

Police presence at Pride events is being reconsidered by organizers around the country.

Indy Pride in Indianapolis, which announced this week it will hold a June 20 virtual event "to uplift black and brown people," also specified in their statement that they will no longer contract with or utilize police departments for security, and if their presence will be necessary, "they will provide support to block traffic as mandated by the city, but will not participate in the event."

RELATED: How lavender became a symbol of LGBTQ resistance

"Indy Pride is meant to be a safe place where people celebrate LGBTQ+ uniqueness, history, and build community. For many in our community who have experienced police brutality, the presence of uniformed officers and police at Pride do not create this safe environment," the statement reads.

Organizing a safe and inclusive march

On Thursday, the Reclaim Pride Coalition announced it will host an in-person march to support the movement for black lives and to protest police brutality. Named the "Queer Liberation March for Black Lives and Against Police Brutality," the march will take place in Manhattan on June 28, on the anniversary of the Stonewall riots.

To protect participants from the risk of catching coronavirus, organizers plan to offer masks, gloves and hand sanitizers to participants. Trained community members will help enforce social distancing guidelines, according to Barjon, and the event will be livestreamed for those who wouldn't feel safe being physically present.

In terms of coordinating with local Black Lives Matter activists, Barjon says her group is busy doing that outreach work.

"We are aware of what's happening with LA Pride. Your intention might be to do something good, but we have to make sure the impact is what we want it to be, and that the right voices are getting uplifted," Barjon told CNN.

Barjon told CNN that centering black and brown voices during Pride has always been a priority for the Reclaim Pride Coalition, and while this moment is bringing this issue to the fore for many more, "it always should have been at the forefront for everyone."

Barjon is both encouraged and cautious about the momentum generated by the protests across the country.

"Part of me feels like (people) are arriving at the place we've been trying to get them to for years," she said.

Talking to older mentors about their experiences though, Barjon, 24, said "it's hard to hope that this will be the time that it sustains."

"We need more than 'Black Lives Matter.' We need 'Black Futures Matter,' we need 'Black Education Matters,' we need all of it. That's one thing I hope people take away from everything that's happening right now," Barjon said.

"The way that we keep that momentum going is that we really have to just embed it into our lives," she said.