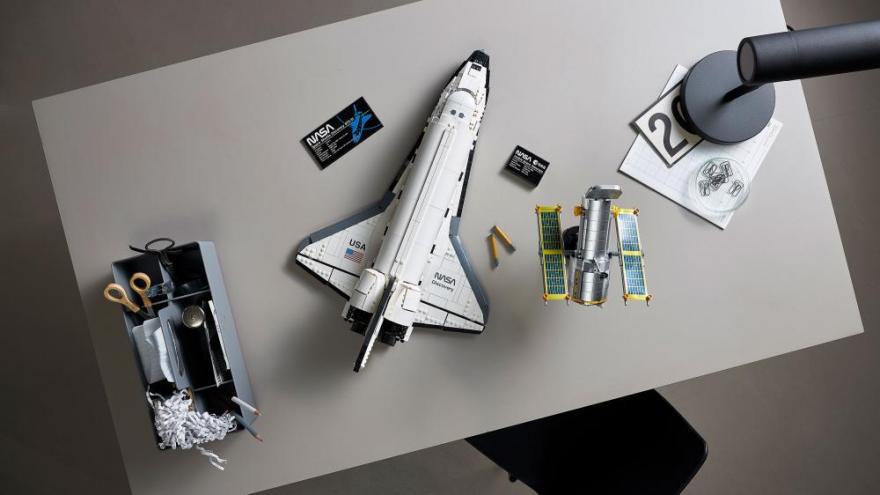 The model of the Discovery and the Hubble has more than 2,300 pieces.

(CNN) -- Lego is launching a new set that is out of this world: the space shuttle Discovery and the Hubble Space Telescope.

The set, which will be released on April 1, was created in partnership with NASA to mark the 40th anniversary since the first space shuttle flight on April 12, 1981, that started a new era in space exploration.

The shuttle model costs $199 and has more than 2,300 pieces. Aimed at adults, the model features realistic details like an opening payload bay, retractable landing gear, opening cockpit, space arm, and five seats for the crew. It measures more than 8.5 inches high, 21 inches long and 13.5 inches wide to make it easy to display, according to a news release from Lego.

To announce the launch, Lego enlisted the help of astronaut Kathy Sullivan, a member of the crew of NASA's STS-31 mission, which launched the Hubble Telescope on April 25, 1990.

Lego filmed an exclusive interview with Sullivan as she explained her experience in space along with showing a completed Lego model.

"I was thrilled to see the space shuttle in Lego form ... Hubble is definitely the highlight of my career," Sullivan said in the news release.

"This Lego model is a great way for Lego builders and space fans alike to get excited about space travel and learn more about the famous mission in a fun and engaging way."

Sullivan flew on three space shuttle missions and was the first American woman to complete a spacewalk as part of STS 41-G with the space shuttle Challenger on October 11, 1984.

The space shuttle was the first reusable spacecraft. The orbiter would launch like a rocket and land like a plane. The two solid rocket boosters that helped push them into space were also reusable after being recovered in the ocean. Only the massive external fuel tank would burn up as it fell back to Earth. The combined system was known as the Space Transportation System.

Five shuttles flew into space during the program's history: Atlantis, Challenger, Columbia, Discovery and Endeavour. Challenger and Columbia were destroyed in accidents.

The Challenger exploded minutes after launch on January 28, 1986, due to faulty O-rings in the shuttle's rocket booster. All seven crew members died, including Christa McAuliffe, who would have been the first teacher in space.

The Columbia exploded over Texas during reentry on February 1, 2003, killing the seven crew members. An investigation determined the accident was caused by a piece of insulating foam that broke off and struck a hole in the leading edge of the left wing less than two minutes into the flight.