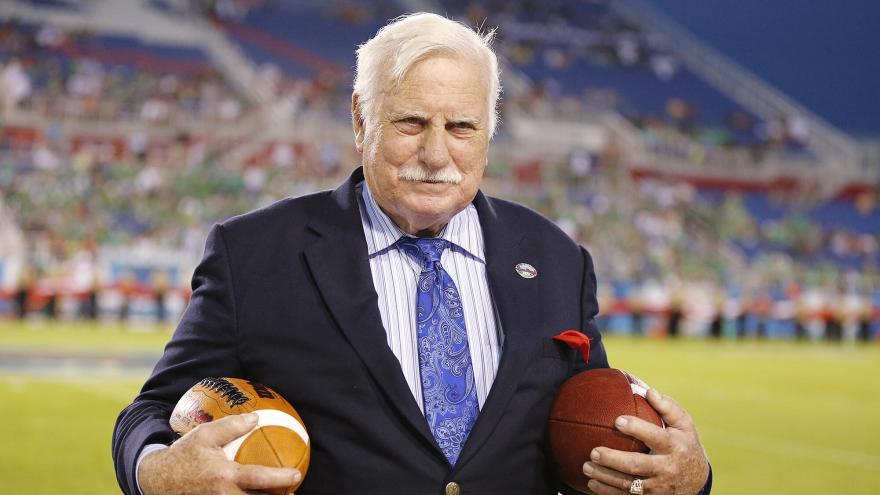 (CNN) -- Howard Schnellenberger, the legendary football coach who led the University of Miami Hurricanes to national prominence after winning the school's first national title, has died.

Schnellenberger passed away on Saturday at age 87, his family announced through Florida Atlantic University.

"Howard always allowed me to be a part of his football life," Beverlee Schnellenberger, who was married to the coach for 61 years, said in the release. "Watching him on the sidelines was an opportunity that gave us a special closeness -- win or lose -- that not many wives get. Even though he never smiled, he was always smiling in his heart. We loved all the moves and challenges."

"I will miss his warm heart, his warm hands and soft kisses. Howard always treated me special, like a queen, and was truly a husband that every Canadian girl dreams of," she added. "You will always be my love, now and forever. I'm proud to be your wife. You were a great leader of men and the leader of our lives."

"The loss of Coach Schnellenberger is immeasurable in so many ways for the University of Miami family," Blake James, director of athletics at the University of Miami, said in a statement. "He helped our University grow during a critical period of time and established a foundation for future success, on the football field and off. He will be remembered as so much more than a coach. Our thoughts are with his family, friends, former colleagues and players. He will forever be a Hurricane."

"Without him, there is no Miami Football. Howard Schnellenberger leaves behind a legacy more impactful than he'll ever know. Our thoughts are with his family and friends," the school's football program tweeted Saturday.

The University of Louisville football program wrote on Twitter Saturday, "The impact he had as a coach at Louisville & on the game of football is immeasurable."

Schnellenberger retired from coaching in 2011 with a career record of 158-151-3 and 6-0 in bowl games. He coached seven National Football Playoffs games. He also served as offensive coordinator under head coach Don Shula for the 1973 Super Bowl champion Miami Dolphins.