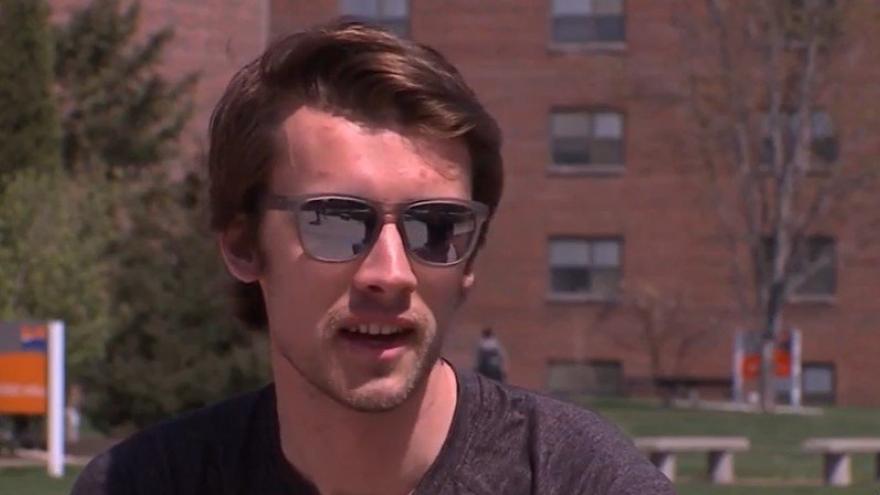 He graduates from Midland as one of the school’s most accomplished distance runners. He plans to attend graduate school and become a counselor.

“It’s therapeutic for me. It’s just relaxing,” said France, describing the 50 to 60 miles he logs running each week.

France holds the school record in the half marathon. And he earned All American status for his 8th place marathon finish in the NAIA National Championship last year.

These milestones are significant because France faces challenges most young men could never imagine. He started losing his vision in middle school. Legally blind, he sees a narrow field of grainy, blurry images and uses assistive technology to learn and study. France ran track and cross country in high school and graduated from Millard North.

“I can’t see the end of the sentence — or the word,” said Alex, which prevents him from traditional reading.

He’s used his faith, leaned on his friends, coaches, his sport and family to craft the life he’s always wanted. He hopes to run in the Paralympics in 2024 in Paris, France. He also has more marathons and races on his bucket list.

His attitude is to push forward, like he does in races.

“Sometimes in life, things happen. I wasn’t going to let it change my life. Instead of asking why me, I ask, ‘Why not me?’’ said France.

Since high school, France has practiced and raced with the help of guide runners, which poses some challenges. For starters, the guide runner has to be able to run as fast as France. The two are connected by holding onto a 2-foot piece of rope. France’s guide runner Tim Grundmayer has logged countless miles with his buddy along with his assistant coach, Phillip Duncan.

“He is so kind and confident and an inspiration to others,” said Duncan, describing France.

Duncan said he gives his friend verbal cues about what’s ahead on the course, navigating him away from pitfalls with a tug of the rope. It’s not without danger. France and his guide runners have tumbled in races.

“You don’t stop. You don’t think about what just happened. You keep on going,” said Duncan. He said France never makes excuses.

Alex said losing his vision because of a genetic disease, retinitis pigmentosa, helped shape him into the person he is today. He says pushing his limits helps him to encourage others.

“It’s been a privilege to be able to inspire people in that way,” he said.