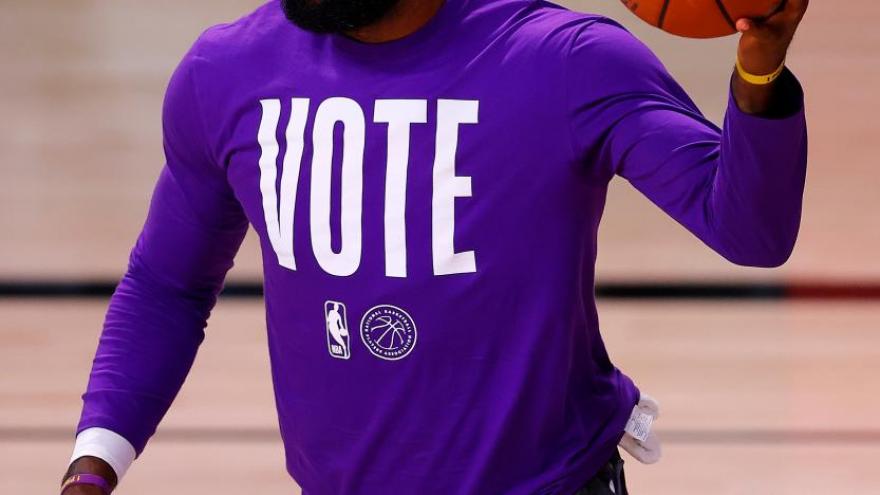 LeBron James is among the prominent athletes and artists that are part of the More Than a Vote organization.

The organization, made up of prominent athletes and artists, has focused its "We Got Next" poll worker recruitment effort -- a partnership with the NAACP Legal Defense Fund (LDF) -- in primarily Black electoral districts ahead of November's general elections.

"We marched. We demanded change. Now, we're ensuring our voices are heard. 10,000 new poll workers," the LDF posted on Twitter.

More Than a Vote and LDF did not immediately respond to a request for comment from CNN.

A number of first-time poll workers were among the virtual fans during Game 1 of the NBA Finals between the Los Angeles Lakers and Miami Heat on Wednesday night, according to a statement from the NBA.

Former President Barack Obama made a surprise appearance in the virtual crowd during the game, and used his appearance in the star-studded crowd, which included Kareem Abdul-Jabbar, Dwyane Wade, Shaquille O'Neal and "Good Morning America's" Robin Roberts, to thank poll workers participating in the upcoming elections.

In the video posted on social media the former President says, "I wanted to come on to give a shoutout to all the folks who are volunteering as poll workers in this upcoming election. It can be a thankless job, it's not one of those things you think about but it is absolutely vital for a democracy and I appreciate you."

Polling locations across the country are facing a potential worker shortage amid the pandemic. Officials in Georgia and Kentucky reported a shortage of poll workers during their recent primaries earlier this year.

The LDF said while they've "reached a milestone," there is more work to be done in its "We Got Next" poll worker recruitment effort.

The organization has called on young, healthy volunteers to work at polling stations so older, more vulnerable poll workers do not have to put themselves at risk.

More Than a Vote and LDF told the New York Times that the second phase of their push is focused on 11 cities, which include: Birmingham, Jackson, Houston, San Antonio, Montgomery, Charlotte, Cleveland, Detroit, Flint, Milwaukee and Philadelphia.