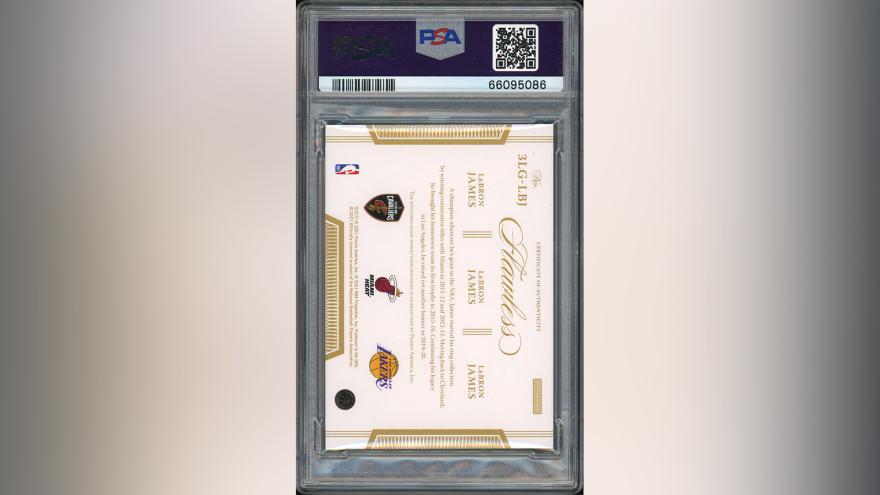 (CNN) -- A one-off LeBron James Triple Logoman trading card is going up for auction this week and could break a record for the most expensive sports card ever sold, according to Goldin Auctions.

"The card is a one-of-one, is completely unique and experts think it could challenge the all-time record paid for any trading card," Ken Goldin, executive chairman and founder of Goldin Auctions, told CNN.

The card features game-used patches from each of the NBA teams that James has played for: the Cleveland Cavaliers, Miami Heat and Los Angeles Lakers.

Bidding starts at $500,000 but Goldin said the card could break the record of $6.6 million, set last year with the sale of a Honus Wagner T206 baseball card.

There are about 50 Honus Wagner cards in existence, Goldin told CNN, but the LeBron James Triple Logoman card is the only one of its kind.

Panini, the company that issued James' card, created five Triple Logoman cards as part of its 2020-2021 "Flawless" collection. However, only one featured patches from a single player, James.

The card was discovered in May during a live event hosted on Whatnot, a livestreaming marketplace where people can buy, sell and trade collectibles.

The auction wouldn't be the first time one of James' cards sells for millions of dollars. In July 2020, a card from his 2003-04 rookie season with the Cavaliers fetched $1.8 million. A similar card sold in April 2021 for $5.2 million, according to PWCC Marketplace.

The Triple Logoman card was found after a yearlong hunt that captivated collectors. Even rapper Drake got into the search, purchasing 10 cases of cards in an unsuccessful attempt to find it, Goldin said.

"LeBron is one of the most recognizable athletes and celebrities on the planet," Goldin said. "Very few individuals in the history of sports or entertainment have equaled his career. His billionaire status is a testament to the incredible work he's done for years and could have a significant impact on the interest that we see for this card."