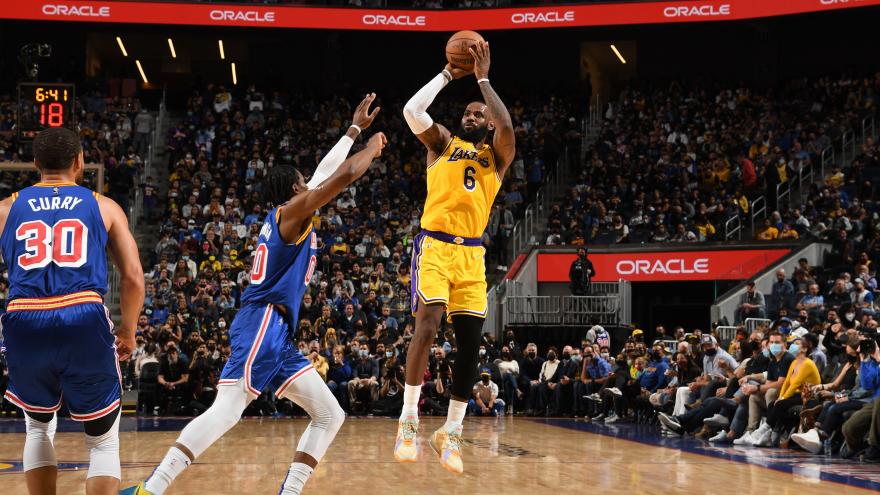 James, 37, needed 19 points entering the Lakers' road game against the Golden State Warriors to pass Abdul-Jabbar, who had 44,149 combined points -- 38,387 in the regular season and 5,762 in the playoffs -- in his illustrious career.

James netted his 44,150th career point when he hit a 3-pointer in the third quarter of the Lakers' 117-115 loss. The four-time NBA champion ended Saturday's game with 26 points, 15 rebounds and eight assists.

Abdul-Jabbar still leads for most career regular season points in league history, while James is third with 36,526 points, about 400 points behind Karl Malone. James, though, has scored the most playoff points in NBA history with 7,631, almost 2,000 points more than Abdul-Jabbar.

James, who now has 44,157 combined points, spoke about the milestone after the game.

"Throughout my career, anytime I've been linked with some of the greats, I've always just been in awe ... been appreciative of the opportunity to play this game at the highest level," James said.

"I love the game of basketball. I love being a part of the NBA and being able to, to inspire ... so many different sets of generations and along that way, when you're able to accomplish things individually then, at some point I guess have an opportunity to kind of sit back and think about it."

Over his lengthy career, now into its 19th season, James has played in more playoff games than any other player.