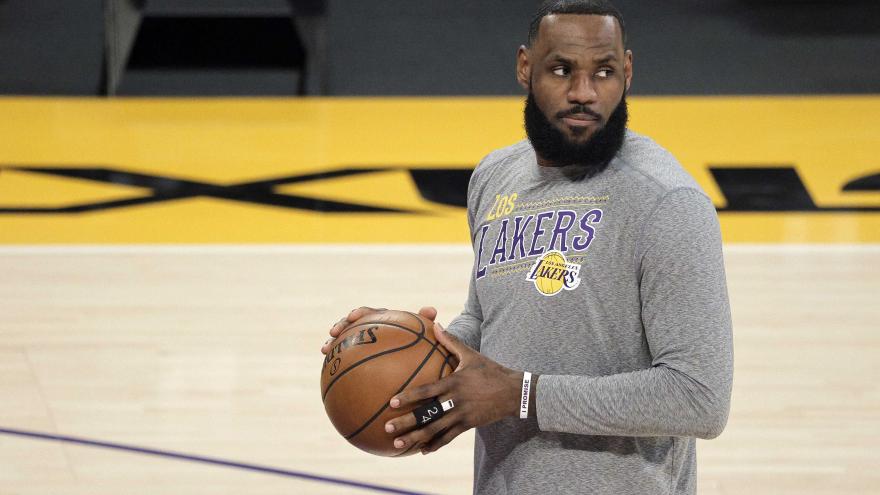 (CNN) -- LeBron James tweeted, then deleted, a post about the killing of 16-year-old Ma'Khia Bryant at the hands of Columbus police.

The Ohio teen was killed Tuesday, about 30 minutes before the verdict was delivered in the killing of George Floyd.

On Wednesday, James, an Ohio native, tweeted a photo of a Columbus police officer who was on the scene of Ma'Khia's shooting with the caption, "You're next. #accountability." CNN has not confirmed whether the officer pictured in the deleted tweet was the officer who fired shots at Ma'Khia.

The NBA titan later deleted the tweet, saying it was being used "to create more hate."

"This isn't about one officer," he tweeted Wednesday. "It's about the entire system and they always use our words to create more racism. I am so desperate for more ACCOUNTABILITY"

While he tweeted that "gathering all the facts and education" do more good than anger, he said his "anger is still here for what happened (to) that lil girl."

Police bodycam footage from Tuesday showed Ma'Khia holding a knife in her right hand and lunging at a girl, who fell to the ground. An officer opened fire when Ma'Khia appeared to attempt to lunge at a second person, firing four shots at Ma'Khia.

The 16-year-old then slumped to the ground with the knife by her side while officers summoned a medic.

The fatal shooting devastated and outraged many demonstrators who've protested police killings of Black Americans and other people of color, particularly because, according to bodycam footage, the officers who responded didn't appear to de-escalate the situation and fired on Ma'Khia, a teenager, while she was holding a knife.

"People, including LeBron James or including others ... I know many people feel as though they did not witness police work," said Ibram X. Kendi, author of "How to Be an Antiracist" and director of Boston University's Center for Antiracist Research, in a Thursday appearance on CNN's New Day. "They witnessed someone being killed and even potentially murdered."

Ma'Khia's death is the second high-profile killing of a teenager by police in the last month. At the end of March, Chicago police fatally shot Adam Toledo, a 13-year-old boy. Police said less than a second passed between the moment Toledo was seen holding what police claim was a handgun and the moment an officer shot him.