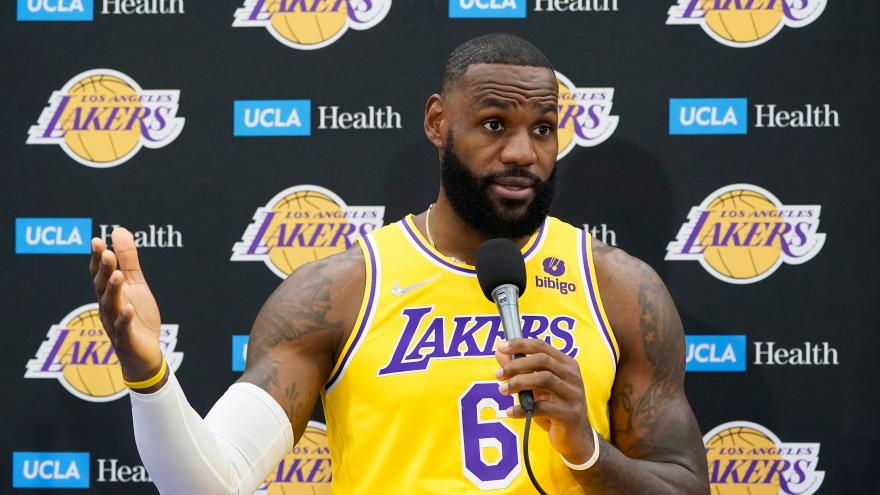 (CNN) -- NBA superstar LeBron James confirmed Tuesday he received the Covid-19 vaccine, months after being initially skeptical of it.

"Everyone has their own choice to do what they feel is right for themselves and their family and things of that nature," James said during the Los Angeles Lakers media day in El Segundo, California. "I know that I was very skepticism (sic) about it all. But after doing my research and things of that nature, I felt like it was best suited for not only me but my family and my friends. That's why I decided to do it."

During an interview in May, James refused to say whether he was vaccinated.

"It's not a big deal," James stammered, followed up by a chuckle.

James said Tuesday that while he is vaccinated, it wasn't his place to impose that decision on others.

"We are talking about people's bodies and well beings. I don't feel like for me personally that I should get involved in what other people should do for their bodies and livelihoods. ... You have to do what's best for you and your family," James said.

James' admission of his vaccination status comes as athletes in the NBA and other leagues grapple with vaccine hesitancy among players. About 90% of NBA players are vaccinated, according to ESPN.

Some players are still skeptical about vaccines

The NBA does not require players to be vaccinated against Covid-19 to play. However, referees and other staff who work closely with players are required to be fully vaccinated.

Earlier this month, the NBA warned that vaccine mandates set by New York City and San Francisco could prohibit players of the Brooklyn Nets, New York Knicks and Golden State Warriors from competing in home games this season if they are not vaccinated or exempted.

Players from visiting teams who compete at the city's arenas are not included in the local governments' vaccination mandates.

CNN learned this week that the Knicks have fully vaccinated all their players, whereas the Nets and Warriors have yet to do so, or gain exemptions.

The NBA denied Golden State Warriors star Andrew Wiggins' request to be exempt from the vaccine for religious reasons, making him ineligible to play home games until he reaches San Francisco's vaccination requirement, the league announced on Friday.

Brooklyn Nets point guard Kyrie Irving did not disclose his vaccination status Monday during the Nets media day. He also did not say if he expected to be vaccinated or compliant by the time the Nets return home following their preseason game against the Lakers on Sunday.

He said he wants "to keep that stuff private."

"I'm a human being first," Irving said. "Obviously living in this public sphere, it's just a lot of questions about what's going on in the world of Kyrie and I think I just would love to just keep that private and handle it the right way, with my team and go forward together with the plan."

Orlando Magic forward Jonathan Isaac tweeted from his verified account on Sunday that he believes it's a person's "God given right to decide if taking the vaccine is right for you! Period!"

Isaac clarified his comments on Monday during a news conference saying he's not anti-vax, anti-medicine or anti-science.

Washington Wizards guard Bradley Beal, who could not compete at the Tokyo Olympics after being placed in USA Basketball's health and safety protocols, said he doesn't "feel pressure" to get the vaccine, ESPN reported.

"This is a war that we're involved in. And masks and vaccines -- they are the weapons that we use to fight this war," Abdul-Jabbar said.

Abdul-Jabbar also told Rolling Stone players who are not vaccinated should be removed from the team.