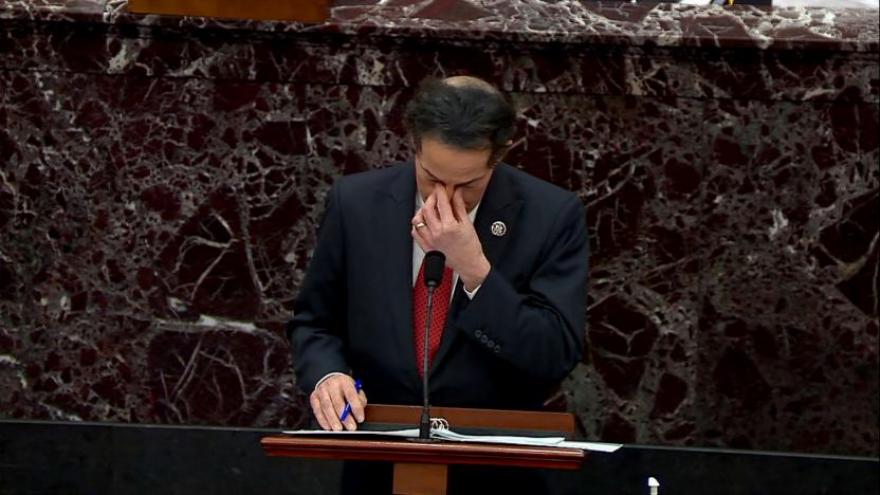 (CNN) -- Lead House impeachment manager Rep. Jamie Raskin on Tuesday delivered a tearful account of his experience during last month's US Capitol insurrection, charging that the deadly episode "cannot be the future of America."

Addressing lawmakers during former President Donald Trump's second impeachment trial, Raskin explained that his younger daughter, Tabitha, and son-in-law, Hank -- the husband of Raskin's oldest daughter -- had accompanied him to Capitol Hill to witness the counting of electoral votes on January 6.

Raskin recalled that Tabitha and Hank had asked him if it would be safe, and he said he had told them, "Of course it should be safe; this is the Capitol." The Maryland Democrat then choked up as he talked being separated from the pair as the pro-Trump mob breached the Capitol complex and spurred hours of chaos.

"I couldn't get out there to be with them in that office. And all around me people were calling their wives and their husbands, their loved ones, to say good bye. Members of Congress -- in the House, anyway -- were removing their congressional pins so they wouldn't be identified by the mob as they tried to escape the violence," Raskin recounted.

"Our new chaplain got up and said a prayer for us, and we were told to put our gas masks on," he continued. "And then there was a sound I will never forget, the sound of pounding on the door like a battering ram. The most haunting sound I ever heard, and I will never forget it."

Raskin said that once they were reunited after the attack he told Tabitha "how sorry I was, and I promised her that it would not be like this again the next time she came back to the Capitol with me."

"You know what she said? She said, 'Dad, I don't want to come back to the Capitol,' " Raskin said, choking up and wiping his eyes before taking a moment to collect himself. "Of all of the terrible, brutal things that I saw and that I heard on that day, and since then, that one hit me the hardest."

Raskin's emotional remarks came after he had opened his presentation with a video showing disturbing footage of how protesters had overrun police and ransacked the Capitol, forcing lawmakers in the House and Senate to flee their chambers.

The video was spliced with Trump's speech on January 6 ahead of the riots, showing the crowd's reaction to Trump as he urged them to head to the Capitol.

Raskin has tried his best to keep focused on the task in front of him since his son's death. Lawmakers and aides who have worked closely with Raskin say Tommy's memory has provided a kind of fuel for the congressman to keep going through hours-long prep sessions, votes and floor debates.

After Tommy's death, Raskin and his wife, Sarah Bloom Raskin, wrote a moving tribute to Tommy and all the people he had inspired. Tommy was "an anti-war activist, a badass autodidact moral philosopher and progressive humanist libertarian, and a passionate vegan," they said.

In his 20s, Tommy suffered from "a blindingly painful and merciless 'disease called depression,' " Raskin and his wife wrote. "He left us this farewell note on New Year's Eve day: 'Please forgive me. My illness won today. Please look after each other, the animals, and the global poor for me. All my love, Tommy.' "

Raskin would have been forgiven for stepping away after his son's death, but he's said that he's taken his son's departing message to heart to help him push forward.

"Tommy left us a note," Raskin previously said. "He didn't have anything in there about take some time off."

The lead impeachment manager ended his stirring speech Tuesday with a simple declaration: "This cannot be the future of America."

"We cannot have presidents inciting and mobilizing mob violence against our government and our institutions because they refuse to accept the will of the people under the Constitution of the United States."