Members of Congress fear for their lives and security after deadly riot, sources say 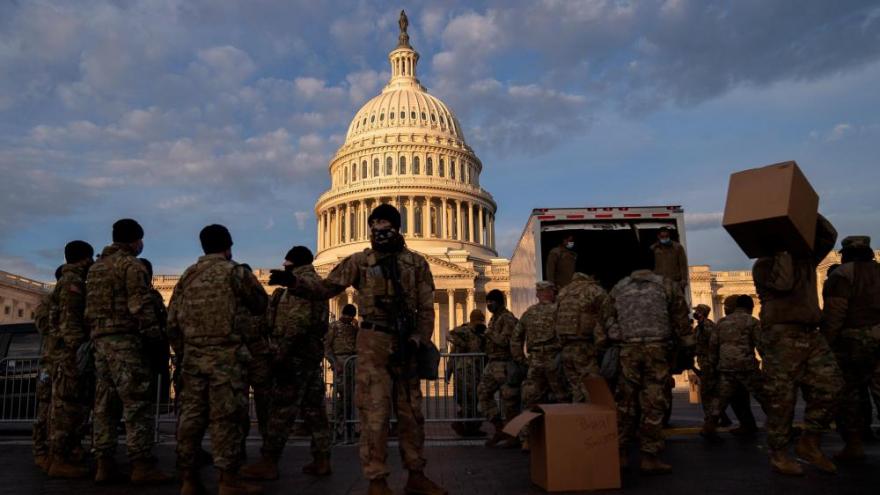 Members of the National Guard unload supplies outside the U.S. Capitol on January 14, 2021 in Washington, DC.

(CNN) -- There is growing concern about security on Capitol Hill, as well as worries from lawmakers facing threats to their personal safety, law enforcement sources and members of Congress tell CNN.

The more they learn in news reports and online, the more concerned they grow, several sources said. There's a growing realization about the danger they were in, the sources said, especially when they see videos that reflect how coordinated the attack seemed at times.

One video of particular concern shows militia members with their arms on each other's shoulders, pushing each other in a line that snakes through a crowd surging against a door into the Capitol building, one congressional source told CNN.

Rep. Peter Meijer, a freshman Republican from Michigan said on CNN Wednesday he was afraid of the threats he was going to face for being one of 10 Republicans to break ranks and vote to impeach Trump.

"I am," Meijer said on CNN when asked if he was afraid of threats being made against him. "But I am not going to let that sway my decision. I think if we give the assassins veto, if we give the insurrectionists veto, we lose something in this country, and I won't let that happen again."

Meijer has since added that he plans to buy body armor and was adjusting his daily routines to protect himself from death threats.

"It's sad that we have to get to that point, but you know, our expectation is that someone may try to kill us," Meijer said Thursday on MSNBC.

Republican Rep. Dusty Johnson of South Dakota told PBS NewsHour on Wednesday that he had "absolutely" received threats against his life from Trump supporters prior to the impeachment vote pressuring him to vote in favor of the President after he voted to certify the 2020 presidential election results for Joe Biden. Johnson did not vote to impeach Trump.

"I mean just today, just this morning, one of my offices received a threat against my life. I've received other threats against my safety. My address, a picture of my home where my family lives was posted on kind of an anti-Dusty Facebook page. These are dark times. There is a tremendous amount of outrage and rage" Johnson told PBS Wednesday. "The reality is, I think not just me but all of my colleagues, we need to acknowledge we may well be in danger, but we still need to do our jobs."

Johnson said the threats so far are coming from supporters of President Donald Trump so far.

"In the last week, a preponderance of the threats have come from those on the extreme far right," acknowledging that in the past he has received threats from the left.

Projecting safety concerns about the upcoming inauguration, House Majority Whip Jim Clyburn told CNN Wednesday that while he felt safe being at the Capitol that day, he was unsure about how safe he would feel on Inauguration Day until he was given more details.

"I feel safe today, I have no idea how I'm going to feel on the 20th because I don't know what they are going to put in place" Clyburn, a South Carolina Democrat, said.

Since the violent attack on the Capitol and in preparation for inauguration, metal detectors have been installed in front of the House floor that all members and staff must pass through, a move met with pushback from all sides. While some have complained of its inconvenience or pointed out how the lines it has created could result in Covid exposure, other have pointed out their installation underscores the lack of trust that exists on the Hill in the wake of the attack.

"It's a very sad commentary that we've had to install metal detectors outside the House floor because fellow colleagues could pose a threat to the safety and security of members" a Democratic aide told CNN.

Similarly, some Republican members have also been uncomfortable about some of their caucus who are known to carry guns, according to a GOP source.

Several House members have been making inquiries with private security firms about obtaining personal protective details in the wake of violence and threats against Congress, according to a person familiar with the security planning.

In response to mounting concerns from members about their safety, the Committee on House Administration circulated a letter earlier this week reminding them what security measures they could expense, and the process for beefing up their security protocols. Members can get reimbursed for purchasing a bulletproof vest, for hiring security personnel in certain instances or for getting their own security training, and for making a range of security enhancements to their district offices.

Lawmakers are adamant that the pressure must be kept up on Trump to keep him in check in during these the final days, the sources told CNN. McConnell has leverage over the President because he could, at least theoretically, begin the impeachment trial before Trump leaves office, if he wanted to take that step.

As CNN previously reported, there are still more questions than answers about whether the pro-Trump rioters had any inside help.

There are early indications, as well as unverified accusations, that some GOP lawmakers collaborated with some of the extremist conspiracy theorists that organized the rallies and could have even given "reconnaissance" tours to rioters before the attack.

A group of Democratic lawmakers asked the US Capitol Police to launch an investigation to possible collaboration between members of Congress and the rioters who attacked the building.

Rep. Jason Crow, a Colorado Democrat who was captured in an iconic photograph hiding in the House gallery during the attack, said Thursday on CNN that some lawmakers gave tours even though tours have been prohibited since the pandemic began.

"We are going to follow where the facts lead us," Crow said. "We're not going to make any assumptions. I'm not a mind reader."

He also said he had "misplaced confidence" in the US Capitol Police to keep him and other lawmakers safe from threats.

Rep. Mary Gay Scanlon, one of the co-signers of the letter, confirmed to CNN that she saw groups of six to eight people in MAGA apparel on tours. one or two days before the attack.

"I had seen what appeared to be tour groups of folks dressed in MAGA attire, in the halls, in the tunnels" Scanlon told CNN.

"I don't know exactly what day it was, it was just surprising to see that happen because since Covid the building has been shut down. There aren't supposed to be any tours. So I kind of assumed it must be a new member who didn't know the rules or something. But, I mean, I can verify that it happened. There were people who were roaming around in the halls, apparently under the guidance of congressional staff."

As the massive criminal probe ramps up, this angle will be an intense focus for the Justice Department and FBI as they try to figure out if any lawmakers or staffers aided a conspiracy to attack the Capitol and disrupt the Electoral College proceedings.

"Much more will become clear in coming days and weeks, but what we know now is enough," Rep. Liz Cheney, the No. 3 Republican in the House, said in an ominous statement earlier this week announcing her strong support for Trump's impeachment.

It isn't clear what future revelations Cheney was referring to, but she is a plugged-in lawmaker with connections throughout Washington, who would likely be in a position to gain insights on the investigation before things become clear to the public.

This story and headline have been updated to include additional developments Friday.