Lawmakers reintroduce Juneteenth bill. This 94-year-old will do 'whatever it takes' to make it a national holiday 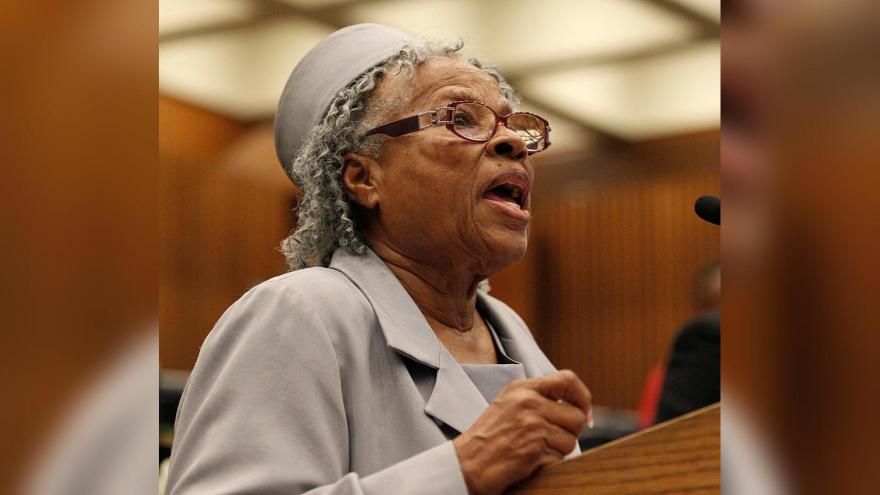 Lee has walked thousands of miles from Fort Worth to Washington, DC, to ensure June 19 -- the oldest regular US celebration of the end of slavery -- becomes a national holiday.

(CNN) -- Days after a winter storm put Texas at a standstill and her home's water pipes burst, Opal Lee headed to the nation's capital. Her years-long push to get Juneteenth recognized nationwide had to go on.

"I refuse to let the efforts we've made down the vine," said Lee, a 94-year-old activist from Fort Worth on Thursday.

Lee has walked thousands of miles from Fort Worth to Washington, DC, to ensure June 19 -- the oldest regular US celebration of the end of slavery -- becomes a national holiday. More recently, she started a petition on Change.org that has since then gathered 1.5 million signatures.

Lee flew to DC this week to push for Juneteenth legislation. She wasn't expecting lawmakers to re-introduce the legislation this week but said she was so happy she could do a "holy dance."

After the death of George Floyd fueled a racial reckoning and the riot at the US Capitol put into deeper focus the nation's divide, it appears that Lee's efforts could potentially be coming into fruition.

Democratic Sen. Edward J. Markey of Massachusetts, who sponsored the legislation, said Juneteenth commemorates the day that word of emancipation reached people in Texas in 1865 but "the struggle for true Black liberation continues" to this day.

"For too long, we have tried to whitewash our nation's history instead of confronting the uncomfortable and painful truth," Markey said in a statement. "This legislation to make Juneteenth a federal holiday is but one step we can take to begin to right the wrongs of the past and ensure equal justice in the future."

Support for Juneteenth has never been stronger, Lee says

While the holiday was informally commemorated in later years, Texas became the first state to make it a state holiday in 1980. Last year, numerous states, cities and colleges across the US moved to recognize it as an official holiday.

For Lee, commemorating the holiday means more than recognizing a historical moment. It's about embracing unity and equity.

"We need to be aware that we can do so much more together than being apart," Lee told CNN. "We can pull our resources (together), learn from each other, and make the world a better place to live."

Nearly 156 years after the historic date, the heightened awareness for Juneteenth "has never been stronger," and Lee has recognized the impact of Floyd's death.

"Never before, millions have been aware of the atrocities that happened to the enslaved or the blatant disregard for human life that is now occurring, (which is) a residual effect of slavery," she told legislators and guests Thursday in a press conference.

As Lee approaches her 95th birthday, the activist told CNN, she is more motivated than ever to continue her campaign. She's had cataract surgery and is taking precautions due to the Covid-19 pandemic, but "other than that, here I am ready to do whatever it takes," Lee said.

After talking with legislators this week, Lee is traveling back to Fort Worth, where she delivers boxes of food twice a month to those in need who can't go to local food banks. Then, she will continue seeking signatures for her petition.

"We need all the signatures we can get so that Congress doesn't feel like this old lady in tennis shoes and her little organization are the only ones wanting Juneteenth to be a national holiday," she said.