Lawmakers in 47 states have introduced bills that would make it harder to vote. See them all here 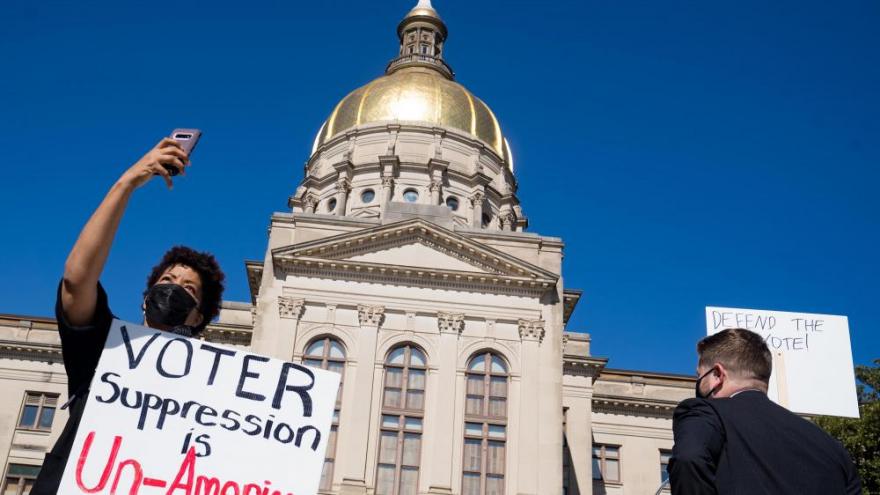 Demonstrators stand outside of the Capitol building in opposition to House Bill 531 on March 8 in Atlanta, Georgia.

(CNN) -- Lawmakers in all but three states have introduced bills aimed at restricting ballot access, according to a new tally by the Brennan Center for Justice at New York University.

Their latest report finds 361 bills restricting voting have been introduced in 47 states as of March 24. The total, released Thursday morning, marks a 43% rise in the number of bills introduced since Brennan last released a count a little over a month ago.

Three states have led the country in the number of bills that aim to restrict the vote: Texas with 49 bills; Georgia, 25; and Arizona, 23.

The rise reflects a sharp contrast to a year ago -- before the Covid-19 pandemic and well before the 2020 presidential election -- when state lawmakers were far less interested in restricting voting access. The Brennan Center's review of state legislation in February 2020 identified only 35 restrictive bills in 15 states.

The legislative push is part of a national Republican effort that aims to restrict access to the ballot box following record turnout in the election. Republicans currently control both chambers of 30 state legislatures, including in Texas, Georgia and Arizona. The only three states that had not yet introduced a voting bill with restrictive provisions are Delaware, Ohio and Vermont.

More than half of the 361 bills would make it harder to vote absentee and by mail, after a record number of Americans voted by mail in November. Nearly one in four restrictive bills seek to impose stricter voter identification requirements.

Texas has introduced 25 bills that would limit absentee and mail-in voting, more than any other state. Georgia and Arizona -- two key battlegrounds that flipped from 2016 to vote for President Joe Biden in 2020 -- follow Texas with 20 and 14 introduced bills targeting absentee voting, respectively.

As the current leader for the most restrictive bills introduced overall, Texas is a key state to watch as bills continue to advance in its legislature. Seven restrictive bills have already advanced through the Texas legislature, meaning that a bill has either passed in at least one chamber or has otherwise seen action at the committee level.

Not every bill introduced will pass, or even reach a vote. But five have already been enacted into law and at least 41 others were advancing through the state legislative process as of March 24. Those five include SB202 in Georgia, the omnibus voting bill that has generated national controversy. The other four include an omnibus law in Iowa, two laws in Arkansas that tighten voter ID requirements, and one in Utah that mandates swift removal of dead people from the voting rolls.

State lawmakers are likely to act quickly in the upcoming months to introduce more legislation and attempt to get their bills over the finish line for the year. All but 12 state legislatures plan to adjourn by June 30, according to the National Conference of State Legislatures.