Lawmakers close in on next round of coronavirus stimulus, but testing remains key sticking point 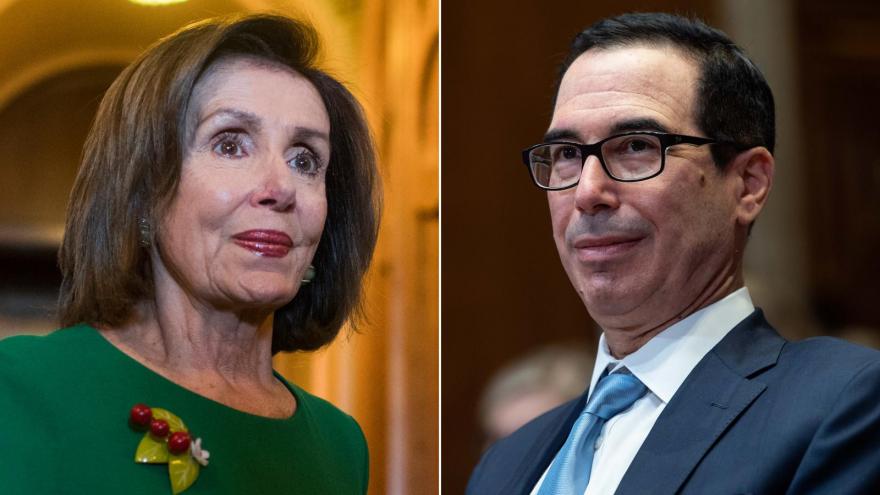 (CNN) -- Congressional lawmakers and the Trump administration are on the verge of striking a deal on a nearly $500 billion package to extend funding for an emergency small business lending program, provide additional funding for hospitals and expand funding for coronavirus testing.

Nothing is final until everything is agreed to -- and they aren't there yet. But a resolution to a weeks-long stalemate is coming.

The Senate does have a brief pro forma session Monday at 2 p.m. ET, but, according to at least three sources familiar with the negotiations, congressional observers should not expect the deal to be finished by then as discussions continued into the afternoon.

Fewer than four weeks ago, Congress passed the largest economic rescue package in the country's history at $2 trillion. Now they are about to move forward on another *half-trillion*-dollar package -- and this is only considered an "interim" package before a significantly larger deal. If you want to know how truly devastating the economic damage is right now, just look at this response. The scary part? This comment from a senator to CNN Sunday night: "This still isn't enough. Not even close."

There was no shortage of optimism on Sunday as Democrats and administration officials made clear a deal was near, and leaders in both parties held calls with their respective caucuses to lay the groundwork for the agreement. But they aren't there yet, according to multiple people involved. Late Sunday night, the two sides were still having significant disagreements on a few elements on the package, the people said.

"This will get done. It has to," one source told CNN before cautioning that action as soon as Monday was "maybe a bit too optimistic."

What to watch Monday:

What lawmakers and small business owners are talking about

In the dozens of conversations we've had with small business owners and lawmakers over the last several days about various elements of the Small Business Administration's Paycheck Protection Program, almost to a person, one thing has been a constant: frustration (and in some cases white-hot rage) about the large restaurants that have received PPP loans.

To be clear, it's all legal -- and the result of a specific provision in the law restaurants lobbied for during the legislative drafting of the program (and many, many lawmakers hearing from restaurants back in their states and districts were supportive of that carve-out, it should be noted).

But Ruth's Chris Steakhouse, Potbelly, J. Alexander's, Jura Sushi and others announcing in government filings they'd received millions from a tapped-out small business program has drawn significant anger from small business owners -- and some reflection from lawmakers who wish the law was drafted in a tighter manner.

That said, public pressure, particularly in instances like this, can often do far more than legislative amendments.

House Majority Leader Steny Hoyer, a Maryland Democrat, notified members Sunday they would need to return to Washington this week to vote on the package. Democrats have expected Republicans will call for a recorded vote. The expectation is it would occur sometime mid-week, but it all depends on a final agreement being reached.

The biggest sticking point is over the testing piece of the package. Democrats want Republicans to agree to making the Trump administration come up with a national testing plan in addition to the $25 billion they want to boost testing. The money isn't an issue. But multiple sources say that attaching strings that could potentially put the President and the administration in the seat for a political blame game is an issue.

"Republicans view this as a political play," one source said.

The longer these negotiations have gone on, the more obvious it has become that the needs are far greater than replenishing the depleted PPP funds. What began as a straight $251 billion request to increase money for the PPP has morphed into a package that is expected to include $75 billion for hospitals and at least $25 billion to boost the country's testing capacity in addition to more money for SBA.

The money for SBA has also grown to at least $300 billion for the PPP loan program and additional money for Economic Injury Disaster Loan Emergency Advance that has faced a massive increase in application volume over the last month.

The growing cost of the legislation is symptom of just how rapidly the economic outlook for the country is shifting week to week. What began as an offer by Republicans to simply increase the amount of money for SBA became a much larger bill in part because members themselves were hearing from cash-strapped hospitals. And, as the country grows tired of stay-at-home-orders, testing is only becoming more of a priority for Americans anxious to get back to work.

Democrats, if they are being candid, will acknowledge the push for state and local government funding has been a bridge too far for days now. They wanted it, they won't get it, but they will get significant funds for several other key pieces they've pushed for the last two weeks.

House Speaker Nancy Pelosi held a call with her leadership team on Sunday and Democratic Senate leader Chuck Schumer has remained in close touch with his members over the last several days as the deal has come together.

Majority Leader Mitch McConnell, a Kentucky Republican, held a call with his members Sunday afternoon to gauge support for the broad outlines of the package. The call also included President Donald Trump, Treasury Secretary Steven Mnuchin and White House chief of staff Mark Meadows. According to one source familiar, Trump said little on the call, but his presence spoke volumes about his desire to get the package passed quickly. Again, when you can only pass items by unanimous consent, you have to have every single member on board. Trump's presence on the call was intended to send a message that this is important to the President.

House Republicans also held a Sunday call with Mnuchin and Meadows. The call was an opportunity to brief members on the latest contours of negotiations, but also another chance for Republicans to voice the concerns they have about specific regulations related to PPP.

Rep. Mark Amodei, a Republican from Nevada, continues to share his concerns on the calls that smaller casinos aren't eligible for PPP loans.

Members also raised concerns Sunday that restaurants applying for PPP are having a hard time getting workers to come back under their payroll because in some instances, unemployment insurance payments are higher than what they could provide. Remember: PPP is supposed to go largely to paying payroll costs (Treasury wrote it so that 75% of the loan is supposed to go to payroll), something Republicans and Democrats have voiced frustrations with. Many argue that businesses like restaurants need the money to pay utilities or high rent.

Where the administration stands

The administration, and congressional Republicans, drew one clear line in the sand in opposing Democratic efforts to add funding for state and local governments to the package. But there's no question Mnuchin and the White House have moved toward Democrats on this looming deal. That said, much of what Democrats were asking for wasn't all that controversial. But it did take time to pull together, draft and agree on (an agreement that still hasn't been officially clinched as of Monday afternoon). That fact has outraged Republicans who simply wanted to re-up the funding for a program that was already massively oversubscribed.

Mnuchin, in his interview on CNN's "State of the Union" Sunday, made clear funds for state and local governments would be a piece of the next legislative package.

"The President has heard from the governors and he's prepared to discuss that in the next bill," Mnuchin said.