Lawmaker donates suit he wore to clean up Capitol riot to Smithsonian, 6 months after deadly insurrection 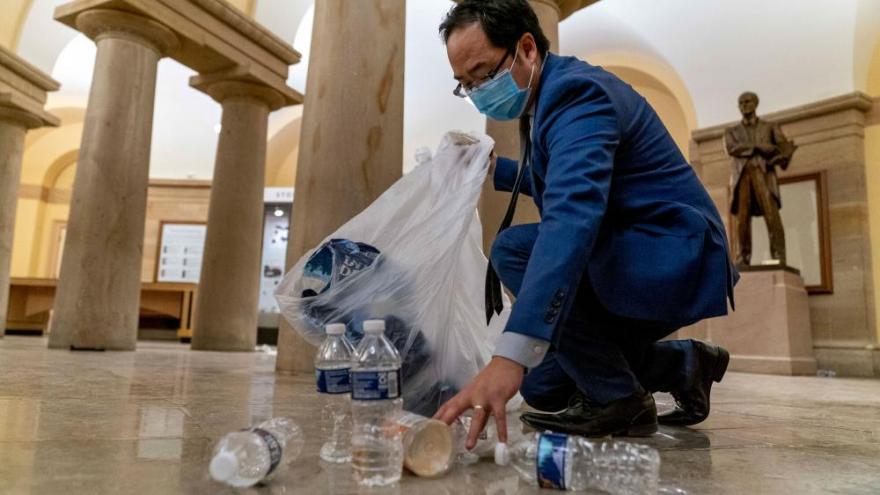 Rep. Andy Kim, a Democrat from New Jersey, cleans up debris and trash strewn across the floor in the early morning hours of January 7, after protesters stormed the Capitol in Washington.

(CNN) -- Around 11 p.m. ET on January 6, Rep. Andy Kim was walking around the US Capitol with a trash bag in hand, trying to clean up after insurrectionists ransacked the building just hours earlier, when the New Jersey Democrat came across a plaque commemorating the cornerstone of the Capitol laid by George Washington.

"It was just a very profound moment," Kim told CNN, recalling what it was like to stand in front of the plaque marking a monumental moment in the Capitol's history. "It hit me in that moment, the magnitude of what happened. It occurred to me that this was actually probably the worst condition that the Capitol and Rotunda had been in for hundreds of years."

Six months after the attack, Kim announced that he would be donating the suit he wore in the now infamous moment he was captured cleaning up the damage done to the Capitol to the Smithsonian as the museum builds its exhibit documenting what happened on January 6. His comments and donation illustrate how many lawmakers are still processing the violent riot, which shook Capitol Hill, abruptly halted the certification of President Joe Biden's victory and eventually led to arrests of more than 500 people.

"It was tough for me to think through this in terms of saving items from that day for history's sake. I wasn't quite there yet in my mind because I was trying to deal with moving forward," Kim said, recounting how he felt when the Smithsonian initially approached him about donating something to their exhibit.

"But, it was starting to see the reactions from people around the country to that day in particular, to my actions in the suit that made me realize that this was something that might help tell that story beyond just the photographs and the video footage to have something tangible."

Framing the moment he started to clean up the Capitol with six months of time to process, Kim said, "I think a lot of people see that action that I did and wearing that suit as perhaps one of the first actions of recovery for our country."

Kim explained why he felt compelled to start cleaning up in the first place in-between votes to certify the 2020 presidential election results when it was finally safe for members to come back and cast their votes.

"When I walked into the Capitol, I saw a really disgraceful scene of just, you know, trash everywhere and broken furniture. That's when I started to clean up," Kim said. "I saw myself that night as a caretaker for our democracy and as a result of a caretaker for the Capitol."

"I continued for about an hour and a half or so throughout the Capitol just trying to get the building back in shape as best as I could. I just, really felt compelled to try to reverse as much of the damage as possible. I just felt like that was an important part of moving forward."

Even as Kim spoke on Tuesday, he got emotional remembering what he lived through on that fearful day.

"I get emotional still, six months later. It's just --," Kim paused to collect himself. "It was a tough day."

Kim is not the only member marking the six-month mark since the violent riot.

"Six months have passed since our Capitol was attacked, and the scars are still very much with us, though some of them are not visible" Virginia Democratic Rep. Don Beyer tweeted. "Many around us still feel the trauma of that day, and it's important that we continue to take care of each other. It's always OK to seek help."

Republican Rep. Liz Cheney of Wyoming, who was ousted from her House GOP leadership position earlier this year over support for impeaching Trump, also called attention to the six-month anniversary on Tuesday.

"Six months ago today our Capitol and Constitution were attacked," Cheney tweeted, linking to a New York Times story on the riot.

Some Democrats are using the opportunity to point out that many Republicans have stood in the way of allowing Congress to create a bipartisan, independent commission to investigate what happened on January 6 and restate their commitment to uncovering what happened. The House has instead voted to create a select committee to investigate the insurrection.

"Six months ago, a violent mob stormed the Capitol trying to undermine our democracy. Lives were lost and countless more endangered" Democratic Rep. Adam Schiff who was chosen to serve on the select committee alongside Cheney, tweeted. "And Republicans are desperate as ever to keep the truth of that dark day hidden. Enough. It's time to follow the facts, wherever they lead."

Democratic Rep. Stephanie Murphy of Florida, who was also chosen to serve on the select committee, tweeted a photo of the damage done to the Capitol that day and said, "as a member of the 1/6 Select Committee, I'm ready to get to work to find the truth and secure our democracy."