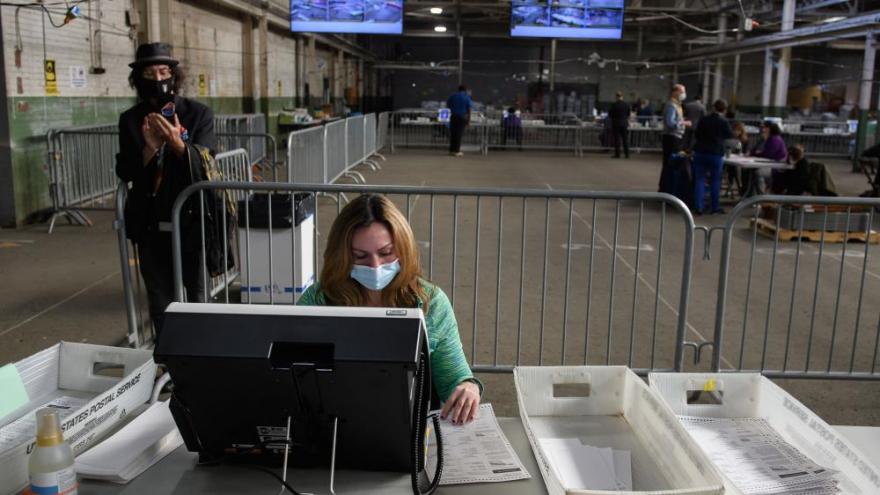 A Trump campaign poll watcher films the counting of ballots at the Allegheny County elections warehouse on November 6, 2020 in Pittsburgh, Pennsylvania.

(CNN) -- A law firm representing the President's campaign in a controversial and long-shot attempt to block Pennsylvania's popular vote for Joe Biden is leaving the case.

The firm, Porter Wright Morris & Arthur, had two Pittsburgh-based lawyers leading the effort for the Trump campaign in Pennsylvania. Both told a judge in an overnight filing they were withdrawing, and the Trump campaign may bring in new counsel.

The Trump campaign is now down to one lawyer in the federal court effort in Pennsylvania -- a solo practitioner in Philadelphia named Linda Ann Kerns who touts her media appearances and commentary as much as her legal experience.

Biden is leading by nearly 60,000 votes and CNN has projected him to win the state's 20 electoral votes.

Porter Wright is a mid-sized Midwestern law firm built to primarily represent corporations. Its choice to leave the Trump case signals a growing discomfort nationally with the President's continued wish to push unfounded attacks on voting and undermine Biden's win in several key states with a play to block the popular vote and sway the Electoral College in his favor.

The case has major arguments and a hearing on evidence about voting set for next week.

The judge over the case, Matthew Brann, earned his seat during the Obama years but is a longtime leader in the Republican Party in Pennsylvania.

Earlier this week, Jones Day, a large and elite law firm that has long represented the interests of Trump, publicly distanced itself from cases where the President is contesting the popular vote or alleging voter fraud.