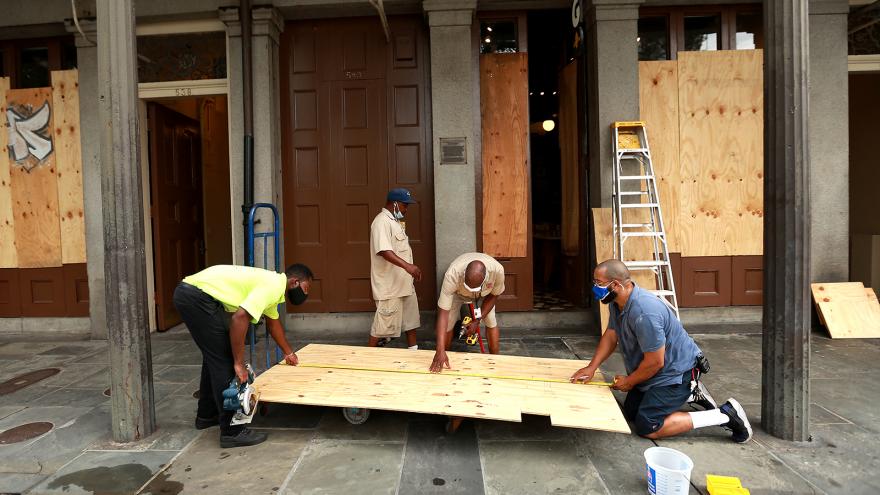 (CNN) -- Laura grew to a hurricane on Tuesday and is expected to rapidly intensify in the next 36 hours as it barrels up the Gulf of Mexico toward Texas and Louisiana.

Hurricane Laura currently has maximum sustained winds of 80 mph, according to a National Weather Service bulletin, and is forecast to intensify into a major Category 3 storm or higher over the next day or so, with winds potentially reaching 115 mph. The center of the storm is located 510 miles from Galveston, Texas, and it's moving at a rapid clip of 17 mph.

A hurricane warning has been issued for portions of the Texas and Louisiana coastline, according to the National Hurricane Center. The warning, an upgrade from the earlier hurricane watch, stretches from San Luis Pass, Texas, through Intracoastal City, Louisiana.

The warning includes Galveston and Galveston Bay, as well as portions of the Houston metro area.

The NHC warned that Laura is expected to produce 4 to 8 inches of rain from Wednesday night into Saturday, with isolated maximum amounts of 12 inches across parts of the Gulf Coast. This could cause widespread flash and urban flooding, the NHC said.

Laura's impending arrival comes as the Gulf Coast avoided a powerful storm in Marco, which significantly weakened before reaching the US.

As a Tropical Storm, Laura killed at least nine people in the Caribbean. When it makes landfall in the US, it could bring storm surge of 9-11 feet along portions of the coast, the NWS said, and the surge could "could penetrate up to 30 miles inland," in southwestern Louisiana and far southeastern Texas.

Evacuations in coastal Texas and Louisiana

Houston, the largest city in the region, is particularly vulnerable to flooding and could see some impacts from Laura. The concrete-filled city has notoriously poor drainage systems and a propensity to flood, such as during the overwhelming rainfall from Hurricane Harvey in 2017.

More than 100 people died in Texas due to the evacuations, including 24 nursing home evacuees aboard a bus that caught fire and exploded.

The threat from Laura has already sparked evacuations in parts of Texas and Louisiana.

Galveston issued a mandatory evacuation order for all residents, citing the storm's strength and uncertain path, according to a post on the city website.

Mandatory evacuation orders have been issued in a number of coastal counties in Texas, including Jefferson County, Jasper County and Hardin County, officials said.

A mandatory evacuation was also announced for Calcasieu Parish in southwest Louisiana, and non-essential personnel are being ordered to leave the parish.

At the same time, government agencies and volunteer organizations moved to prepare for the incoming storm.

Texas predeployed two Urban Search and Rescue teams (USAR) and at least eight water rescue squads, according to a spokesperson for one of the teams.

"The uncertainties of this storm and its increasing strength have prompted mandatory evacuations for more than 300,000 residents in East Texas and along the Gulf Coast," Merribeth Kahlich, a public information officer with one of the search teams, told CNN via email.

With Marco no longer posing an impending threat, Louisiana Gov. John Bel Edwards said Monday night all eyes are now on Laura. His big concern was large amounts of rainfall and river flooding.

The Gulf was predicted to be in danger of back-to-back powerful storms with Laura striking within miles and 48 hours after Marco.

Edwards worried earlier in the week that "there may not be much of a window" to enact power restoration and rescue efforts between storms.

But Marco made landfall near the mouth of the Mississippi River as a tropical storm, and later that night was downgraded once more to a tropical depression.

Overnight, Marco was traveling west along the Louisiana shoreline, but it will likely fizzle out over open waters as it heads toward Texas, said CNN meteorologist Michael Guy.

The tornadoes and storm surge that Marco threatened to bring along with it as it moved along the Gulf Coast are no longer a source of concern, Guy said. However, the storm could still be a rainmaker, and localized areas could see up to five inches of precipitation.

9 people killed in the Caribbean

At least nine people have died in the Caribbean, including several in the Dominican Republic and Haiti, due to Laura.

The victims include a 7-year-old boy who died along with his mother after a wall collapsed in their home in the Dominican Republic. Another person died after a tree fell on a house.

Five people were killed in Haiti, including a 10-year-old girl, the country's civil protection agency said.