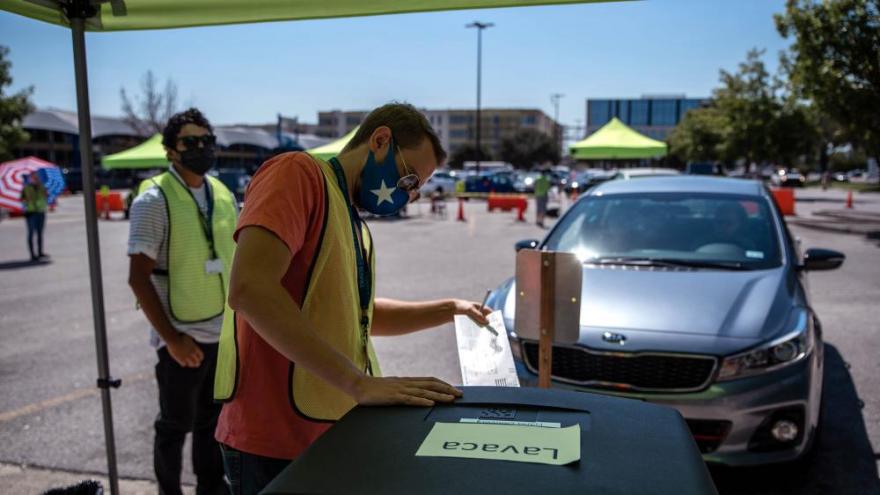 A worker wearing a protective mask puts a ballot into a secure box at a drive-thru mail ballot hand delivery center in Austin, Texas on October 2, 2020.

The ruling from a three-judge panel on the Fifth Circuit Court of Appeals came a day before early voting begins in Texas Tuesday.

Texas joined many other states that responded to the Covid-19 pandemic by expanding early voting days. But Texas is among the most restrictive states for mail-in voting, requiring voters to provide an excuse if they are under 65, and limiting the number of ballot dropboxes to one per county, even in counties with millions of residents.

Some Texas counties wanted to establish multiple locations for voters to deliver their ballots, but Abbott ordered a limit to one per county citing election uniformity and security, according to court documents.

Texas Attorney General Ken Paxton, a Republican,had filed an emergency motion Saturday for a stay to block a district court order that would have allowed county officials to accept hand delivery of mail-in ballots at additional locations, including any county annex or satellite office. The court granted Paxton's request over the weekend and temporarily blocked the lower court ruling, before formally reversing it late Monday night.

"The district court's order undermines our election security, disrupts the democratic process, and will only lead to voter confusion. It cannot stand," Paxton said in the news release.

CORRECTION: An earlier version of this story incorrectly identified who issued the ruling. It was issued by a three-judge panel on the Fifth Circuit Court of Appeals. The story also incorrectly described Texas Gov. Greg Abbott's directive. It allowed only one ballot drop box location per county in the state.