Last summer, this school district served kids 36,000 meals a week. This summer, it will be lucky to serve 600 a week. Here's why. 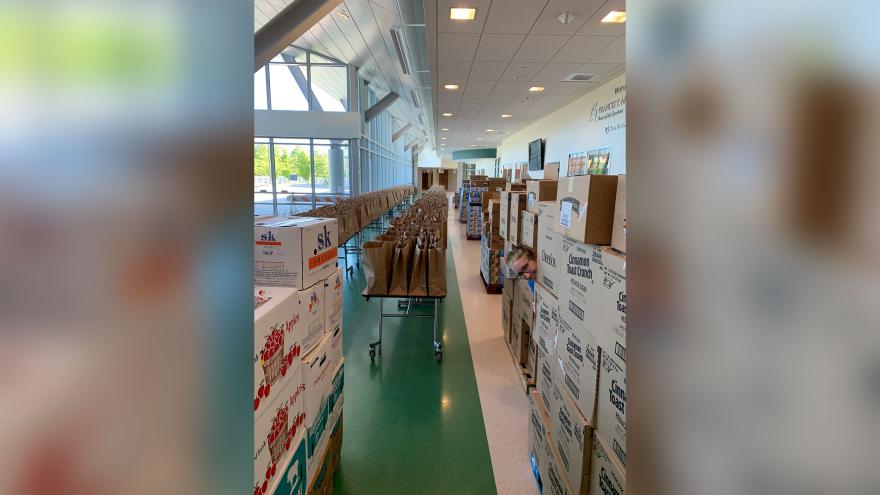 (CNN) -- Last summer, Shenae Rowe was able to provide 36,000 meals a week to hungry kids throughout Warrick County in rural southwest Indiana. Parents could pick up a week's worth of food in one trip to take home.

This summer, the Warrick school district's director of food and nutrition is hoping to serve 600 meals a week. Breakfast and lunch will only be available in two schools in the spread-out district instead of nine schools, and only for four weeks instead of the whole summer. Plus, kids will have to eat on site rather than be able to bring the food home.

"It makes my heart break," Rowe said. "We got to help so many families."

Summer meals programs around the country are drastically shrinking this year because Congress did not extend Covid-19 pandemic waivers that provided school districts with much more freedom to distribute food to kids during the break.

The waivers, which were put in place in March 2020 to give needy families access to free meals when schools were closed early in the pandemic and to help schools cope with supply chain disruptions, expire on June 30. Advocates had pressed lawmakers to extend them as part of the federal government's spending bill in March, but the measure did not make it into the final legislation.

House and Senate committee leaders are working on an agreement to extend the waivers, a source close to the negotiations told CNN.

The curtailed summer meals programs come at a time when many parents are struggling to put food on the table as the cost of groceries, gas and other essentials soars.

"Families will be in a lot of pain this summer," said Jillien Meier, director of partnerships and campaign strategy at Share Our Strength's No Kid Hungry campaign. "It's ripping the security blanket these families have depended on."

The waivers greatly expanded the US Department of Agriculture's summer meals programs, which traditionally have had poor participation rates because of all the restrictions. Yet, they are a vital source of nutrition for kids whose parents can't afford to regularly buy fresh fruits and vegetables and other healthy items.

Being well fed over the summer also minimizes the learning loss many children experience when class is out.

For the last two summers, schools and community groups could provide food in more locations, not just areas with high poverty rates. Parents and children could pick up meals to take home, instead of the kids having to eat on site. And they could receive multiple days' worth of breakfast and lunch.

As a result, the number of summer meals served nearly tripled to 263 million in July 2020, according to a No Kid Hungry analysis of USDA data. Nearly 191 million meals were distributed last July.

That figure could shrink by 95 million meals this July, the analysis found. Just losing the waiver that allowed distribution in more locations could jeopardize access to food for nearly 7 million children since roughly 20% of sites could close.

Families in rural locations could be hit especially hard since many will now have to travel farther to meal sites as gas prices skyrocket. It could be cheaper for them to make their kids a peanut butter and jelly sandwich at home, Rowe said, though the children may then miss out on the fresh fruits and vegetables that school districts provide daily.

The USDA is using whatever leeway it can to help schools provide summer meals to children, said Cindy Long, administrator of the agency's Food and Nutrition Service.

It is also encouraging states to apply for the summer Pandemic-EBT program, which is available while the national public health emergency is in effect. The measure provides families that qualify for free and reduced-price meals with nearly $400 per child to help them buy food while school is out.

Eleven states have already been approved, and more are under review, Long said. However, it may take several weeks or months for the money to reach parents. Nearly all states participated in the program last summer.

Getting children to participate in summer meals programs has always been challenging -- particularly the requirement that they eat on site, which is tough for many working parents to arrange, said Susan Maffe, director of food and nutrition services for Meriden Public Schools in Connecticut, where more than three-quarters of the district's students are eligible for free or reduced-price meals during the school year.

This summer, the district is hoping to distribute 106,000 meals, though Maffe is not confident about hitting that number. Also, Meriden is operating only six locations this year, two fewer than the past two summers.

Requiring children to eat on site is major deterrent, with many Meriden parents surveyed saying their work schedules don't allow it. Others said this summer's locations are too far away, and they don't have transportation.

"More kids are going to go hungry," Maffe said, noting that it will hurt children's chances of being ready to learn in the fall. "It's another financial strain on families."

To entice kids to participate, the district created fridge magnets with a QR code that informs parents where the meal sites are. And it plans to hold events where children can pick a prize from a treasure chest or a book after a read-along. It will also conduct scavenger hunts and a backpack expo with the local fire department.

The waivers had also given school districts more flexibility when they run into supply chain disruptions, eliminating fines for not meeting federal nutritional requirements.

The Jefferson CountyPublic Schools district near Denver has had issues getting whole grain foods from its pizza vendor and biscuit maker this summer, for instance. Beth Wallace, executive director of the district's food and nutrition services, is concerned that if the problems persist, the schools could be penalized in the fall.

"We have to make choices and do the very best we can, and we always serve a nutritious meal. But it may not be in compliance with what our guidelines say because we just can't get the product," said Wallace, who is also president of the School Nutrition Association. "I don't know how much tolerance the USDA will have for not being able to meet the legislative program requirements."

Though the agency is more limited in what it can allow without the waivers, it is still trying to be creative in helping schools that are facing supply chain issues, Long said.

"Our overall philosophy is that any school district that is working hard to put healthy meals on the table and experiences challenges that are beyond their control shouldn't be worrying about the USDA coming down hard on them," she said.

For the past two summers, the Children's Hunger Alliance distributed hundreds of thousands of meals at more than 300 locations across Ohio. Realizing she would have to cut the number of sites by more than half this year, the non-profit's CEO, Judy Mobley, started looking for funding from the state and private donors.

The alliance is using a $300,000 grant from Ohio Gov. Mike DeWine as well as donations to restore some of the locations, which can operate free of USDA rules. It also hopes to continue one of eight mobile routes that had distributed breakfast and lunch at parks, libraries, apartment complexes and other places where low-income kids gathered over the summer.

Still, Mobley is very concerned that the alliance and other meal providers won't be able to reach all the children they served during the past two summers thanks to the pandemic waivers, particularly the ability to provide grab-and-go meals. Last summer, a total of 5.9 million meals were distributed in Ohio, up from 1.9 million in 2019.

"We were simply focused on how to feed kids in need. The waivers allowed us to do that," she said.