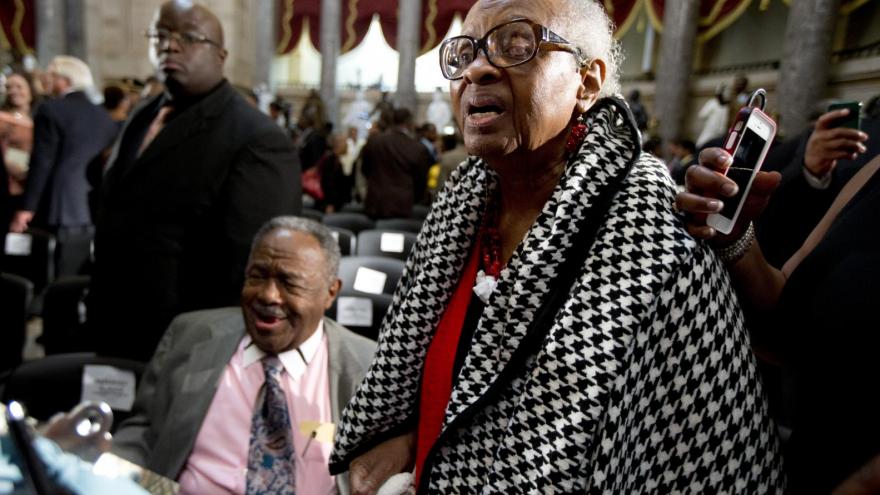 The last living parent of one of the four children killed in the terrorist bombing of an African American church in 1963, Maxine McNair, pictured here, in 2013, has died at age 93, Birmingham Mayor Randall Woodfin said.

(CNN) -- The last living parent of one of the four children killed in the terrorist bombing of an African American church in 1963 has died at 93.

McNair was the mother of Denise McNair, one of the four little girls killed at the 16th Street Baptist Church in downtown Birmingham, Alabama.

"Mrs. McNair was a matriarch of social justice in our city, an incredible wife and mother who imparted love and wisdom on hundreds of young minds while serving 33 years in the Birmingham public school system," Mayor Woodfin said in a post on Facebook.

McNair was in the church's choir loft when the bomb exploded. She jumped up to try to find her daughter, not knowing she was buried in the rubble. She wouldn't see Denise again until, at the hospital, she and her husband later identified their only child's lifeless body.

"I couldn't stop screaming for several days," McNair recalled when talking about the tragic day decades later. "They had to give me an injection to calm my nerves."

CNN previously reported that McNair was suffering from Alzheimer's in her later years.

Doug Jones, a former US senator from Alabama and the lead prosecutor in the case against two of the four Ku Klux Klan members responsible for the bombing, told CNN on Monday that McNair had cognitive issues and lost her sight several years ago.

He has been in touch with one McNair's daughters and funeral plans are pending.

'She was the rock of the family'

"In the face of unimaginable horror they (the parents) were source of inspiration" for him during run up to trial and trials, Jones said.

"She had an abiding faith in the (justice) system and fortunately it followed through," in the case of her child, he added.

"She was the rock of the family," Jones said.

McNair's other daughters, Lisa and Kimberly, spoke to CNN in 2013 on the 50th anniversary of the bombing.

They knew their sister Denise had died at their church in a bombing and that it was a significant event in history, but their parents refused to share details, the sister said. Any questions they had were given one- or two-word answers. Maybe it hurt too much to talk about the past. Their father would later say he didn't want to push it in their faces.

"Relatives said Daddy didn't cry for six months, maybe a year," said Lisa, who was born a year and four days after the bombing.

"If he did, he did it where we didn't see it," says their mother.

Kimberly, born four years after Lisa, says she was 8 when the ugly truth began to come out. They were visiting their grandmother; after someone mentioned Denise, the older woman fetched and opened a mysterious box.

It wouldn't be until their parents were interviewed by Spike Lee for his Academy Award-nominated 1997 documentary, "4 Little Girls," that the McNair sisters fully understood. Everything their parents had kept to themselves came out. As Kimberly put it, the film made Denise "three-dimensional."

The couple, who had tried to have more children ever since Denise was born, came home to silence. That they had another daughter almost exactly a year later, and then another, felt like a miracle.

Lisa and Kimberly admired their mother.

"No one would have blamed her if she'd crawled into bed and cried for the rest of her life," Lisa said in 2013. "Mama said a minister friend of hers told her, 'Maxine, God has a divine plan, and you just have to follow it.'"

The bombing in Birmingham lent new urgency to the civil rights movement. Less than a year after the bombing, President Lyndon B. Johnson would sign the Civil Rights Act, which barred discrimination based on race and segregated facilities, among other racist practices.