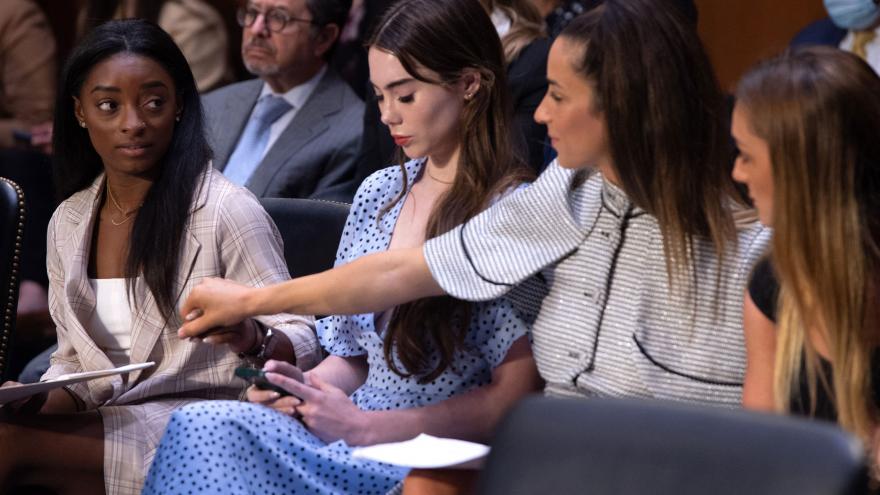 US Olympic gymnasts (L-R) Simone Biles, McKayla Maroney, Aly Raisman and Maggie Nichols arrive to testify during a Senate Judiciary hearing about the Inspector General's report on the FBI handling of the Larry Nassar investigation on September 15 in Washington, DC.

(CNN) -- USA Gymnastics, the US Olympic and Paralympic Committee and their insurers agreed to pay $380 million in a settlement with the victims of Larry Nassar, the former Olympic doctor who sexually abused girls for decades.

Judge Robyn L. Moberly of the US Bankruptcy Court in the Southern District of Indiana officially approved the settlement in court Monday.

"The plan has been overwhelmingly accepted by all parties to this bankruptcy. The court certainly finds that it's feasible," Moberly said.

The settlement is part of the USAG's plan to exit bankruptcy as the organization has struggled to recover from the Nassar scandal.

USA Gymnastics said in a statement that the settlement, which also includes non-monetary commitments focused on athlete safety and wellness, will allow it to emerge from bankruptcy by the end of 2021.

"USA Gymnastics is deeply sorry for the trauma and pain that Survivors have endured as a result of this organization's actions and inactions," USAG President and CEO Li Li Leung said in a statement. "The Plan of Reorganization that we jointly filed reflects our own accountability to the past and our commitment to the future.

"Individually and collectively, Survivors have stepped forward with bravery to advocate for enduring change in this sport. We are committed to working with them, and with the entire gymnastics community, to ensure that we continue to prioritize the safety, health, and wellness of our athletes and community above all else."

A settlement proposal of $425 million was previously submitted in August, but a modified settlement of $380 million was later agreed upon. The majority of the settlement will be paid by insurers, but the U.S. Olympic and Paralympic Committee will pay around $34.4 million and will loan around $6.1 million to USA Gymnastics to pay its portion of the settlement, court documents state.

Nassar, the longtime doctor for the USA Gymnastics team and Michigan State University, is serving a 60-year sentence in federal prison on child pornography charges. He also was sentenced to a 40-to-175 year state prison sentence in Michigan after pleading guilty to seven counts of criminal sexual conduct.

As part of a plea deal, he admitted to using his trusted medical position to assault and molest girls under the guise of medical treatment for about two decades.

At his sentencing in Michigan in 2018, more than 150 women -- including Olympic gold medalists Aly Raisman and McKayla Maroney -- publicly told the court he sexually abused them. A number of the women said that they had reported the abuse previously but that the systems of authority, including USA Gymnastics, the US Olympic and Paralympic Committee and Michigan State University, did not take their concerns seriously.

In addition, the Justice Department's inspector general released a scathing report in July saying that senior officials in the FBI Indianapolis Field Office failed to respond to the Nassar allegations with the utmost seriousness and urgency, made numerous and fundamental errors when they did respond and violated multiple FBI policies when undertaking their investigative activity.

The $380 million settlement also includes a provision to dedicate at least one seat on the USA Gymnastics Board of Directors to a survivor of Nassar's sexual abuse, according to court documents.

Additionally, at least one member of the organization's two committees dedicated to safe sports and athlete wellness will be reserved for a Nassar abuse survivor. A process to select individuals to fill these positions is still being worked on, but USA Gymnastics has committed to the provisions, the documents state.

The nonmonetary terms of the settlement also include reforms to the organization's training and practices regarding athlete safety and proper reporting of misconduct.

Rachael Denhollander, the first woman to publicly accuse Nassar of sexual abuse, tweeted Monday that she is "proud of the nonmonetary reform commitments in particular" and said she is "eager to see these changes through."

"This chapter has closed, but the real work of restoration is just beginning," Denhollander said.

"Survivors have now received a total of $880 million in compensation for their pain and suffering at the hands of this monster and the institutions who enabled him, Michigan State University, USA Gymnastics and the US Olympic and Paralympic Committee. These organizations spent more than $100 million on corporate lawyers to evade their legal and moral responsibility.

"We prevailed for one simple reason, the courage and tenacity of the survivors. These brave women relived their abuse publicly, in countless media interviews, so that not one more child will be forced to suffer physical, emotional, or sexual abuse in pursuit of their dreams."

Manly also called for the criminal prosecution of the FBI officials who failed to investigate Nassar and the Gymnastics and Olympic officials who "conspired" with them.

"We will continue to pursue justice on behalf of the hundreds of little girls and young women who were molested as a direct result of their obstruction of justice," he said.

The CEO of the US Olympic and Paralympic Committee, Sarah Hirshland, also issued a statement on the agreement.

"We are grateful to have reached a resolution with the athlete survivors. We have the deepest respect for the tremendous strength and bravery these women have shown. We recognize our role in failing to protect these athletes, and we are sorry for the profound hurt they have endured," her statement said.

"Reaching a financial resolution is one extremely important piece of the transformation that is taking place within our organization. In addition to actively participating in the mediation and contributing to the settlement, USOPC has enacted sweeping reforms to our governance structure to combat sexual abuse, support athletes and survivors and strengthen protections for athletes against any form of abuse. Our resolve to make Olympic and Paralympic sport safe for all guides everything we do. This is our pledge, today and every day," it said.