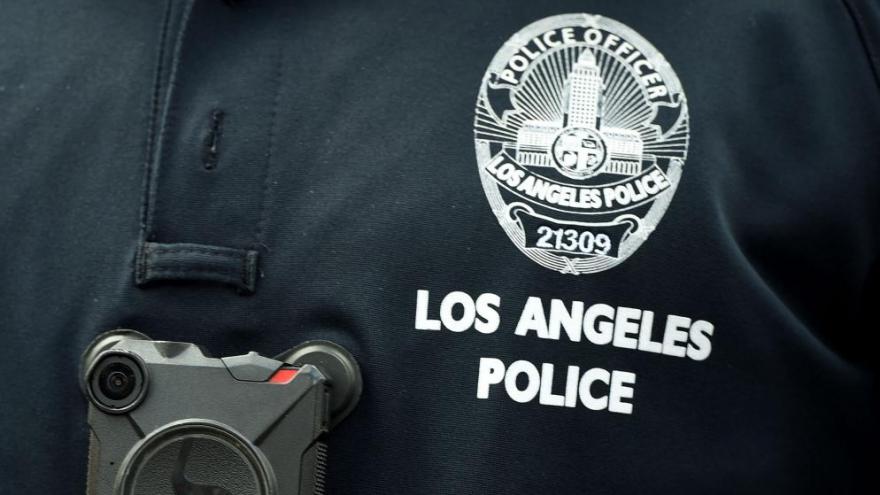 The Los Angeles Police Department is investigating whether employees were involved in sharing or creating an offensive Valentine's Day-themed image-making light of George Floyd, who was killed by a Minneapolis police officer last year.

(CNN) -- The Los Angeles Police Department is investigating whether employees were involved in sharing or creating an offensive Valentine's Day-themed image making light of George Floyd, who was killed by a Minneapolis police officer last year.

The post in question was described to CNN by an LAPD official as using an image of Floyd with the phrase "You take my breath away." Floyd died last May after repeatedly telling an officer "I can't breathe" while the officer knelt on his neck for more than eight minutes.

In a series of tweets Saturday night, the LAPD announced it was launching an internal investigation into the image, saying it has "have zero tolerance for this type of behavior."

The department said it has not identified "any actual postings in the workplace or identified that it was in fact our department employee who created the image." It was not known how the image was circulated or where it originated.

"We do not know the source of that image, whether it was on social media, in an email or seen in another form. It's unclear at this time if the image came from an original source outside the LAPD," Capt. Stacy Spell told CNN.

LAPD internal affairs officials said they were going to interview personnel Monday to learn more about the circumstances surrounding the post, including when and where the person saw it and who is responsible, the official told CNN. It is not clear if those interviews have taken place.

The Los Angeles County District Attorney's Office also announced it will review the incident to "determine if the integrity of any of our cases may have been compromised by biased police work," District Attorney George Gascón said in a statement.

"Celebrating the murder of a Black man at the hands of police demonstrates a profound absence of humanity. The mock valentine underscores the highly problematic, and frankly, racist perceptions that pervade the law enforcement culture regarding the communities we are sworn to protect and serve," Gascón said.

Floyd's family said it was furious and devastated by the news of the image's circulation and called for the immediate termination of the person responsible for it, according to attorney Ben Crump.

"The Floyd family is understandably outraged. This is beyond insult on top of injury -- it's injury on top of death. The type of callousness and cruelty within a person's soul needed to do something like this evades comprehension -- and is indicative of a much larger problem within the culture of the LAPD. We demand that everyone who was involved is held accountable for their revolting behavior and that an apology be issued to the family immediately," Crump said in a statement.

Activists also rallied outside an LAPD station on Monday to demand the firing of officers involved in sharing the message.

"Any LAPD mocking the death of George Floyd, should be terminated immediately," said Los Angeles activist Najee Ali at a press conference. "They do not deserve to wear the LAPD uniform."

The union representing LAPD officers is also calling for those involved to be held accountable.

"The Los Angeles Police Protective League repudiates this abhorrent image and anyone associated with its creation, dissemination, or passive observation of it," the union said in a statement. "If that image was created, "liked," or shared by a member of the LAPD, the Chief of Police must act swiftly to hold those individuals accountable. There must be zero tolerance for this behavior in our profession, and any police officer who feels the need to be part of any online group that engages in, promotes, and/or celebrates this type of activity should quickly rethink their career choice because they clearly don't have the judgment, nor temperament, to be a member of law enforcement."