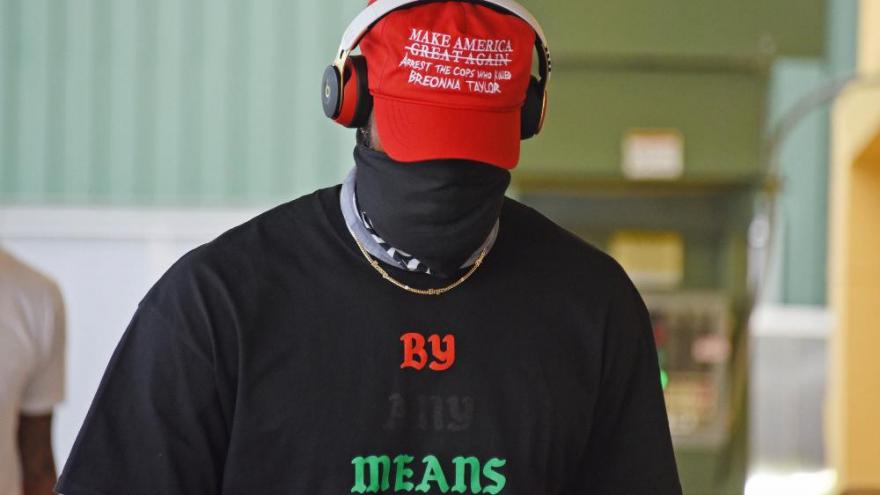 LeBron James arrives to the arena before the playoff game between the Los Angeles Lakers and Portland Trail Blazers.

(CNN) -- Their results on the basketball court ultimately weren't what they wanted, but LeBron James and other Los Angeles Lakers sent a message on Tuesday as they arrived at the arena.

Ahead of Game 1 of their first-round playoff series against the Portland Trail Blazers, players from the Lakers were seen wearing red hats, which looked like MAGA hats worn by supporters of President Donald Trump.

But the text on the hats reads: "Make America Arrest The Cops Who Killed Breonna Taylor."

Following the deaths of Taylor and George Floyd, NBA players have been vocal in their calls for social justice. When the season resumed, most players knelt during the National Anthem while wearing Black Lives Matter T-shirts.

Taylor was shot and killed by Louisville Police in her apartment during a flawed forced-entry raid in the early morning hours of March 13. None of the officers involved has been charged with a crime.

The office of the Kentucky Attorney General is investigating the incident.

Following Tuesday's game, James wore the hat while speaking to reporters about it.

"It's just something that we continue to put our foot on the gas, continue to pressure," James said. "The situation that's going on in Louisville, Kentucky, an innocent woman being killed, by the name of Breonna Taylor, a woman who had a bright future, and her life was taken away from her. There have been no arrests. There's been no justice -- not only for her but for her family. We want to continue to shed light on that situation. It's just unjust."

The Lakers are the top seed in the Western Conference for the NBA playoffs, but they're in early trouble in the first round in the bubble in Orlando, Florida. On Tuesday night, the eighth-seeded Blazers -- who led by as many as 16 points -- defeated the Lakers 100-93 to take a 1-0 lead in the series.

Earlier Tuesday, the top seed in the Eastern Conference, the Milwaukee Bucks, lost to the Orlando Magic 122-110 in the first game of their first-round series.