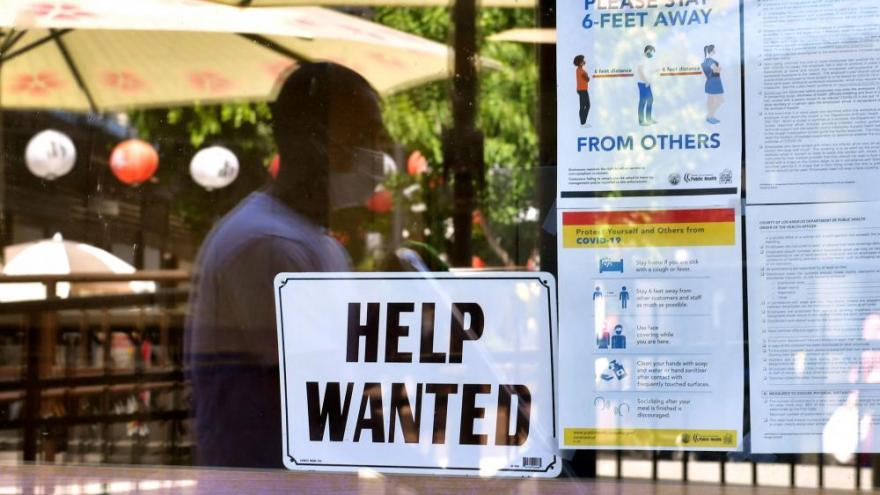 A 'Help Wanted' sign is posted beside Coronavirus safety guidelines in front of a restaurant in Los Angeles, California on May 28.

(CNN) -- Sugarbush Resort in Vermont is preparing for a busy winter season, but looming over the effort to host hundreds of guests is the need to ramp up hiring -- both domestic and foreign.

Coming out of the winter months, employers prepared for staff to return and gear up for the busy summer season, as tourists headed to beach towns, amusement parks and resorts after a devastating year. Instead, some workers opted not to return, bringing the labor shortage across the US into clear focus.

"There's a newer sense of urgency about this," said Neil Bradley, executive vice president and chief policy officer and head of strategic advocacy at the US Chamber of Commerce. "It was a problem pre-pandemic. It's a crisis now that we're coming out of the pandemic."

In recent weeks, Sugarbush announced raising the minimum wage and expanding benefits to attract American workers. Even so, the resort will still have to supplement its workforce with people from overseas, a process that's been bogged down by backlogs resulting from the coronavirus pandemic and increasing demand.

"One of the struggles right now is this whole process is crawling a little bit more either because embassies are shut down or limited hours, limited staffing," said John Bleh, public relations and communications manager at Sugarbush. "This whole process has been backed up."

The process for employers to obtain visas to bring in workers from abroad is already long and cumbersome and requires extensive planning. For one, there's a limited number of temporary worker visas split between seasons -- spring and summer, and fall and winter -- and it can be pricey.

The arduous process, met with increased demand for foreign workers, is posing a challenge for employers seeking to bolster their workforce.

"Our immigration system is so outdated and so unresponsive to the needs of the 21st century, it's literally doing economic damage to our country," said Charles Kuck, an immigration attorney based in Atlanta who has been fielding numerous calls from employers trying to obtain guest-worker visas. "I think employers are realizing, 'I'm not going to get these people back.'"

Ski resorts have relied on foreign workers before. In December 2019, a survey of 137 ski areas revealed that nearly 52% of those areas used some sort of foreign labor, according to the National Ski Areas Association. The most common visas were J-1s, which provide short-term visas to students, for example, and H-2Bs for temporary nonagricultural workers.

But this year, slow processing and possible vaccine requirements are making obtaining those visas more difficult.

"It's an enormous challenge for us, given the fluidity of the Covid situation and vaccine situation," said Dave Byrd, director of risk and regulatory affairs at the National Ski Areas Association.

Ski resorts have been trying to staff up with American workers but are running into hurdles, like housing costs exacerbated by the pandemic, demand for labor and rising wages, Byrd added.

The H-2B visa allows employers to bring foreign workers to the United States for temporary non-agricultural jobs, such as landscaping, hospitality and other industries. Congress sets a cap for the number of visas allowed per fiscal year. Currently, that cap stands at 66,000, with 33,000 for workers starting employment October 1 to March 31, and 33,000 for those employed April 1 to September 30.

"It's a race for those 33,000 visas," said Jeff Joseph, an immigration attorney based in Colorado.

"More employers are filing than in the past and that's directly related to unemployment. Where they may have found more workers in the past, there's a struggle," he added, noting that obtaining a visa is an extensive process and not an easy or simple alternative for those seeking employees.

"The H-2B program is designed to help U.S. employers fill temporary seasonal jobs, while safeguarding the livelihoods of American workers," said Secretary of Homeland Security Alejandro Mayorkas in a statement at the time. American businesses that rely on the program during the summer months expressed a need for more temporary guest workers, according to DHS.

The scramble for workers extends to a host of industries, like the construction sector, which lost more than a million workers when the industry shut down temporarily during the pandemic. While the industry has since recouped an overwhelming part of its workforce, it was still below pre-pandemic levels as of June.

Businesses across the board are taking steps to attract more workers. Companies such as Under Armour, Amazon and Walmart have raised their minimum wage -- and smaller businesses are also offering incentives.

That's the hope for Sugarbush, which is rolling out its own set of incentives as it prepares for busy winter months ahead.

"We've had trouble hiring people and we feel this is hopefully a good way to get people into the workforce for us," Bleh said.