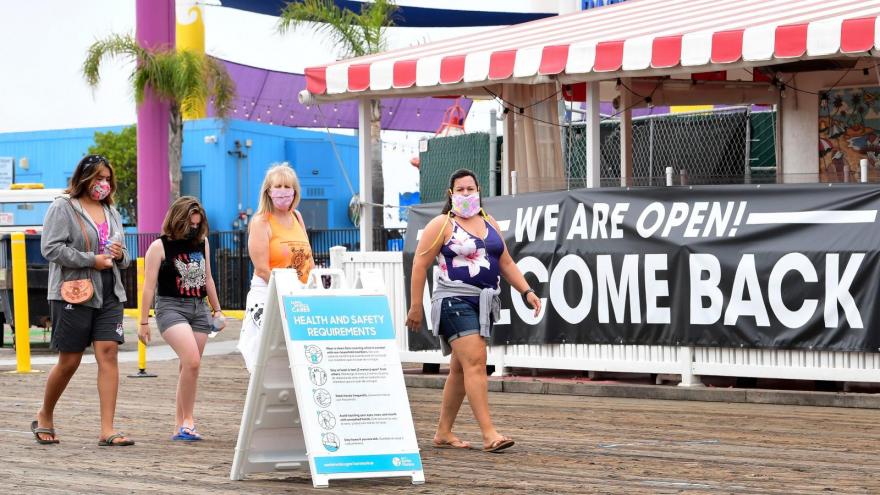 People wearing facemasks walk past a health and safety guideline board and an open restaurant on Santa Monica Pier which re-opened on June 25 after closure for over three months due to the coronavirus pandemic, on June 26, 2020 in Santa Monica, California.

(CNN) -- Californians living in several key Golden State cities could incur hundreds of dollars in fines if they venture out in public without masks.

"Our last option was to conduct enforcement by issuing an Administrative Citation, but the risk to Community health is too great," said Captain Edward Ramirez of the Los Angeles Sheriff's Department's West Hollywood Station.

In Santa Monica, residents could be fined $100 if they don't wear a mask or comply with social distancing (or keeping at least six feet of distance from others). Second and third violations would result in $250 and $500 fines respectively, and businesses that break the mask or social distancing mandates could receive up to $1,000 in fines.

"Face coverings are essential," Santa Monica's Interim City Manager Lane Dilg said in a statement. "I encourage everyone to try different styles to find what works for you. But it is a critical time to save lives by wearing face coverings whenever we are outside of our homes and not gathering with people outside of our households."

Beverly Hills was the first to issue the mask mandate in April, ahead of Gov. Newsom's mandate. In mid-June, Newsom made it mandatory for Californians to wear a mask in indoor public spaces, healthcare facilities and other areas where social distancing isn't possible, like on public transit.

Requiring face masks hasn't gone over well in every part of the state. Orange County in southern California revised its guidance on masks in June after the former county health officer was threatened with violence for mandating masks. The health officer eventually resigned, and masks are "strongly recommended."

But now that coronavirus cases are surging in more than half of US states after they reopened, politicians are changing their tune on masks. In Texas, Gov. Greg Abbott this week signed an order requiring residents of counties with 20 or more Covid-19 cases to wear masks with limited exceptions. Georgia Gov. Brian Kemp, who fanned controversy when he announced the state would reopen in late April, encouraged residents to wear masks and social distance, though he's stopped short of requiring it by law.

Even officials in the Trump administration, which has been at times incredulous of the efficacy of masks, have shown muted support for face coverings, even if they've stopped short of wearing masks themselves. Vice President Mike Pence, in an appearance this week with Abbott, said "wearing a mask is a good idea," and President Donald Trump even said he'd have "no problem" wearing a mask in certain situations -- a soft pivot from his months-long refusal to wear masks in public -- though he said he still thinks the coronavirus will "disappear."