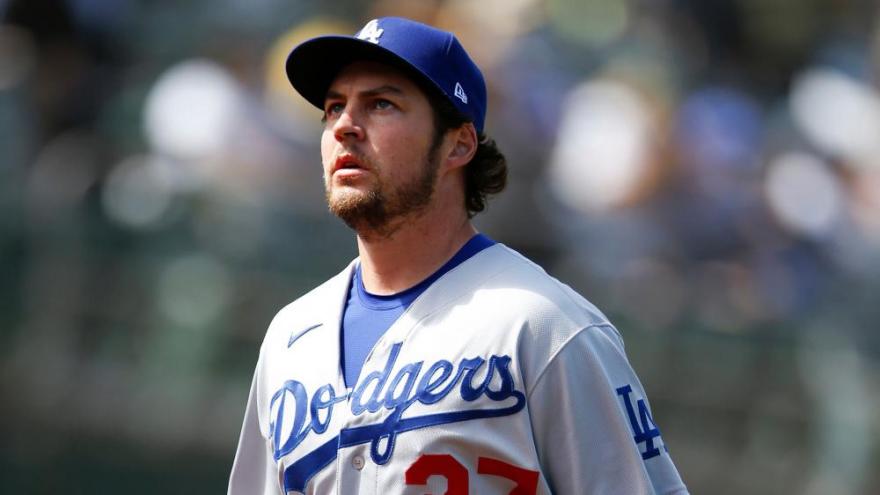 The Pasadena Police Department is investigating pitcher Trevor Bauer over assaulting a woman earlier this year.

MLB says a league investigation is running concurrent with that of the police. The Cy Young Award winner was scheduled to start Sunday's game versus the Washington Nationals.

Bauer's co-agents, Jon Fetterolf and Rachel Luba, issued a statement Friday saying Bauer will not appeal the MLB decision and that they "refute [the woman's] allegations in the strongest possible terms."

The woman who made the allegations against Bauer has filed a request for a domestic violence restraining order that includes graphic details, including photos as well as messages between the two.

The 27-year-old woman, who her attorney said prefers to be identified as "Ms. Hill," said in the document, filed in the County of Los Angeles Superior Court and dated Tuesday, that while she had consented to sex with Bauer on two occasions, she alleges Bauer did things to her that she did not agree or consent to during both encounters. She alleged this included sticking his fingers down her throat, choking her until she was unconscious, punching her in the face and punching her vagina.

"As the shock has worn off, I recognize the seriousness of the sexual assault I endured," the woman said in her written statement. "I do not want Trevor to put anyone else through what I suffered."

The Pasadena Police Department is looking into the allegation, a spokesman with the department told CNN on Tuesday.

A temporary restraining order was granted, and a hearing has been scheduled for July 23 to determine if there will be a finding of domestic violence and a permanent restraining order, the woman's attorney, Marc Garelick, told CNN.

Fetterolf and Luba said Friday, "Mr. Bauer will not appeal MLB's decision to place him on administrative leave at this time in an effort to minimize any distraction to the Dodgers organization and to his teammates. Of note, administrative leave is neither a disciplinary action nor does it in any way reflect a finding in the league's investigation."

On Wednesday, his representation denied the allegations and told CNN that temporary restraining orders do not require corroboration and they plan to defend the player against the allegations at the upcoming hearing. They declined to comment further.

In a Tuesday statement, Fetterolf said: "Mr. Bauer had a brief and wholly consensual sexual relationship initiated by Ms. Hill beginning in April 2021. We have messages that show Ms. Hill repeatedly asking for 'rough' sexual encounters involving requests to be 'choked out' and slapped in the face. In both of their encounters, Ms. Hill drove from San Diego to Mr. Bauer's residence in Pasadena, Calif. where she went on to dictate what she wanted from him sexually and he did what was asked. Following each of her only two meetings with Mr. Bauer, Ms. Hill spent the night and left without incident, continuing to message Mr. Bauer with friendly and flirtatious banter. In the days following their second and final encounter, Ms. Hill shared photos of herself and indicated that she had sought medical care for a concussion. Mr. Bauer responded with concern and confusion, and Ms. Hill was neither angry nor accusatory.

"Mr. Bauer and Ms. Hill have not corresponded in over a month and have not seen each other in over six weeks. Her basis for filing a protection order is nonexistent, fraudulent, and deliberately omits key facts, information, and her own relevant communications. Any allegations that the pair's encounters were not 100% consensual are baseless, defamatory, and will be refuted to the fullest extent of the law."

The league's decision was announced Friday in a press release which reads: "MLB's investigation into the allegations made against Trevor Bauer is ongoing. While no determination in the case has been made, we have made the decision to place Mr. Bauer on seven-day administrative leave effective immediately. MLB continues to collect information in our ongoing investigation concurrent with the Pasadena Police Department's active criminal investigation. We will comment further at the appropriate time."

The Dodgers issued this statement on Tuesday: "The Dodgers were made aware of the allegations against Trevor Bauer late this afternoon and immediately contacted Major League Baseball, which will be handling this matter. The Dodgers take any allegations of this nature very seriously, but will have no further comment at this time."

A 10-year major league veteran, he pitched for the Arizona Diamondbacks, the Cleveland Indians and the Cincinnati Reds before joining the Dodgers in 2021.

Bauer didn't join the Dodgers during a Friday visit to the White House, where they were welcomed by President Joe Biden and Vice President Kamala Harris.

The Dodgers told CNN on Thursday that "Only players/coaches/staff/executives from the 2020 World Championship team will be at tomorrow's event."

Woman says she was unconscious after being choked

According to her temporary restraining order request, the woman said she and Bauer met through Instagram in April. She said that on April 21, she drove from San Diego to Los Angeles to meet Bauer at his house. After midnight, she said she consented to having sex with Bauer and that she said it was OK to be "a little rough."

She said in her statement that Bauer asked if she had been choked before during sex. She said responded yes, "meaning that putting his hands around my neck and applying light pressure." She alleges Bauer then put his fingers down her throat "in an aggressive manner," and he stopped when she asked.

The next morning, she alleges Bauer "laughed and said to me in a joking manner, 'You feeling a little sore this morning?'"

The woman said the two continued to communicate for the next three weeks using Instagram and text messaging.

The woman said she went to Bauer's house again, arriving just after midnight on May 16. She said they would go on to have sex.

This time with Bauer, she said, he asked her to agree to a safe word. She said he also asked what was off-limits, and she answered not to put fingers in her throat.

She alleges in the document that about five minutes into sex, he choked her to unconsciousness and she awoke "extremely disoriented."

She alleges Bauer rolled her onto her back, and he resumed having sex and began punching her face several times. Then, she alleges in her petition, Bauer flipped her onto her stomach and began choking her with hair, and she said she lost consciousness again. She alleges he also repeatedly punched her vagina.

She alleges Bauer repeatedly said, "You're safe, I'm here. You're safe," as well as saying, "I would never do those things to you if it wasn't sexually."

She said she left later that morning.

The woman said during the day she threw up and had severe headaches and checked herself in at an emergency room at Alvarado Hospital Medical Center.

The woman said two San Diego Police Department officers came to speak with her, and she said at the time she "attempted to downplay what occurred out of concern for my privacy and what my statements might lead to."

She said she later gave a statement to two Pasadena Police Department officers.

The woman wrote in her petition that she has waited to bring this request for a domestic violence restraining order "to see how the criminal investigation would proceed."

She said in the document: "One of the last text messages I sent him was, 'I appreciate all of your offers to help, but the best way you can help me is to never do that to anyone else ever again.' To this, Trevor responded, 'I would never do anything to hurt anyone. That includes you.'"