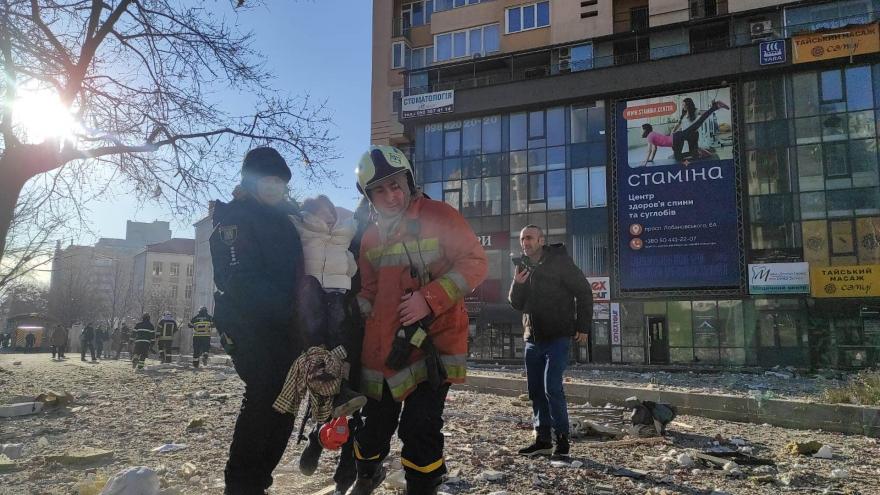 (CNN) -- Two large explosions lit up the night sky to the southwest of Kyiv early Sunday morning with one detonation that appeared to be approximately 20 kilometers from the city center.

The explosions come after Ukraine's outgunned forces held the capital for the third day on Saturday as battles continued across the country, while a defiant Ukrainian President Volodymyr Zelensky told citizens to defend the country.

A blast lit up the skyline on Saturday night in the strategic maritime city of Mykolaiv in southern Ukraine as heavy shelling reverberated around its outskirts.

The sound of small arms fire and the impact of multiple rockets punctuated the night following a day of heightened tension in the city. A CNN crew saw Ukrainian troops fire warning shots and throw suspected Russian saboteurs from their cars to the ground.

After unconfirmed reports of Russian paratroopers landing in the city's northern areas, a bridge was raised for the first time in years in a bid to cut a main connection between the north and south of the city -- which sits on an inlet from the Black Sea.

As Russia's war of aggression moves to the streets of multiple Ukrainian cities, with Ukraine's outnumbered military continuing to hold back the invading forces in multiple locations, the Russian Ministry of Defense said its troops have been ordered to resume their offensive "in all directions."

Ukraine's prime minister announced the country was closing its borders with Russia and Belarus beginning Monday, and only Ukrainian citizens would be able to cross into Ukraine from those two countries.

A senior US defense official warned Saturday that more than half of Russian President Vladimir Putin's assembled power was "now committed inside Ukraine."

Heavy fighting was ongoing in the northern city of Kharkiv, which is close to the Russian border, while there was "less resistance in the south," a US official said.

In Vasilkiv, a town some 35 kilometers south of Kyiv, the mayor said Saturday morning that fierce fighting was taking place in the middle of the town.

Vasilkiv Mayor Natalia Balasynovich said there were losses on the Ukrainian side with "many wounded, unfortunately, they are in the 200s," she told the Ukrainian parliament channel Saturday.

But Russia's invasion has not progressed as fast as Moscow would have expected, say Western intelligence officials.

Britain's Ministry of Defense said Russia has yet to gain control of Ukrainian airspace "greatly reducing the effectiveness of the Russian Air Force."

Russia has also faced "acute logistical difficulties and strong Ukrainian resistance," slowing the speed of the Russian advance, the UK ministry said in a Saturday intelligence update shared on Twitter.

But it stressed that the bulk of Russian forces are now only 18.6 miles from the center of Kyiv, warning that casualties are "likely to be heavy and greater than anticipated or acknowledged by the Kremlin."

Despite being a prime target in the invasion, Zelensky turned down a US offer of evacuation, the Ukraine Embassy in Britain said Saturday on Twitter.

"The fight is here; I need ammunition, not a ride," Zelensky told the US, according to the embassy.

Zelensky echoed the resolve of many Ukrainians -- some of whom have taken arms -- in a video message Saturday afternoon. "We have withstood and successfully repelled enemy attacks. Fighting continues in different cities and regions of our country," he said.

"Each Ukrainian should keep one thing in mind: if you can stop and destroy the occupiers -- do it. Everyone who can come back to Ukraine -- come back to defend Ukraine," he said.

Kyiv's mayor, Vitali Klitschko, braced for a further night of fighting, imposing a curfew on the city, from 5 p.m. local (10 a.m. ET) to 8 a.m., beginning Saturday evening. He warned that civilians on the street after curfew will be considered "members of the enemy's sabotage and reconnaissance groups."

The resistance to Russia's invasion has seen civilians prepare to defend their capital in recent days, with officials arming reservists with 18,000 guns and ammunition in Kyiv alone and Ukrainian TV broadcasting instructions for making Molotov cocktails.

In the northern city of Bakhmach, Ukrainian citizens attempted to stop Russian tanks by standing in front of them, according to videos seen by CNN.

A Russian thermobaric multiple rockets launcher has been spotted by a CNN team south of Belgorod, Russia, near the Ukrainian border early Saturday afternoon.

The TOS-1 or TOS-1A Multiple Rocket Launcher seen by CNN is capable of launching rockets with thermobaric warheads. There is no evidence that thermobaric weapons have been used in the conflict in Ukraine.

These types of weapons do not use conventional ammunition. Instead, they are filled with high-temperature, high-pressure explosive. They are sometimes called "vacuum bombs" because they suck in the oxygen from the surrounding air to generate a powerful explosion and a large pressure wave that can have enormous destructive effects.

Early Saturday, a large residential apartment block in the west of Kyiv was struck by a missile or rocket, as residents across the city were forced to seek shelter after a terrifying night of fighting.

Images and video from the scene showed a large impact some ten floors up in the building, with the cause of the strike unclear and the extent of casualties unknown. Several apartment units were blown out entirely, their outer walls and windows missing, leaving a gaping hole visible in the building's side, as residents were evacuated

Ukrainian troops are fighting against a significantly more advanced military power. Russian defense spending is roughly ten times that of Kyiv's and its armed forces stand at some 900,000 active personnel and 2 million in reserve, versus Ukraine's 196,000 and 900,000 reservists.

The Russian Defense Ministry has not reported a single combat casualty from the invasion, a CNN review of their news releases shows. But Zelensky has claimed that the country's forces have killed "hundreds" of Russian soldiers, without providing an exact figure. On Friday morning, British Defense Secretary Ben Wallace said Russia had lost more than 450 personnel.

Ukrainian officials have acknowledged casualties on their side.

CNN has been unable to independently verify casualty figures.

There have been suggestions of efforts toward diplomacy to stop the bloodshed, with Zelensky's senior adviser, Myhailo Podoliak, on Saturday morning saying Ukraine would set conditions in any process, noting he didn't think the country had "weak positions."

A separate spokesperson for Zelensky, Sergii Nykyforov, late Friday said that Ukraine "has been and remains ready to talk about a ceasefire and peace."

Zelensky spokesperson Nykyforov had previously denied any "claims that we have refused to negotiate."

"The sooner negotiations begin, the better the chances of resuming normal life," he said.

Western officials have been examining whether Zelensky could form a government in exile if he were to flee Kyiv, US officials told CNN. But those officials and a source close to Zelensky said the Ukrainian president has rebuffed those offers.

The Russian Ministry of Defense in a statement Saturday, claimed to have taken control over the city of Melitopol in southeastern Ukraine. This comes after a massive explosion at Melitopol Airport was captured in footage shared on social media.

There have been reports of apartment buildings and kindergartens being shelled, civilians being killed, and rockets being found in residential streets since the beginning of the invasion earlier this week.

Images analyzed by CNN confirmed that on several occasions densely populated areas have been hit by Russian forces around the country.

Russia's invasion has been followed by sweeping sanctions by Western nations, designed to damage Russia's economy and turn Putin into an international "pariah."

Saturday saw momentum in Europe to cutting Russia off from SWIFT -- a high security messaging network that connects thousands of financial institutions around the world -- with Italy and Hungary signaling their support. Germany said it would support some form of restricting Russia from SWIFT following days of debate among European Union nations. US President Joe Biden is also seriously weighing whether to publicly support expelling Russia from SWIFT, but has yet to make a final decision, multiple people familiar with his thinking tell CNN.

The decision to trigger the action has always been contingent on sign-off by the EU, which had been split for weeks over the action, and ultimately chose not to go forward this week.

Russia's decision to invade Ukraine has seen its allies like China struggle to balance its close strategic partnership with Moscow with its seemingly contradictory policy of supporting state sovereignty.

China, which has declined to criticize Russia's attack, abstained on voting for a United Nations Security Council resolution condemning Russia's invasion of Ukraine.

While the previous two nights in Kyiv were marked by the sounds of sporadic explosions coming from further away, Friday night in the capital was different for the residents who remained, with bursts of small arms fire and visible orange lines of fire going up into the sky.

Streets around the city center were also empty, with many who remained spending the night in subway stations and underground garages, seeking safe haven.

One Kyiv resident who gave her name as Olga said she had her young son Vadim, a kindergartener, sleeping in the bathroom.

"We are not going to the shelter, it does not guarantee 100% safety, and it can affect the psychology of a child. At home, he sleeps well, eats and thinks it's all fun," she said.

An unknown number of Kyiv's residents had already left the capital by Friday, leaving quiet the roads heading west of the capital that had been busy on Thursday. Refugees have been pouring into neighboring European countries in recent days, with international leaders warning of a humanitarian crisis.

Kelly Clements, the deputy high commissioner of the UN's refugee agency, told CNN more than 120,000 Ukrainians have fled Ukraine while 850,000 are internally displaced. Up to 4 million Ukrainians could flee if things continued to deteriorate, she said.

As the situkottation worsened, the international community has sought to find ways to stand with Ukraine without actively deploying troops to the country -- a move that both the United States and NATO have said they will not take.

In the late hours of Friday evening in Washington, the White House announced that Biden had approved the release of up to $350 million in immediate support to Ukraine's security and defense.

This release, announced in a memo from the White House, comes after a 40-minute call between Biden and Zelensky earlier Friday, during which they discussed "concrete defense assistance."