Kourtney Kardashian arrives in Italy... to get married? 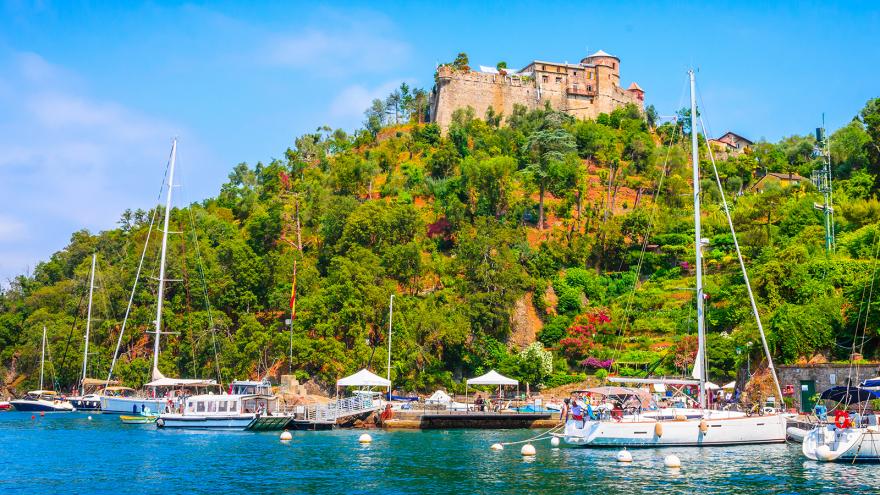 (CNN) -- Many a time has a vacation in the sun led to a destination wedding and it seems that Kourtney Kardashian and Travis Barker are no different from the rest of us.

The pair spent much of summer 2021 in Italy living la dolce vita, as they drifted around on a yacht in Liguria, took in a fashion show in Venice, and packed in plenty of PDA in between, which were swiftly posted to Instagram.

And it seems that their time in Portofino -- during which Kourtney took to her Instagram Stories to give her followers travel tips -- made a real impression on them, as the pair are rumored to be returning to get married. Possibly this weekend, to be precise.

The couple -- along with friends and family -- have been spotted today back in Portofino, with TMZ reporting that they will be married this weekend at Castello Brown, the castle which launched a thousand postcards, perched on a bluff above town.

Representatives for Castello Brown did not respond to a request for comment, though a person answering their phone line admitted that the castle, which is normally open to visitors, was closed this weekend "for a private event."

A spokesperson for Kardashian did not respond to a request for comment.

The couple were legally married several days ago, ahead of their destination wedding. They had previously staged a fake wedding in Las Vegas.

The castle -- which is an integral part of the Portofino skyline -- bills itself as a "unique location," and is available to hire out for events, as well as offering daytime visits to the public. It is thought that the site has been fortified since Roman times, though the modern-day Castello Brown is a 19th-century renovation by former British consulate Montague Yeats-Brown.

Yeats-Brown bought the castle in 1867, after it had been abandoned for more than half a century, following the fall of the Republic of Genoa. He turned it into a lavish villa, fit for a celebrity wedding, and transformed the former artillery entrenchments into a lush garden.

Today, weddings, civil ceremonies and conferences are held in the garden, overlooking the port and village below.

Portofino has long been beloved by foreigners seeking some dolce vita -- in fact, the whole region of Liguria was a stop on the Grand Tour, with many northern Europeans, and especially Brits (including Mary Shelley), setting up home on the coast.

Since the 1950s, it's been a Hollywood hotspot, and stars still flock to the village, often to rent yachts and stay offshore. Last summer, a newly reunited Jennifer Lopez and Ben Affleck came ashore for the day.

Today, the streets of what used to be a simple fishing village are filled with designer shops and celebrities spilling out of them. Kardashian herself is a frequent visitor, having recently posted throwback pictures of trips in 2019 and 2016.

Italy is, of course, one of the go-to spots for stars wanting a destination wedding. The Clooneys picked Venice, while Justin Timberlake and Jessica Biel went south to Puglia for their wedding. Tom Cruise and Katie Holmes married in Lazio, while Kourtney's sister Kim married Kanye West in Florence in 2014.

The Kardashian-Barker wedding, if confirmed, won't be the first high profile nuptials to be held in Portofino -- and the couple will be pleased to hear that Ligurian celebrity weddings seem to last.

And Wayne and Coleen Rooney -- currently at the center of the UK's compulsive "Wagatha Christie" libel trial -- married nearby in Santa Margherita Ligure, in 2008.