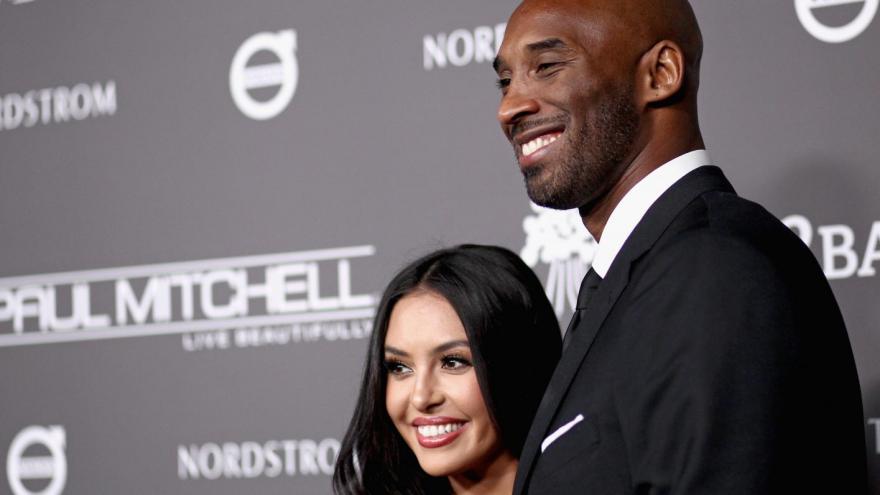 (CNN) -- Vanessa Bryant is suing the Los Angeles County Sheriff's Department and Sheriff Alex Villanueva for a photo leak of the helicopter crash that killed her husband, NBA legend Kobe Bryant, their daughter Gianna, and seven others in January.

The sheriff's department said it does not comment on pending litigation.

The day of the crash, family members gathered at the Lost Hills Sheriff's Station where the sheriff assured them the crash site was secured. However, a leak from the department, according to the lawsuit obtained by CNN, led to TMZ breaking the news and fans flocked to the site.

"But the biggest threat to the sanctity of the victims' remains proved to be the Sheriff's department itself," as eight deputies "pulled out their personal cell phones and snapped photos of the dead children, parents, and coaches. The deputies took these photos for their own personal gratification," the lawsuit states.

Lawyers for Bryant said the photos were shared in settings irrelevant to the investigation, including at a bar. A bartender overheard a trainee deputy use his photo to brag and try to impress a woman and the bartender filed a written complaint with the sheriff's department, the lawsuit states.

The lawsuit states that Vanessa Bryant learned of the photo leak from a February Los Angeles Times article. She then requested information from the department about its investigation and details on what it had done to ensure all the photos of the crash site were secured.

According to the lawsuit, a month after she requested information, an attorney for the sheriff's department responded that the department had no legal obligation to respond to her questions and would not do so.

"To date, the Department has not provided a single piece of substantive information in response to Mrs. Bryant's private requests," the lawsuit states.

In March, the sheriff said the department was investigating accusations that the deputies shared pictures of the crash scene with people outside of the crash investigation and eight deputies were facing administrative action. All photos of the crash that were in the possession of those deputies have been deleted, Villanueva said.

The lawsuit calls the department's investigation a cover-up and says that the sheriff directed deputies to delete the photos to avoid discipline and to destroy evidence of their misconduct.

Besides the stress of losing her husband and daughter, the claim says Bryant is sickened by the thought of strangers looking at the photos. She also dreads the thought that her children might stumble upon the pictures online, it said.

In a separate lawsuit, Vanessa Bryant added another company, OC Helicopters, to her wrongful death lawsuit for the crash, according to court papers obtained by CNN.

Island Express and the pilot, Ara Zobayan, were named in Bryant's original complaint filed earlier this year. However, in the latest filing, lawyers for Bryant say OC Helicopters owner Richard Webb regularly discussed weather and routes with Island Express pilots before and during flights.

On that January morning, "Webb suggested the route for this subject fatal flight to Island Express pilot Ara George Zobayan. Webb personally checked and monitored weather conditions on the hour every hour and told Zobayan that based on the weather reports, the subject fatal flight was doable and was a good flight plan," said the lawsuit. Webb continued to text the pilot and sent him a final text about the weather 20 minutes after the crash.

When Bryant went to John Wayne-Orange County Airport to fly to the Calabasas crash site, Webb said she could not take off due to weather, according to court documents.

Among other failures, OC Helicopters did not assess weather, obtain proper weather data before and during the flight, or recommend a safe route and flight plan.

"Defendant OC Helicopters improperly failed to tell the Island Express pilot Ara George Zobayan to abort or cancel the flight or turn around when its agent and employee Richard Webb was in communications with Defendant Zobayan and monitoring the weather during the flight," according to the claim.

The suit accuses the helicopter companies and pilot of dozens of counts of negligence ranging from providing safe aircraft services, proper training, to causing or authorizing the operation in a reckless manner.

In June, the NTSB said weather and visibility were critical to the accident as that fateful morning in January was foggy by California standards.

A woman who answered the phone at OC Helicopters said the company is not commenting at this time.

On its website, OC Helicopters describes itself as a private helicopter tour company "which brings the excitement of helicopter tours and charters to everyone."