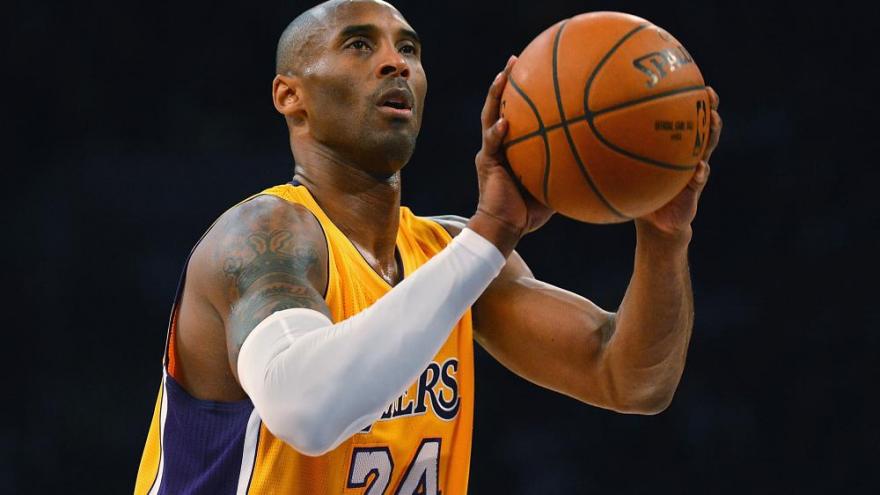 Kobe Bryant #24 of the Los Angeles Lakers shoots a free throw during a game against the Sacramento Kings at Staples Center on December 9, 2014 in Los Angeles, California.

(CNN) -- Kobe Bryant's family is requesting privacy following the death of the NBA star and his daughter, saying inaccurate reports are only adding to the pain for his grieving loved ones.

Bryant, his daughter, Gianna, and seven others died in a helicopter crash in Calabasas, California.

Gianna, 13, her teammates and their parents, their basketball coach and the pilot were headed to a game Sunday when the helicopter crashed into a hillside and killed all nine people aboard.

The "unnamed sources and blind quotes" cited by the media following their deaths are not coming from the family, Molly Carter, president of Kobe Inc., said in a statement delivered to news outlets.

"To this point, no one has been authorized to speak on behalf of the family regarding any personal details surrounding Sunday's tragedy, including stories related to the family's previous air travel decisions," Carter said. "We ask members of the media for respect and responsible judgment during this difficult time. These inaccurate reports only add unnecessary pain to a grieving family."

Bryant's widow, Vanessa Bryant, made her first public statement on the loss of her husband and daughter on her Instagram Wednesday.

"My girls and I want to thank the millions of people who've shown support and love during this horrific time," she wrote. "Thank you for all the prayers. We definitely need them."

The Los Angeles Lakers -- Bryant's team in his entire 20-year NBA career -- will play at the Staples Center on Friday in the first game since his death.

The team will hold a tribute to Bryant at the game, Coach Frank Vogel told CNN.

Among the Lakers mourning Bryant and his daughter is Lakers Vice President Rob Pelinka, who was Bryant's agent during much of the star's playing career. He said the loss of his "best friend" and "sweet goddaughter" was an "amputation of part of my soul."

"He was, simply put, the most inspirational athlete of our time. What the world may not know is that he was also the best friend anyone could ever imagine," Pelinka said in a statement. "Everything Gigi stood for, I am so proud of."

The Los Angeles Clippers played the first game in Bryant's home court since his passing. A tribute video posted by the team called Bryant "as synonymous with Southern California as the sunshine."

The nine lives lost left "a gaping hole in the heart of Los Angeles," the video said.

Helicopter did not have 3 recommended features

The aircraft did not have a terrain awareness and warning system (TAWS), the National Transportation Safety Board said. It also lacked a cockpit voice recorder and a flight data recorder.

TAWS is a safety feature that alerts pilots when they might hit land. The recorders can help authorities investigate a wreck.

The helicopter flew in foggy conditions, and investigators are trying to determine the cause and whether the pilot should have been granted the permission to fly in the weather.

Timeline: Here's what happened in the minutes before crash

It is not clear if the missing equipment would have prevented the crash, but a California congressman introduced a bill Thursday requiring the Federal Aviation Administration to have all helicopters equipped with TAWS.

The legislation, named The Kobe Bryant and Gianna Bryant Helicopter Safety Act, "will also establish a commission on helicopter safety and require a report to Congress on best practices for helicopters in cases of low visibility," US Rep. Brad Sherman said in a statement.

The bodies of all nine victims of the crash have been positively identified.

The Los Angeles County Department of Medical Examiner-Coroner announced Wednesday that it has confirmed, following "round-the-clock testing and analysis of DNA," that Gianna Bryant, 13; Payton Chester, 13; Alyssa Altobelli, 14; Keri Altobelli, 46; and Christina Mauser, 38, were killed in the crash.

The medical examiner had previously confirmed the identities of Bryant, 41; John Altobelli, 56; Sarah Chester, 45; and the pilot, Ara Zobayan, 50; through their fingerprints.

The group had been on the way to a basketball game when the helicopter carrying them crashed into a hillside. There were no survivors. The teenagers were teammates on a basketball team coached by Bryant and Mauser.