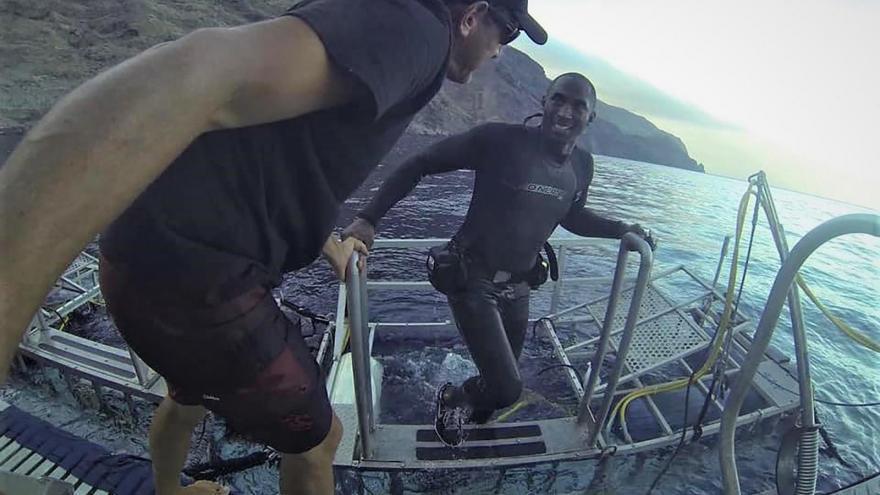 Kobe Bryant and Martin Graf in September of 2013. Bryant had to wear a pair of his Nikes to dive with the sharks.

(CNN) -- Shark experts have named a great white after basketball legend Kobe Bryant, who was apparently fascinated with the fearsome creatures.

The 12-foot-long shark was spotted in the Pacific Ocean near Guadalupe Island, Mexico, which is a gathering spot for white sharks, according to Michael Domeier with the Marine Conservation Science Institute.

The shark is a young adult and is new to the area, he said.

"I lived in Southern California during Kobe Bryant's entire career as a Laker, so I could personally feel the shock of his sudden death despite the fact I was thousands of miles away in Patagonia," Domeier told CNN in an email.

Bryant died last month in a helicopter crash that also killed his daughter, Gianna, and seven others.

The Marine Conservation Science Institute (MCSI) maintains a photo-ID database of the sharks that migrate to the waters around Guadalupe Island each year. Researchers can use the photos to identify sharks by their distinctive coloring, scars and other features.

The photographer who first captures full-body pictures of the left and right side of a shark can pick its name, but many are just known by a number.

This shark was #24 -- which was also one of the numbers Bryant wore as a Los Angeles Laker.

That's not the only connection between Bryant and the shark.

Martin Graf, the diver, who photographed #24, actually took Bryant in a shark cage back in 2013 and gave him an up-close look at two great whites.

Graf runs Shark Diver, which takes divers out to Guadalupe Island for encounters with great whites. He was on a cruise ship with limited internet access, but Cindy Michaels, the director of communications for Shark Diver shared the story with CNN.

She says he met up with their dive boat in a private yacht.

"He got into our cages and he spent a good short chunk of the day, hanging out on the boat and in the cages," she said.

Bryant told Graf that he became interested in sharks when he was living in Italy as a kid, she said.

The designs of some of Bryant's Nike shoes were inspired by sharks and he wrote in a 2017 article for The Players' Tribune that he studied great whites to help him prepare to guard Philadelphia 76ers star Allen Iverson.

Divers wear wetsuits and weights in the cage and breathe through a hose known as a hookah that is attached to a regulator, Michaels told CNN.

"We didn't have a big enough booties for him so he had to wear his own sneakers into the cage," she said.

Once Shark Diver and MCSI decided to name the shark after Bryant, they announced the news to their social media followers with minimal fanfare.

"Our hearts go out to everyone involved and the families and friends and we just, we want to make it special for them and for the shark community and those who are his fellow divers," Michaels said. "I think it's just kind of a cool thing to do for him."

She said they have not been in touch with the Lakers or with Bryant's family, but she would love for them to know that the shark community appreciated him.