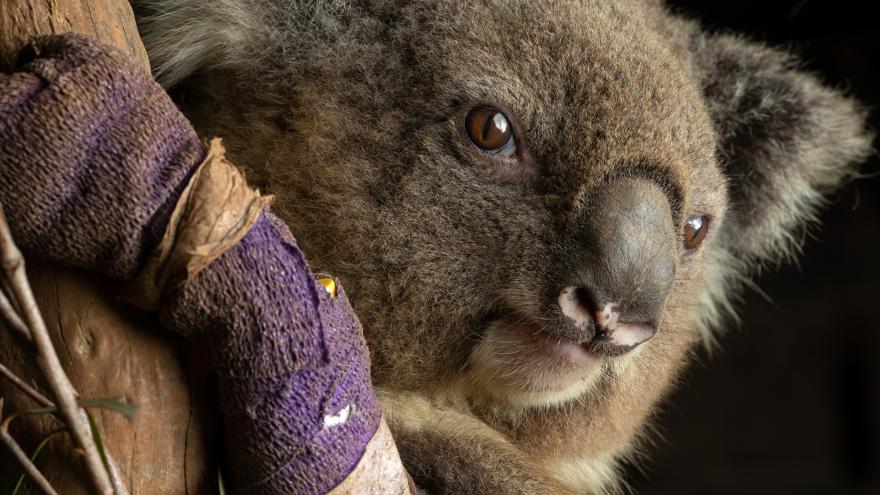 (CNN) -- It has been a stressful year for Australia's koalas. Their health and natural environment, however, have been under threat for a long time.

Bushfires, habitat fragmentation, vehicle collisions and dog attacks -- all which hurt koalas -- have been getting worse over the last decade.

That has led to species population decline and increased disease among koalas, according to new research published Wednesday in the academic journal PLOS ONE.

The number of diseased koalas increased over the course of 30 years, while the number of sick koalas that could be released back into the wild dropped, the study said. It analyzed 29 years' worth of data on koala sightings and animal hospital admissions from three wildlife rescue groups in New South Wales, Australia.

A combination of environmental impacts and human disturbance of koala habitats, researchers found, have made Australia's iconic marsupials vulnerable to extinction.

"In the last 10 years, we can see koala rescues ramped up significantly because more koalas are being found out in the open and on the ground," said lead author Edward Narayan, a senior lecturer of animal science at the University of Queensland.

That's not a good sign for a tree-dwelling species. For their survival, koalas rely on eucalyptus trees, which they use for food but also to find refuge and breed.

Environmental degradation, rising global temperatures and droughts have led to more koalas falling to the ground because tree leaves dry out and no longer have enough water or nutrients, according to researchers at the University of Sydney in a separate study.

Over and beyond koala injuries and deaths due to habitat loss and human encroachment, Narayan said koalas are in danger because long-term, chronic stress is hurting their immune systems.

"Humans have all these artificial coping mechanisms to cope with stress, but with animals, the problem is that most small animals are good at hiding their fear," Narayan said. "You cannot tell if an animal is sick or not unless it becomes very sick."

The most common reason a koala was reported or admitted for clinical care was disease -- including signs of infections, poor body condition and organ damage, the University of Queensland study data revealed.

"We also found that the disease cases are increasing, so there are more koalas found with higher prevalence of chlamydia, which is one of the diseases that affects koalas," Narayan told CNN. "As a result, more koalas are having to be euthanized, unfortunately."

Human population growth has had an increasingly negative impact on koala populations through a variety of stressors, according to Narayan.

"One of the biggest factors is land clearance," Narayan said. "What's happening is koalas are facing more and more pressure on the outskirts of the cities. That habitat corridor is more vulnerable ... we can see these bubbles of new housing development impacting koalas."

Agriculture also plays a role in the decline of koalas, as more natural land is cleared for agricultural development, Narayan added. Sustainable agriculture practices and nature conservation, the study's researchers argue, are vital for saving koalas.

Climate change is also contributing to the decline of koalas. For example, droughts lead to more dehydrated koalas and fewer healthy trees for them to call home.

And Australia experienced record-breaking bushfires in 2019 and 2020, which were likely made worse by climate change, according to a report by the New South Wales Bushfire Inquiry. Fires are nothing new in Australia, but they have been becoming more intense and more destructive in recent years, a problem exacerbated by the climate crisis.

Almost a third of koalas in New South Wales may have been killed in recent bushfires, which also destroyed about a third of their habitat, Australia Minister for the Environment Sussan Ley said in December 2019.

O'Gorman added that efforts to double koala numbers by 2050 would also benefit many other species as well as boost the economies of regional communities.

"WWF is excited to trial specialised drones, with some models capable of planting 40,000 seeds a day, to create corridors so that koalas and other wildlife can move across a landscape fragmented by fire and land clearing," he said.

"The koalas carry the voice of Australia's environment," he said, adding that their decline alludes to a larger crisis in the natural world. "The amount of damage that has been to the planet -- we can't hide from it.

"Eventually what will happen with this effect on nature is that we will be creating our own grave, in a way," Narayan added. "If animals are sick, if frogs don't sing, and if koalas can't breathe, then that's a good sign that the natural environment is no longer healthy."