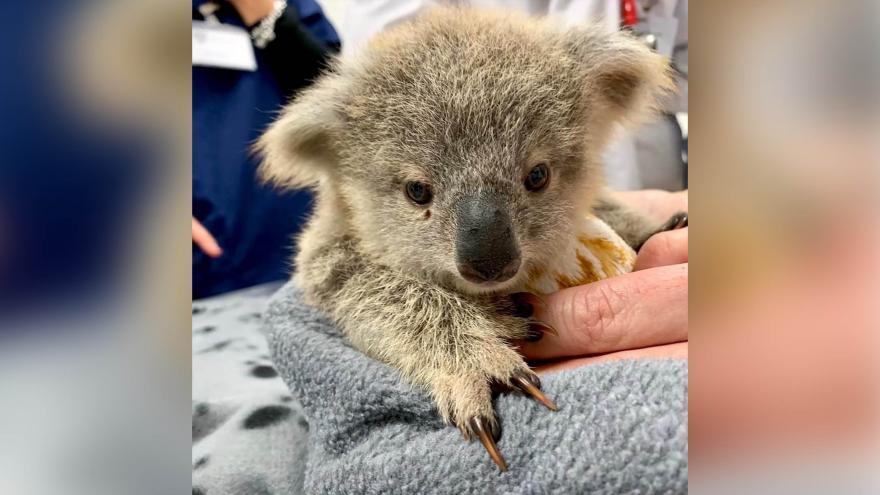 (CNN) -- Following the devastating bushfires in Australia, there is now a significant and immediate threat of extinction to the koala population, according to a new report.

A minimum of 5,000 koalas are estimated to have died, according to the report released Wednesday by the global conservation group International Fund for Animal Welfare (IFAW).
That's nearly 12 percent of the animal's population in New South Wales (NSW).

These estimates are an intentionally conservative calculations, IFAW Wildlife Campaigner Josey Sharrad told CNN in an email. The actual number is likely to be much higher.

"Koalas are particularly vulnerable to bushfires as they are slow moving and live in eucalyptus trees that burn quickly and intensely," Sharrad said.

"When fires sweep through their homes, they often don't have time to escape, particularly in intense crown fires that rage through the treetops where they live," she added.

Finding "an immediate, ongoing and significant threat of extinction," the report states that koalas are eligible for a provisional listing as Endangered on an emergency basis under the NSW Biodiversity Conservation Act of 2016.

The endangered listing would last for two years to allow the species the breathing space to being to recover while experts further evaluate the situation.

"Our koalas only stand a chance if we help," Sharrad said. "They are literally fighting for their survival."

Over the last three generations, nearly two-thirds of the population has been lost to drought, bushfires and man-made causes.

Koalas were already living on the brink before these fires and are most vulnerable to climate change, deforestation, and land-clearing.

"This rapid destruction of koala habitat, combined with climate change, is inflicting substantial stress and pushing the species towards extinction," Sharrad said.

"Reduction and fragmentation of koala habitat exposes koalas to the added threats of vehicle strikes, dog attacks, stress and disease," she added.

With climate change and high-frequency fire only likely to increase, there are significant challenges for the longer-term survival, and for many populations the chances of recovery are unlikely, the study said.

Sharrad told CNN she hopes NSW Environment Minister Matt Kean will call for the provisional uplisting of the koala species to Endangered and declare its habitat as an "area of outstanding biodiversity value."

Nearly every animal coming into their care right now is already dehydrated or malnourished from prolonged drought and excessive land-clearing, Sharrad said.

"Koalas were already living on a knife edge before the fires, and this could be the last straw," she said.