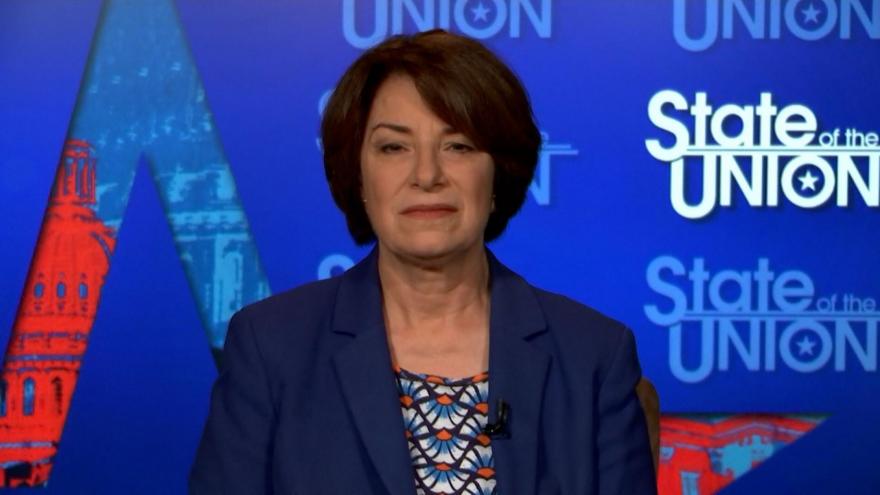 Minnesota Sen. Amy Klobuchar on Sunday criticized the US Supreme Court's decision to allow a restrictive abortion law in Texas to stand as "blatantly against" the landmark decision it made nearly 50 years ago establishing women's constitutional right to end a pregnancy.

(CNN) -- Democratic Sen. Amy Klobuchar called for immediate action from Democrats in the wake of the US Supreme Court allowing Texas' restrictive abortion law to stand and said the filibuster should be abolished in order to codify abortion rights protections.

"Now and over the next years, we just will get nowhere if we keep this filibuster in place," the Minnesota Democrat, who has previously come out against ending the filibuster to address issues like voting rights and climate change, told CNN's Dana Bash on "State of the Union" Sunday.

House Speaker Nancy Pelosi said last week the chamber would take legislative action when the House returns from recess and "bring up Congresswoman Judy Chu's Women's Health Protection Act to enshrine into law reproductive health care for all women across America." But even if a bill on the issue were to pass in the House it is likely to face hurdles in the Senate where Democrats hold a narrow majority and 60 votes are required to break the filibuster. There is no indication 10 Republican senators would side with them on the issue.

In a midnight order last week, the high court denied a request from Texas abortion providers to stop the state law that bans abortions after six weeks despite the fact that it violates Roe v. Wade, a 1973 opinion legalizing abortion nationwide prior to viability. The Texas law, which is one of the strictest in the country, has drawn outrage from Democrats and sparked concerns that the Supreme Court could overturn or undercut the longstanding decision.

"This decision that they made with the state of Texas is unbelievable," Klobuchar said. "Here you have them this year, this week, basically telling women in Texas that 85% of them seeking abortion services cannot exercise their constitutional rights. ... And basically greenlighted a law that is blatantly against Roe v. Wade."

Louisiana Sen. Bill Cassidy, a Republican, said Sunday that backlash over the Supreme Court's decision regarding the Texas law is being used for political theater by Democrats to "distract" from the other issues facing the party.

"People are using it to gin up their base to distract from disastrous policies in Afghanistan, maybe for fundraising appeals," Cassidy said in an interview on ABC's "This Week." "If it is as terrible as people say it is, it'll be destroyed by the Supreme Court, but to act like this is an assault upon Roe v. Wade is again something that the President's doing I think to distract from his other issues."

Calls to change the high court

The Supreme Court's decision has also renewed calls to reform the makeup of the high court and for liberal Justice Stephen Breyer to retire, including by Klobuchar who reiterated her stance he should do so "sooner rather than later."

"I believe, if he is seriously considering retirement -- and he has said he would do it based on not only his own health, but also the future of the court -- if this decision doesn't cry out for that, I don't -- I don't know what does," she told Bash. She also added that she supports adding more seats to the Supreme Court, but that she doesn't think the current make up is "going to change any time in the near future."

Democratic Rep. Veronica Escobar of Texas said Sunday that people are "shocked, horrified, outraged" in her state about the law and said she supports expanding the Supreme Court.

"I do think we also need to expand the court. We have now seen SCOTUS basically engage in late night decisions through their shadow docket. We've seen them become an activist court. We need to restore integrity to the court," Escobar said in an interview on CBS' "Face The Nation."