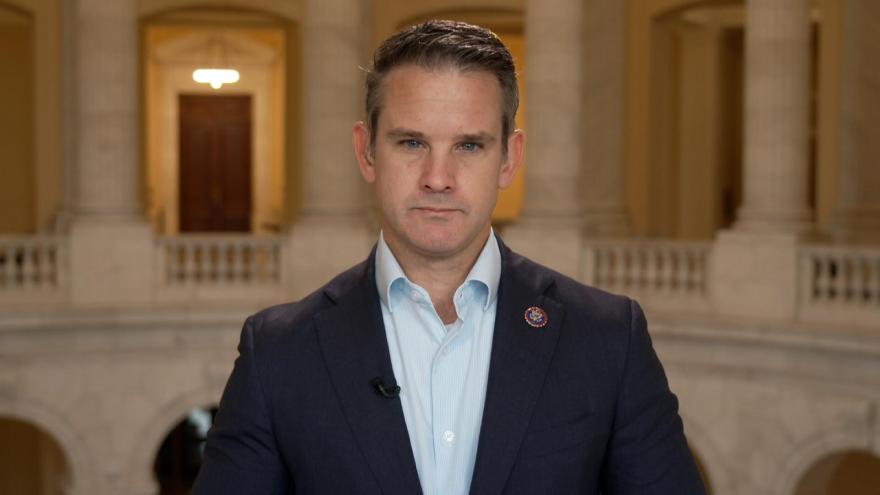 Rep. Adam Kinzinger said Tuesday he is seeing some positive developments out of the Justice Department's investigation into the January 6th Capitol riot.

(CNN) -- Rep. Adam Kinzinger, one of the two Republicans serving on the House select committee investigating the January 6, 2021, Capitol riot, said Tuesday he is seeing some positive developments out of the Justice Department's investigation into the riot.

Kinzinger was speaking to CNN's Brianna Keilar on "New Day" after it was revealed that Marc Short, the former chief of staff to Vice President Mike Pence, confirmed that he testified last week in front of a grand jury investigating the insurrection.

"Well, I mean, I look at it and it says obviously there's some interest," Kinzinger said. "There was a lot of frustration, just kind of personally, for the last, I guess, year and a half, like, what's DOJ doing? I think our investigation, though it is not a criminal investigation, certainly has brought some things to light that DOJ is watching, and it seems like between that and some of the search warrants that have been served and some of the other things that we have seen, that they are moving forward."

He later added, "That said, if they are moving forward on looking at this stuff, that's positive for the country, even if, for the short term, it may be hard."

Short's participation in the investigation -- which CNN reported earlier, citing a source familiar with the matter -- makes him the highest-profile witness known to have testified in the criminal investigation into the attack on the US Capitol. His testimony signals that prosecutors are scrutinizing the Trump White House as part of their investigation, which has expanded beyond the rioters who breached the Capitol.

Although Kinzinger said Tuesday that he did not know what the Justice Department asked Short, or what DOJ is focused on in its investigation specifically, he said Short knew Pence's mindset and "he certainly knows a lot of what happened and I think, under oath, you can be pretty much committed that he'll tell the truth."

Earlier this year, the Justice Department expanded its investigation beyond the rioters who breached the Capitol into fundraising and organizing for the political rally that served as a prelude to the riot as well as into efforts to subvert the Electoral College vote count.

The Justice Department has issued several subpoenas to Republican operatives connected to the scheme to put forward "alternate" electors, and the grand jury heard testimony from "Stop the Steal" organizer Ali Alexander in June.

Kinzinger described the committee's relationship with DOJ as a "decent working relationship" but would not share specifically what the panel is sharing with the department other than saying they are cooperating in "certain areas."

Kinzinger also was asked by Keilar about the anonymous Trump White House security official who testified to the committee that Pence's Secret Service detail was afraid for their lives on January 6, when Short previously told CNN he was "skeptical" of that characterization.

"I mean, look, that official said it under oath, I mean, Short can have a different perception of what happened," Kinzinger said. "The point is, we heard the radio traffic. They were very concerned. Very rarely do you hear Secret Service in a heightened state saying we're about to have our exit cut off."

Kinzinger, one of 10 Republican members of Congress who voted to impeach then-President Donald Trump over the Capitol riot and who has since announced his retirement at the end of his current term, on Tuesday admonished GOP Sen. Tom Cotton for criticizing the committee's hearings without watching them. Republican leaders who still claim the election was stolen are "abusing" and "lying" to Republican voters, Kinzinger said.

But the Illinois Republican didn't hesitate to criticize Democrats who are helping election deniers win down-ballot primaries in the hopes of making easier matchups in November.

"I think it's disgusting," Kinzinger said. "While I think a certain number of Democrats truly understand that democracy is threatened, don't come to me after having spent money supporting an election denier in a primary, and then come to me and say, 'where are all the good Republicans?' "