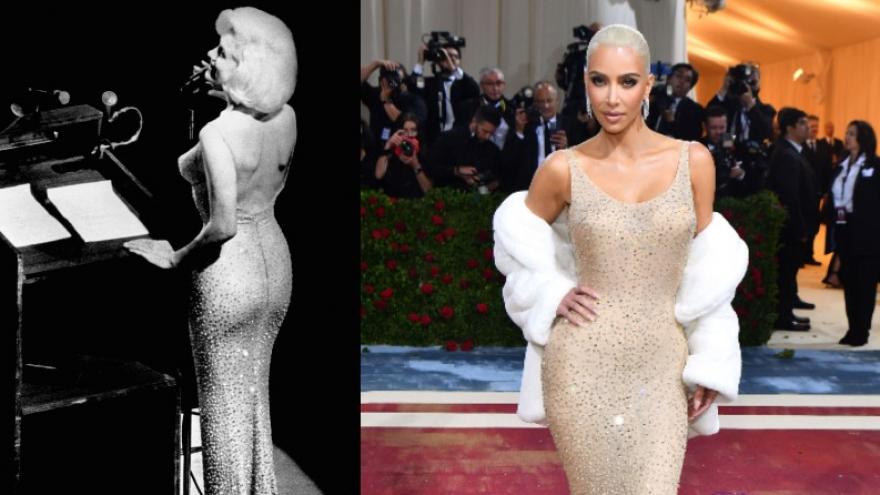 (CNN) -- As the Met Gala red carpet drew to a close on Monday night, Kim Kardashian arrived fashionably late in a sparkling skin-tight gown once worn by Marilyn Monroe. Adorned with over 6,000 handsewn crystals, the pre-loved dress was worn by Monroe when she famously sang "Happy Birthday" to President John F. Kennedy in 1962.

While certainly glamorous, Kardashian opted for a fairly loose interpretation of the evening's theme that centered around America's Gilded Age -- a period during the last 30 years of the 19th century when industrialization rapidly amplified the country's wealth gap.

Created 60 years ago by Hollywood designer Jean Louis, with help from Bob Mackie, the shimmering dress is one of Monroe's most iconic looks. It was loaned to Kardashian by the Ripley's Believe it or Not!, a museum and events franchise that purchased the gown for a record-breaking $4.8 million at a 2016 auction.

Speaking after Monroe's seductive performance for his 45th birthday, Kennedy said, "I can now retire from politics after having had 'Happy Birthday' sung to me in such a sweet, wholesome way."

The moment fanned rumors about the nature of Monroe and Kennedy's relationship.

Part of the legend surrounding Monroe's dress is that she had to be sewn into the figure-hugging gown and couldn't wear undergarments beneath it. It was so tight, she appeared to have trouble walking during her 1962 performance. Kardashian encountered similar difficulties on the Costume Institute's red carpet where she was seen carefully shuffling up the stairs, with help from her boyfriend Pete Davidson. According to her agreement with Ripley's, no alterations were allowed to be made to the dress though she later changed into a replica for the rest of the event.

Kardashian told Vogue she lost 16 pounds in just three weeks to fit into the garment: "It was such a challenge, it was like a role. I was determined to fit it. I don't think they believed I was gonna do it, but I did it."

While her look was met with cheers on the night and plenty of positive feedback, some social media users criticized Kardashian for glamourizing her weight loss, a topic she has previously drawn anger for in the past. One user called her rapid change of weight "extremely unhealthy," while another encouraged her to "think about the influence of what you say," adding that discussing extreme weight loss is "harmful." Another added they felt her "message is so damaging to young girls watching."

Speaking of this year's Met Gala gown, Kardashian tweeted that she was "honored" to be the first person to wear the dress since Monroe donned it decades ago, saying, "I am forever grateful for this moment."

Ripley's tweeted the reality star: "You are truly the Marilyn of our time."