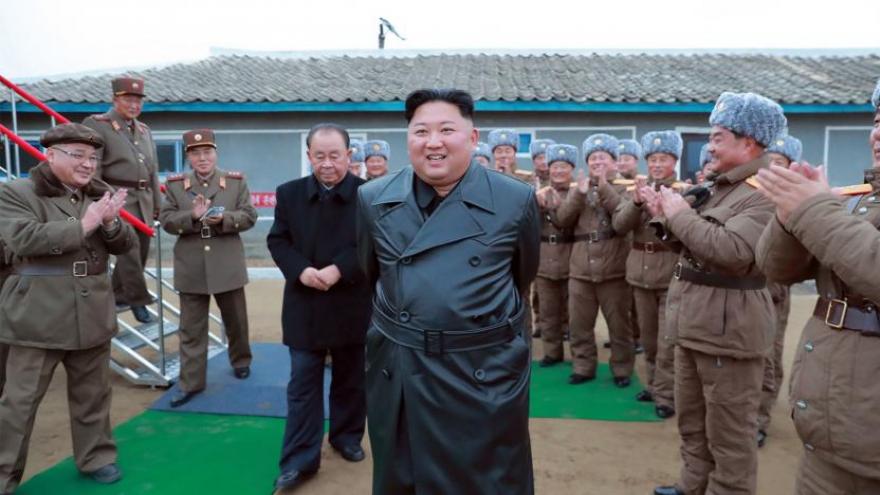 North Korean Leader Kim Jong Un said that there "will never" be denuclearization on the Korean peninsula if the US "persists in its hostile policy towards" the hermit nation, according to the country's state news agency.

(CNN) -- North Korean Leader Kim Jong Un said Tuesday that there "will never" be denuclearization on the Korean Peninsula if the US "persists in its hostile policy towards" the hermit nation, according to the country's state news agency.

At a meeting of ruling party officials, the North Korean leader also said his country's long term security will be guaranteed by staying on constant alert and relying on "the powerful nuclear deterrent capable of containing the nuclear threats from the US," according to the Korean Central News Agency.

KCNA released the report at the end of "The 5th Plenary Meeting of the 7th Central Committee of the Workers' Party of Korea." In the plenary, Kim said "the DPRK will steadily develop necessary and prerequisite strategic weapons for the security of the state until the US rolls back its hostile policy towards the DPRK and lasting and durable peace-keeping mechanism is built."

In an indication that North Korea could soon resume nuclear weapon testing, Kim said his country should no longer feel bound by its self-imposed halt on nuclear weapons and long-range missile testing. He also announced that "the world will witness a new strategic weapon" in the near future, KCNA reported.

Later Tuesday, President Donald Trump told reporters he was still optimistic about the future of diplomacy -- despite Kim's new rhetoric. Touting his relationship with Kim, Trump said he believed the North Korean leader was a "man of his word."

"He likes me, I like him, we get along," he said. "He did sign an agreement talking about denuclearization ... I think he's a man of his word, so we're going to find out."

Secretary of State Mike Pompeo told Fox News earlier Tuesday that he hoped Kim "doesn't go in that direction" and instead will "choose peace and prosperity over conflict and war."

The US is "hopeful" that Kim "will make the right decision," he said, also telling CBS Evening News that "if Chairman Kim has reneged on the commitments he made to President Trump, that is deeply disappointing."

"We've lived up to our commitments, we continue to hold out hope that he'll live up to his as well," Pompeo said.

Kim was expected to give his annual New Year's speech on Wednesday -- a highly anticipated address as he had said he would only give the United States until the end of 2019 to change its negotiating strategy.

But at the time of reporting, the speech had not gone ahead. Kim had given a New Year's speech ever year since 2013, and traditionally used the address to make major announcements, update his people on a handful of government policies, and chart a direction for the country in the coming months.

A 'Christmas gift' to the US

Kim's latest threats come as American officials closely monitor North Korea following its promise in December to deliver a "Christmas gift" to the US.

The specific language -- North Korea referred to its first successful intercontinental ballistic missile (ICBM) launch in 2017 as a "gift" -- sparked speculation that Pyongyang could do something equally provocative, though the holiday came and went without any weapons test.

A source familiar with the North Korean leadership's current mindset told CNN ahead of Christmas that the "gift" was more likely to be a new, hardline policy in which Kim would reinforce the state ideology of self-reliance as a means of improving the economy -- a pledge Kim made to his people in 2018 -- rather than pursuing sanctions relief in exchange for denuclearization.

Trump said on Christmas Eve that the US would be ready to handle the "gift," whatever it was. On Tuesday night, he again downplayed the prospect of a "Christmas gift" the North has threatened. "I hope his Christmas present is a beautiful vase," he joked.

Former national security adviser John Bolton said in a tweet Wednesday that the US should "resume all canceled or down-sized military exercises in South Korea" in response to Kim's threat. Bolton also called on Congress to hold hearings "on whether US troops are truly ready" to respond to any kind of attack.

On Sunday, national security adviser Robert O'Brien said the US is prepared to take action if the so-called gift is delivered, including a potential long-range missile test. Pompeo said Monday that the US is watching Pyongyang "very closely" in light of the "Christmas gift" threat.

The country had promised the gift if the US doesn't provide concessions like sanctions relief by its self-imposed, year-end deadline. The Trump administration had widely interpreted the promise of a "Christmas gift" to mean a weapons test, especially as intelligence indicators grew. Though no such tests have been detected from North Korea since Christmas, officials have remained watchful in the days following the holiday.

The KCNA report Tuesday said that Kim "solemnly declared that there is no need to hesitate with any expectation of the US lift of sanctions even now that we had close look into the real intention of the US."

The leader also said North Korea "will reliably put on constant alert the powerful nuclear deterrent capable of containing the nuclear threats from the US," the state news agency reported.

This, Kim said, will guarantee "our long-term security, noting that the scope and depth of bolstering our deterrent will be properly coordinated depending on the (US') future attitude (toward) the DPRK."

Kim's harder line could have political ramifications for Trump and his reelection campaign. Trump and his administration have sold the talks as an important foreign policy win, but Kim's new policy could spell a return to the tense days of 2017 when the two leaders traded insults and threats of nuclear war.

The two sides already started employing some of that rhetoric last month in the lead-up to the deadline. Trump revived his "Rocket Man" moniker for Kim, and North Korean state media referred to the US President as a "dotard" -- an archaic insult for a senile old person that Pyongyang first used to insult Trump after his address at the UN General Assembly in 2017.

While North Korea may be publicly blaming the Trump administration for the stalled talks, political calculations are also likely at play.

The source familiar with the North Korean leadership's current mindset said Pyongyang views Trump as politically vulnerable due to his impeachment and the looming 2020 presidential election.

Joseph Yun, the former US special representative for North Korea policy, weighed in on the matter on Wednesday, telling CNN's Jim Sciutto on "Newsroom" that "Kim is definitely, definitely playing Trump."

"No, (Kim) has not signed a deal for denuclearization," he said. "And, in fact, if you ask most experts in and out of the government, they would agree there is no denuclearization within short-term horizon."

Analysts believe Pyongyang is worried that if it does cut a deal with Trump and he loses in November, his successor may not uphold the accord. North Korea and the United States have reached previous agreements that did not survive successive administrations.