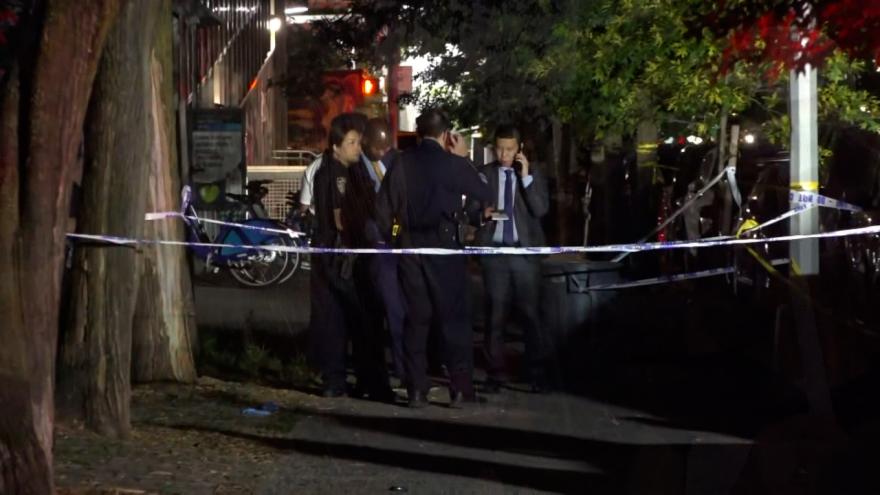 (CNN) -- The man accused of killing a young mother Wednesday as she pushed her 3-month-old baby in a stroller on New York's Upper East Side was remanded without bail Saturday in what prosecutors called a "premeditated execution," according to the Manhattan District Attorney's Office.

The court hearing came days after the shocking killing of 20-year-old Azsia Johnson, who was shot in the head at point-blank range near the intersection of East 95th Street and Lexington Avenue on Wednesday night, authorities said. The suspect, wearing all black and a ski mask, then fled on foot, police said. The 3-month-old child was not harmed.

Argro was arrested and charged with the killing Friday. In a statement prosecutors read in court Saturday, the Manhattan District Attorney's Office described the attack as a "premeditated execution" and offered further disturbing details about the case.

Before the killing, Argro persuaded Johnson to "meet up with him under the guise that he wanted to give the decedent items for their 3-month-old daughter," prosecutors said.

"The defendant arrived with no such items, dressed all in black with a ski mask over his face, an outfit that indicated that he planned ahead and attempted to obstruct his face and conceal his identity," the prosecutor's office said. "Video of the defendant before the homicide shows him pacing prior to the decedent's arrival. The defendant shot the mother of his child at point-blank range in the head, leaving his crying 3-month-old in the stroller, as he ran away."

CNN reached out to Argro's attorney on Sunday and did not receive an immediate response. He is next due to appear in court this Thursday, July 7.

The brazen killing, in an upscale neighborhood known for its wealthy residents, came amid heightened concerns of gun violence in New York City as well as a string of high-profile shootings nationally, including massacres at an upstate New York supermarket and an elementary school in Texas. In the aftermath of those shootings, President Joe Biden late last month signed into law the first major federal gun safety legislation passed in decades.

"A woman is pushing a baby carriage down the block and is shot in point-blank range. It shows just how this national problem is impacting families," New York City Mayor Eric Adams said in a news conference following the shooting. "It doesn't matter if you are on the Upper East Side or East New York, Brooklyn."

In a statement after Argro's arrest Friday, Adams said Johnson's family "is hurting, they deserve justice, and we will deliver it."

Investigators were able to learn the child's age and other details about Johnson from domestic incident reports on which her name appeared, one official previously told CNN. The reports include her name, those listed as former boyfriends and the name of a second child who was not with her at the time of the shooting, CNN has reported.

The mayor previously declined to say where the baby was after the shooting, but added city officials were in touch with family members.

In January, the mayor unveiled a "Blueprint to End Gun Violence," which includes long-term goals to grow economic opportunities, improve child education and provide more access to mental health resources while addressing the gun crisis. And earlier Wednesday, authorities in the state announced they were filing lawsuits against so-called ghost gun retailers to try and hinder the proliferation of mail-order components used to make untraceable guns that lead to shootings.

On Friday, New York Gov. Kathy Hochul signed into law a bill restricting the concealed carry of firearms in locations such as government buildings and schools. That comes after a Supreme Court ruling last week that struck down the state's century-old law placing restrictions on carrying concealed handguns outside the home.

Last month, the governor also signed a legislative package tightening state gun laws, including a law that raised the minimum age to buy a semiautomatic rifle to 21.