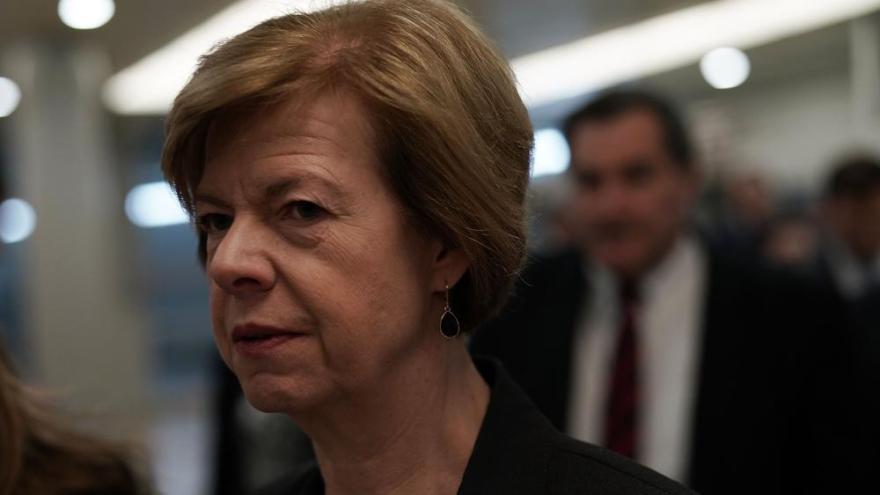 Senator Tammy Baldwin, a leading Democratic negotiator on a bill that would codify same-sex marriage nationwide, said that they need more time to negotiate the issue with Republicans and wants to delay any vote until after the November midterm elections..

(CNN) -- The Senate will punt on a vote over same-sex marriage legislation until after the November midterm elections as negotiators ask for more time to lock down support -- a move that could make it more likely the bill will ultimately pass the chamber.

Sen. Tammy Baldwin, a leading Democratic negotiator on the bill that would codify same-sex marriage nationwide, said Thursday that more time is needed to negotiate the issue with Republicans -- and wants to delay any vote in the Senate until after the November midterm elections.

"We're very confident that the bill will pass, but we will need a little more time," Baldwin told CNN.

Democrats had originally been eyeing a Senate vote before this fall's midterms -- potentially even as soon as next week. Now, Baldwin says she wants the bill to come up "the day after the election."

Senate Majority Leader Chuck Schumer has vowed to hold a vote on the bill, but timing has been uncertain as it has been unclear if there will be the needed 10 GOP votes to overcome a filibuster and advance the legislation toward final passage.

"Because Leader Schumer's main objective is to pass this important legislation, he will adhere to the bipartisan group of Senators' request to delay floor action, and he is 100 percent committed to holding a vote on the legislation this year," Justin Goodman, a Schumer spokesperson, said. "Leader Schumer will not give up and will hold the bipartisan group to their promise that the votes to pass this marriage equality legislation will be there after the election."

Democrats have pushed for the vote after the Supreme Court overturned Roe v. Wade, sparking fears that the court could take aim at same-sex marriage in the future.

A Senate vote on same-sex marriage ahead of the midterms could have put vulnerable Republicans up for reelection in a difficult spot. And lawmakers on both sides of the aisle have said that the fast-approaching midterms added a complicating factor to efforts to lock in the votes necessary to pass a bill. Pushing back the timeline until after the midterms may make it more likely for a key test vote to succeed.

A bipartisan group made up of Baldwin and other senators has been working to negotiate as a handful of Republicans with religious liberty concerns have signaled they might vote for the bill if it's amended.

In a statement on Thursday afternoon, Baldwin along with GOP Sens. Susan Collins of Maine, Rob Portman of Ohio and Thom Tillis of North Carolina and Democratic Sen. Kyrsten Sinema of Arizona said that Schumer had agreed to a request for more time.

"We've asked Leader Schumer for additional time and we appreciate he has agreed," the statement said. The group also said, "Through bipartisan collaboration, we've crafted commonsense language that respects religious liberty and Americans' diverse beliefs, while upholding our view that marriage embodies the highest ideals of love, devotion, and family."

"We are confident that when our legislation comes to the Senate floor for a vote, we will have the bipartisan support to pass the bill," the senators said.

Portman separately confirmed that the group was seeking to delay the vote, saying GOP senators are asking for "more time to digest it."

"The possibility of a strong bipartisan vote after the elections seems more likely," Portman said.

Tillis said, "People who have been negotiating this want an outcome," and the chances improve after the elections. He said the group made the recommendation to Schumer to hold off.

Tillis told reporters that there had been concerns that voting on the same-sex marriage bill ahead of the election was a political move.

"Some said the timing of the vote was political. This is clearly, I think, a situation where we want to make our members feel comfortable with it, and I'm confident we'll ultimately pass it," Tillis said.

On the bill itself, Tillis said, "We have just put together language that is finalized, that has tremendous I think respect for the input that we received on religious freedom."

Republican Sen. Ron Johnson, who is in a tight reelection race in Baldwin's home state of Wisconsin, had expressed an openness to support the bill until conservative groups raised concerns about religious liberties.

"People have raised some very serious and legitimate concerns about religious liberty," he said. "I appreciate the authors of the bill are attempting to address it. But this takes some time to consider, OK? They shouldn't rush it, it's not ready."

He would not commit to how he would vote if the religious liberty concerns were resolved.

Senate Democratic Whip Dick Durbin said that Republicans are worried about a political backlash if they vote for the bill.

"More Republicans should have stepped up and said where they stood," Durbin said. "But clearly there are some that are on the fence and afraid of the vote."

Sen. Roy Blunt, a Republican from Missouri who is retiring at the end of the session, said he has not made up his mind on how he will vote. He was asked why the bill might have a better chance of passing after the midterm elections than before.

"If you do it after the election, it's clearly not something that you're doing just for a political purpose and I think people will think about it more thoughtfully because of that and a handful of them likely to decide to be somewhere after the election than they would have been with vote that was purely -- likely -- a political ploy," he said.

Some Republicans, however, argued that most lawmakers have already made up their minds on the bill, even if they have not yet publicly said how they will vote -- and have suggested that delaying the vote until after the election may not change much.

GOP Sen. John Cornyn of Texas, who said he opposes the bill, warned that by putting the vote off until the election, politicians are avoiding "electoral accountability."

"I can't imagine anybody's undecided about it," he said.