Key committee marks up its part of the $3.5 trillion budget package with some of it aimed at natural disasters 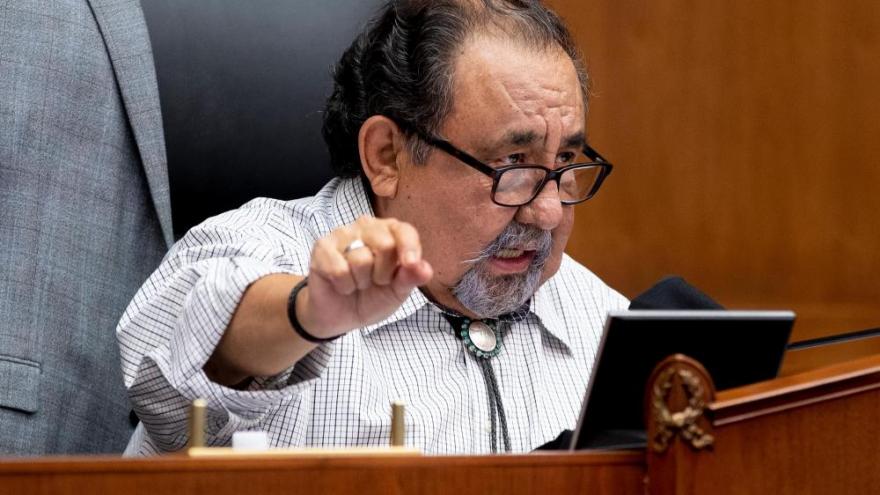 Chairman of the House Natural Resources Committee, Democrat Raul Grijalva of Arizona, called the committee's legislation a "once in a lifetime" opportunity to invest in the environment and instate key mitigation strategies for future disasters.

(CNN) -- As remnants of Hurricane Ida create dangerous flash floods and tornadoes across the Northeast after leaving much of the South devastated, a key committee in the US House of Representatives is marking up its portion of the $3.5 trillion reconciliation package that includes future funding for natural disaster relief and prevention.

The House Natural Resources Committee has an allocated $25.6 billion as part of President Joe Biden's sweeping domestic agenda. The House has 13 committees of jurisdiction that have been working behind the scenes to get their portions of the reconciliation package done and ready for a floor vote by the end of the month.

The Natural Resources Committee oversees the Department of the Interior that manages our nation's public lands, waters and oceans, which amounts to one-fifth of the land in the United States. The committee also has a keen focus on providing resources for environmental justice and the rights of Native Americans on their lands.

Three billion dollars of the committee's allocated funds would be put towards reinstating the Civilian Climate Corps, an initiative that Biden wants to restart that would employ thousands of young people across the country to address the threat of climate change, maintain the nation's deteriorating public lands and improve its natural defenses. Three other House committees are also responsible for funding portions of the Climate Corps program.

Natural Resources Committee Chairman Raúl Grijalva, an Arizona Democrat, called the committee's legislation a "once in a lifetime" opportunity to invest in the environment and instate key mitigation strategies for future disasters on Thursday, but has previously said the funding allocated to the committee still does not go far enough to address the severity of natural disasters and the climate crisis

"We write to respectfully request significant additional funding for the Department of the Interior (DOI) in any final budget reconciliation deal. Unfortunately, the Senate-passed budget resolution does not address DOI funding shortfalls totaling tens of billions of dollars," Grijalva, along with other Democrats on the committee, said in a letter to House Speaker Nancy Pelosi and Senate Majority Leader Chuck Schumer.

"Simply put, we cannot claim to be taking climate change seriously if our budget fails to invest in essential DOI climate mitigation and resiliency programs," the group added.

Democratic Rep. Darren Soto of Florida, whose community has seen its own devastation from natural disasters, talked about the historic nature of this legislation.

"Are we just going to sit here and watch as hurricanes get worse and worse in the Southeast? Heck no. We're going to act," Soto said. "That's what this legislation does."

Moderate Democratic Reps. Ed Case of Hawaii and Jim Costa of California both voiced concerns for the lack of ways to pay for the committee's portion of the bill and criticized the fact that the Senate has largely controlled the process, but said they both planned to vote yes in the committee. Case and Costa were part of the group of moderates pushing Democratic leadership to get an earlier, guaranteed vote on a separate but connected $1.2 trillion bipartisan infrastructure bill.

Republicans throughout the hearing on Thursday criticized Democrats for throwing more government spending at the issue of climate change without clear plans on how to pay for it, and even argued that this legislation makes the US more dependent on international adversaries, which they argued would put the United States in an even more precarious position given the fallout of pulling troops from Afghanistan.

GOP Rep. Garret Graves of Louisiana, whose community was ravaged by Hurricane Ida criticized his colleagues for holding this markup hearing amidst a natural disaster.

"We have people that are trying to live in homes without roofs, homes that have fallen down, and you're sitting here doing a markup to spend how every many gazillion dollars you want to spend?" Graves said, "This is just really ill-timed, it's insensitive, it's not paying attention to the realities on the ground. And I urge you, just have a little humanity and just take a break. This is just stupid. It is. It's just stupid that I've got to take time from doing what I need to be doing to help get people the resources."

In a letter sent to congressional Democrats last week, Schumer said the new analysis showed the combined impact of both bills would put the US on track to reduce its greenhouse gas emissions by approximately 45% below 2005 levels by 2030 and said that additional actions from the Biden administration and states could push that to 50% by 2030, which is the President's goal.

Many experts view Biden's 2030 target as a critical step for the US to get to net-zero emissions by 2050, a target scientists warn the world's largest carbon emitters must hit to limit global warming to 1.5 degrees Celsius.

"Woe is us if we don't recognize these changes are due to climate change," Schumer said at a Thursday news conference in flood devastated Queens, New York. "Woe is us if we don't do something about it quickly, both in building resilient infrastructure and going to clean power, whether it's in homes, in electricity, in transportation, to stop the global warming or at least reduce its awful effects on this country."

Schumer's analysis showed the vast majority of the emissions reduction would be achieved through tax credits for clean energy, and a Clean Electricity Payment Program -- which would give incentives and payments to electricity utilities to move to clean electricity and penalize those who keep using fossil fuel-generated power. Much of the work writing the CEPP will be overseen by the Senate Energy and Natural Resources Committee, which is chaired by pivotal Democratic swing vote Sen. Joe Manchin of West Virginia.

Manchin and fellow moderate Democratic Sen. Kyrsten Sinema of Arizona are two key lawmakers to watch on the issue of funding to combat climate change, which is expected to be included in the $3.5 trillion reconciliation bill the House is currently writing.

Manchin told CNN last month when the Senate was in session that he's "very, very disturbed" by provisions he believes would eliminate fossil fuels.

"I know they have the climate portion in here, and I'm concerned about that," Manchin said at the time.

He added: "Because if they're eliminating fossils, and I'm finding out there's a lot of language in places they're eliminating fossils, which is very, very disturbing, because if you're sticking your head in the sand, and saying that fossil (fuel) has to be eliminated in America, and they want to get rid of it, and thinking that's going to clean up the global climate, it won't clean it up all. If anything, it would be worse."

Democrats are still drafting the language for their bill that would expand the social safety net, which would go through the budget reconciliation process and only needs a simple majority to pass.

For this reason, Democratic leaders need all 50 Democratic senators to sign on to the legislation for it to pass — meaning they need Sinema and Manchin too.

Manchin complicated the course of the legislation in an op-ed published Thursday calling on fellow Democrats to "hit a strategic pause on the budget-reconciliation legislation," referring to the party's massive go-it-alone budget bill that would implement most of Biden's agenda.

He wrote he cannot agree to the $3.5 trillion plan "or anywhere near that level of additional spending."

"Instead of rushing to spend trillions on new government programs and additional stimulus funding, Congress should hit a strategic pause on the budget-reconciliation legislation," he wrote in the op-ed. "A pause is warranted because it will provide more clarity on the trajectory of the pandemic, and it will allow us to determine whether inflation is transitory or not."

He added: "While some have suggested this reconciliation legislation must be passed now, I believe that making budgetary decisions under artificial political deadlines never leads to good policy or sound decisions. I have always said if I can't explain it, I can't vote for it, and I can't explain why my Democratic colleagues are rushing to spend $3.5 trillion."

While her office did not respond to a request for comment Thursday, Sinema's spokesperson told CNN last month she still didn't support a $3.5 trillion price tag.

"Proceedings in the U.S. House will have no impact on Kyrsten's views about what is best for our country — including the fact that she will not support a budget reconciliation bill that costs $3.5 trillion," her spokesperson John LaBombard told CNN.