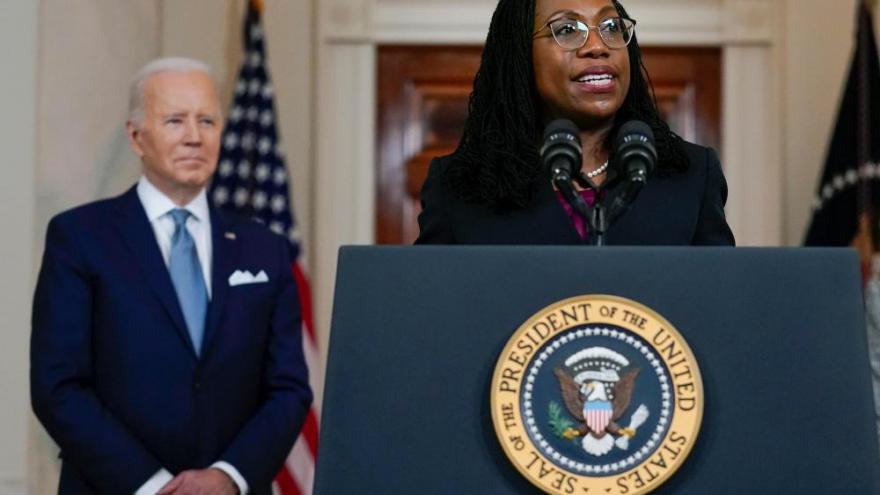 Judge Ketanji Brown Jackson speaks after President Joe Biden announced Jackson as his nominee to the Supreme Court in the Cross Hall of the White House in Washington.

(CNN) -- Judge Ketanji Brown Jackson will hold meetings with top Democratic and Republican senators on Wednesday, a White House official tells CNN, as the confirmation process for the President's nominee to the Supreme Court gets underway.

Jackson spent time this weekend beginning to prepare for the Senate confirmation process with a team of White House lawyers and aides.

Democrats are hoping for a swift and bipartisan confirmation process for the US District Court judge, who would make history as the first Black woman to sit on the Supreme Court. Senate Democratic leaders hope to have a vote confirming Jackson to the court by mid-April.

The White House says Jackson will meet with any senator who requests a meeting. Several other meetings are set to be scheduled later this week, the official says.

"We wanted to start quickly, right out of the chute," former Alabama Sen. Doug Jones told CNN's John Berman on "New Day" Monday morning. Jones is guiding Jackson through the confirmation process, a role known in Washington circles as a "sherpa."

"We hope this is going to move quickly," Jones said. "We're at the kind of mercy of the hands of the Senate right now, but we want to make sure that she's ready for her meetings and for her confirmation hearing that should be coming up in a few weeks."

Jackson, 51, currently sits on DC's federal appellate court and had been considered the front-runner for the vacancy since Justice Stephen Breyer announced his retirement. President Joe Biden officially nominated Jackson to the Supreme Court on Friday, praising her as a "nominee of extraordinary qualifications" whose opinions are "carefully reasoned, tethered to precedent and demonstrate respect for how the law impacts everyday people."

The President is hoping Jackson can garner bipartisan support in the Senate, but Democrats will need all their members in Washington to ensure her confirmation. Unlike for most major pieces of legislation, Democrats do not need Republicans help to confirm a Supreme Court justice and can do it with their 50 votes and Vice President Kamala Harris breaking a tie.

Jackon's confirmation to the high court will not change its ideological makeup. The court currently has six conservative justices and three liberal justices -- and the retiring Breyer comes from the liberal camp. The court is already poised to continue its turn toward the right with high-profile cases and rulings expected from the court in the coming months on abortion, gun control and religious liberty issues.