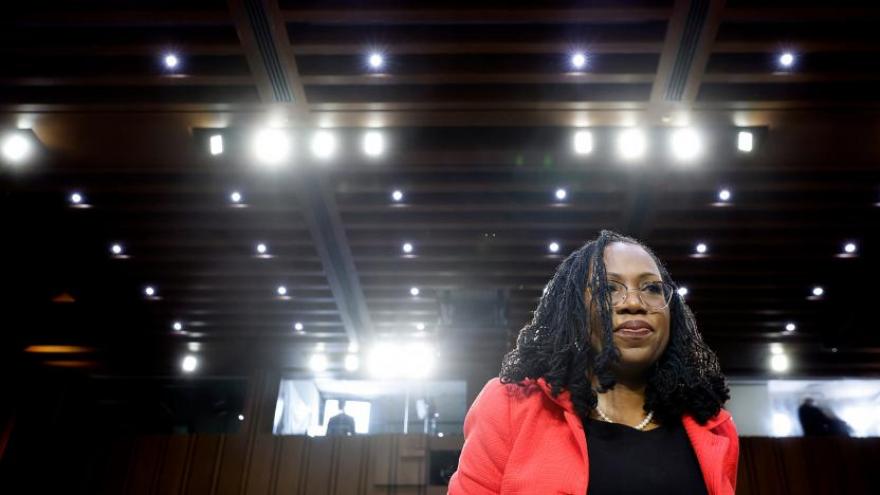 (CNN) -- Judge Ketanji Brown Jackson is expected to be confirmed as the first Black woman Supreme Court justice this week, after a bipartisan group of senators voted on Monday to advance her nomination.

After the Senate Judiciary Committee voted 11-11, Senate Majority Leader Chuck Schumer called for a vote to break the deadlock and send her nomination to the floor. Every Democrat and three Republican senators -- Susan Collins of Maine, Mitt Romney of Utah and Lisa Murkowski of Alaska -- voted in support of Jackson.

Senate Republican and Democratic leaders agree that Jackson is a well-qualified nominee, but almost all GOP senators are expected to oppose her. Jackson, 51, sits on DC's federal appellate court and had been considered the front-runner for the vacancy since Justice Stephen Breyer announced his retirement. Jackson previously worked as a clerk for Breyer, a federal public defender, an attorney in private practice, a federal district court judge and a member of the US Sentencing Commission.

"Justice Jackson will bring to the Supreme Court, the highest level of skill, integrity, civility and grace," said Illinois Democratic Sen. Dick Durbin, the Judiciary Committee chairman, in explaining his support for her on Monday. "This committee's action today is nothing less than making history. I'm honored to be part of it."

But the vast majority of Senate Republicans will oppose her, citing concerns with her judicial philosophy, or lack thereof, her sentencing in some criminal cases and her advocacy for certain clients. So far, only three Senate Republicans -- Collins, Romney and Murkowski -- have said they would support Jackson.

"My support rests on Judge Jackson's qualifications, which no one questions; her demonstrated judicial independence; her demeanor and temperament; and the important perspective she would bring to the court as a replacement for Justice Breyer," said Murkowski on Monday. "It also rests on my rejection of the corrosive politicization of the review process for Supreme Court nominees, which, on both sides of the aisle, is growing worse and more detached from reality by the year."

Some GOP senators said on Monday they were not swayed by Jackson's assertion that she does not have a judicial philosophy per se but instead a methodology that ensures she rules impartially.

"The judge must call balls and strikes," said Texas GOP Sen. John Cornyn, alluding to Chief Justice John Roberts' metaphor comparing a judge to an umpire. "And given what I've seen, and her unwillingness to disclose her judicial philosophy, and disavow an expansionist view of unenumerated rights, I have concerns that Judge Jackson will be pinch hitting for one team or the other."

Other Republican senators portrayed Jackson as a pawn of the "radical left." Texas Sen. Ted Cruz said he believed "she will prove to be the most extreme and the furthest-left justice ever to serve on the United States Supreme Court." Arkansas Sen. Tom Cotton said Jackson would "coddle criminals and terrorists." And Missouri Sen. Josh Hawley lambasted her sentencing decisions in some child pornography cases.

Democrats said that some Republicans were fear-mongering and cherry-picking cases, noting she authored over 550 cases in her eight years as a district judge and had already been confirmed by the Senate to three prior positions. California Sen. Dianne Feinstein said that Jackson "had the very low reversal rate of only 2%." Connecticut Sen. Richard Blumenthal said the GOP had engaged in "meritless demagoguery" and "concocted outrage." And New Jersey Sen. Cory Booker noted Jackson's support from law enforcement groups, including the International Association of Chiefs of Police and the Fraternal Order of Police, and those advocating for victims like the National Children's Alliance.

One potential Republican vote for Jackson was South Carolina Sen. Lindsey Graham, who supported Jackson a year ago for her current job. But he said last week that he would oppose her, citing her sentencing for cases of child pornography and representation of detainees at Guantanamo Bay.

Graham, a member of the Judiciary Committee, said that while Jackson exhibits "exceptionally good character," she was too lenient in sentencing those cases and had an "activist zeal" in calling former President George W. Bush and former Defense Secretary Donald Rumsfeld war criminals in legal briefs as she advocated for a detainee.

"My decision is based upon her record of judicial activism, flawed sentencing methodology regarding child pornography cases and a belief Judge Jackson will not be deterred by the plain meaning of the law when it comes to liberal causes," said Graham.

An in-depth CNN review of the child pornography cases showed that Jackson had mostly followed common judicial sentencing practices. It has become a norm among judges to issue sentences below the guidelines in such cases that don't involve producing the pornography itself. As for her advocacy for Guantanamo detainees, Jackson argued that they had been tortured and subjected to other inhumane treatment but did not explicitly use the phrase "war criminal." Jackson's four detainee clients were not convicted and were eventually released from Guantanamo.

Durbin refuted Graham on both issues on the Senate floor last week, calling Jackson "in the mainstream of sentencing" of child pornography cases and saying Republicans have also voted for President Donald Trump's judges who "do exactly the same thing she does." He said it was a "gross exaggeration and unfair on its face" to say that Jackson had called Bush administration officials "war criminals."

It's rare for the Senate Judiciary Committee to tie on a Supreme Court nomination. But nomination battles have become increasingly contentious, and the current Senate is split 50-50, so there are an even number of Democrats and Republicans on the panel, rather than the majority party holding more seats.

In 1987, Democrats who controlled the committee voted to unfavorably recommend President Ronald Reagan's nominee Robert Bork on ideological grounds. And in 2020, Democrats boycotted a committee vote on Barrett, arguing that the chamber should not consider President Donald Trump's lifetime appointment to the court while the country was voting in the presidential election.

In the Trump era, Senate Republicans strengthened the conservatives' grip on the court from 5-4 to 6-3, after holding up President Barack Obama's nominee Merrick Garland during another election year -- 2016 -- and then confirming Gorsuch in 2017, and Coney Barrett in 2020 to replace the late Ginsburg. Jackson's confirmation would likely replace a liberal -- Breyer -- with another.

"I think all indications are that Judge Jackson is going to be a liberal activist from the bench," said Senate GOP Leader Mitch McConnell on Fox last week. "But the good news for people like me, is the Court is still 6-3."

"We made massive changes over the last four years that I think put the Court in a very solid position with a great number of judges who believe in the quaint notion that maybe a judge ought to follow the law," he added.